« What Happened to Our Friendly Enterococci? | Main | Talmudic Question #87 » 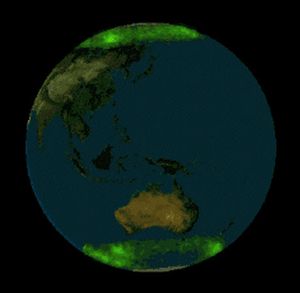 All bacteria, even those that are spherical, display geometric asymmetries during at least part of their life cycle, and it appears that cells take advantage of these asymmetries to localize cellular components to specific sites. So begins a paper by Li and Young that describes a novel approach for detecting E. coli proteins that preferentially localize to the cell poles. There is already a considerable catalog of “polar” proteins in various bacteria, some involved in chemotaxis, signaling, regulation of septation, flagella synthesis, phage attachment, and a raft of other phenomena. Pretty soon you may be tempted to ask which proteins do not localize to the poles. This may sound facetious, but it illustrates the recent changes in mindset regarding the structural complexities of the prokaryotic cell. But many questions remain. We readily subscribe to the notion that bacteria are not bags of enzymes but this begs the broad question “what are they?”

As the authors point out, findings of pole-localized proteins have been largely accidental, when researchers weren’t specifically looking for them. They contend that the time has come to be more systematic about this matter. Granted, some workers had earlier looked at minicells as proxies for the poles because each had started life as a pole of their mother cell. Others had fused specific cellular proteins to fluorescent proteins such as GFP and then simply screened the cells under the microscope looking for those where fluorescence accumulated at the poles. These researchers, instead, set out to develop a novel technique to intentionally and specifically pull out “polar” proteins. Their technique uses affinity chromatography of an inner membrane protein known to be localized in the polar regions. The idea was to tag the protein with an epitope and retrieve membrane vesicles that contain it by using beads coated with an antibody against that epitope. The underlying rationale is that neighboring membrane proteins in the same vesicles can be assumed to come along for the ride. Sure enough, this approach worked: they identified this way some new “polar proteins” as well as some previously known to be pole-located . 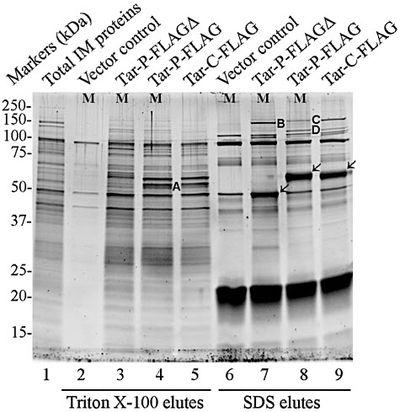 Protein profiles in polar and non-polar vesicles. Pole-derived vesicles labelled with Tar-P-FLAG or Tar-C-FLAG and non-pole-derived vesicles labelled with Tar-P-FLAGD were isolated by affinity capture by using anti-FLAG beads. Triton X-100- and SDS-eluted samples were separated on a 12% SDS-PAGE gel and stained with Sypro Ruby. Total inner membrane (IM) proteins from E. coli MG1655 cell envelopes were solubilized with Triton X-100 and loaded for comparison (lane 1). Protein bands to the left of each capital letter were removed and identified by mass spectrometry. (A) Tar, Tsr, Tap and Trg; (B) MukB; (C and D) Tar multimers. Tar-FLAG bands are indicated by arrows. M, gel lanes subjected to full-lane GeLC-MS/MS analysis. Source.

The authors chose as the affinity lure a pole-associated protein, the chemoreceptor Tar. This is a well-studied inner membrane protein that is relatively abundant at the poles. They tagged it with a short epitope, a widely used octapeptide called FLAG, which they engineered into a periplasmic loop of Tar. The methods and controls used in the paper are worthwhile reading. In brief, they used a plasmid carrying the modified Tar gene to express the Tar-FLAG protein in E. coli cells. Next they ran the cells through a high shear fluid processor to generate membrane vesicles. Because the FLAG tag extends into the periplasm, it would be exposed on the outside of any right-side out inner membrane vesicles. They now fished out the vesicles containing Tar-FLAG by mixing them with beads coated with anti-FLAG antibody. SDS-agarose electrophoresis showed that they had enriched for specific protein bands that were identified by mass spec. By using a modified Tar protein that has lost its polar specificity, they also showed that this technique could retrieve non-polar membrane proteins.

The authors identified an impressive number of proteins (22) found only at the poles. Some were known, some were new. Another set consisted of proteins were detected at both polar and non-polar locations, with some of them being enriched at the poles. Among the most abundant proteins at the poles were, as expected, the chemotaxis proteins (Tar, Tsr, Tap, Trg, and CheA). To establish that their other candidate “polar” proteins are, in fact, polar, they selected 15 of them for construction of GFP fusions. Four of the fusion proteins (Aer, YqjD, TnaA, and GroES) exhibited detectable GFP fluorescence by microscopy. 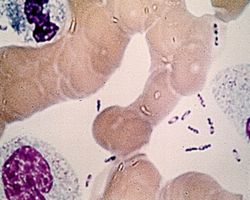 The plague bacillus, Yersinia pestis, in a bloody exudate. Note the characteristic safety pin appearance of the bacteria, which are the small blue rods in the midst of red and white blood cells. Source: CDC.

There are pertinent caveats when interpreting experimental data as evidence of polar localization, one being that denatured or misfolded proteins tend to aggregate into inclusion bodies that find their way to the poles. This leads me to a small digression: In my early days, I learned that stained cells of the plague bacillus (Yersinia pestis), the agent of melioidosis (Burkholderia pseudomallei), and some others, look like a safety pin, that is, the dye used for staining them accumulates at the poles. What is enriched are polyphosphate storage granules or, in other species, stored glycogen, sulfur, or polyhydroxyalkanoates. Back to this paper, the authors were able to show that their polar proteins were not in inclusion bodies. They used an mCherry-tagged chaperone protein (IbpA) that is involved in processing protein aggregates and which labels them in vivo. They detected no fluorescence in the cells. Another nice control: the polar location of the GFP-fused proteins was not somehow determined by Tar because the same fluorescence results were obtained in the absence of Tar. 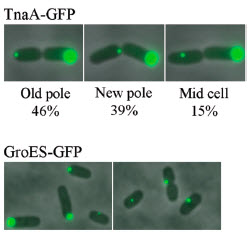 Origin of TnaA and GroES polar foci. Percen-tages of nascent (smaller) TnaA foci observed at the old pole, at the new pole or at midcell. Note that nascent polar foci might have originated at midcell in a previous generation. Nascent GroES foci were located most often at midcell. Source.

Two of the three fusion proteins found to be polar, TnaA–GFP and GroES–GFP, formed only a single focus per cell. Since the proteins were localized at the poles at different times during growth of the cultures, they concluded that TnaA and GroES get there independently and are each unaffected by the other, even when expressed in excess. Thus, there are different ways to get to the poles. Of interest was also the observation that polar localization of three protein, TnaA, GroES, and YqjD, was disrupted in cells lacking the MinCDE proteins, which is known to operate in cell division by helping to place the septum at mid-cell. This suggests that this system may also help localize proteins that are not involved in cell division.

Where are we now regarding polar location? The authors posit that our knowledge is seriously incomplete. There is no comprehensive inventory of polar constituents, we know little about how they travel to the poles. Are they attached to something? Is the location transient or continuous? The list of possible explanations for polar predilection is rather short but a few examples stand out. For instance, in a rod-shaped cell with a single flagellum, such as Caulobacter or Vibrio, it would make little sense to sprout the structure in the middle of the cell. Ditto for bacteria such as Listeria or Shigella which, when inside host cells, recruit cytoplasmic actin to a pole-located protein and use that for movement. And doesn't it seem sensible that chemotactic proteins should be associated with one pole, which functions as a “nose” to “smell” attractants or repellents? The list goes on a bit further to include the role of the poles in chromosome replication and segregation, phage receptors, and DNA uptake.

So, this is a mixed bag. In some cases, the polar location of proteins and cell structures makes good sense and helps us understand their function. Surely, as implied in this paper, these salient examples are but the tip of the polar iceberg. Much more awaits discovery. You can say that also for the two poles of our earthly concern.