Quotes from the Grab Bag

Late this Tuesday, Merry pointed out that we didn't have a piece for our Thursday posting. As aficionados of this blog may have noticed, we reserve the weightier pieces for Mondays, and publish shorter, lighter ones on Thursdays. In panic, I had to dig into my grab bag, looking for something to post. In lieu of something original, I came up with quotes that have spoken to me at different times. Please send in your cherished quotes and, before too long, we will post them as well.

The juvenile sea squirt wanders through the sea searching for a suitable rock or hunk of coral to cling to and make its home for life. For this task, it has a rudimentary nervous system. When it finds its spot and takes root, it doesn't need its brain anymore so it eats it! It's rather like getting tenure.
Daniel Dennett (from Consciousness Explained

A theory that fits all the facts is bound to be wrong as some of the facts will be wrong.
Francis Crick

It is a very good morning exercise for a research scientist to discard a pet hypothesis every day before breakfast.
Konrad Lorenz (from On Aggression)

The prototype [of the great pathologist]is not the liberator releasing slaves, the good Samaritan lifting up the fallen, but the dog sniffing tremendously at an infinite series of rat-holes.
H.L. Mencken

A theory is a policy rather than a creed.
Joseph J. Thomson

The capacity to blunder slightly is the real marvel of DNA. Without this special attribute, we would still be anaerobic bacteria and there would be no music.
Lewis Thomas

Life would not long be possible in the absence of microbes.
Louis Pasteur

The primary aim of bacteriology as taught in this department is to equip the student to do, and of hygiene to live, rightly. The power of observation, the indefinite refining value upon the individual sometimes called culture, the ability to concentrate the mind, the capacity to study, —all belong to this subject…
Bacteriology and Hygiene Department curriculum, 1902-1903 Michigan State University Catalog.

And a few more… 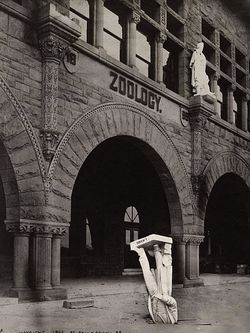 (Right) A visual quote from Hollis who blogs at In the Company of Plants and Rocks. The statue is of the anti-evolutionist Louis Agassiz himself! Head plant courtesy of Mother Nature via 1906 San Francisco earthquake.

I have little patience with scientists who take a board of wood, look for its thinnest part, and drill a great number of holes where drilling is easy.
Albert Einstein

And, saying that it is the only quote hanging in his office for the past 30 years:

There is no expedient to which a man will not resort to avoid the real labor of thinking.
Thomas A. Edison