The Bacterial Resistome is Both Ancient and Surprising 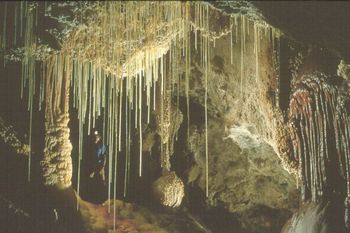 The Soda Straw Room in the Lechuguilla Cave. These pencil-thin stalactites are called soda straws from their size and the fact they have a central canal through which mineral-laden water flows. Although it is not uncommon for soda straws to grow three to five feet long, the ones in this room are as long as 15 feet. Credit: Norm Thompson. Source.

One of the many interesting controversies that microbiologists can ponder today is whether the alarming proliferation of antibiotic-resistant strains is primarily a consequence of the widespread use of antibiotics in humans and in animal husbandry. An examination of bacteria isolated from terrestrial animals in the Galapagos, a remote location with limited exposure to humans, revealed  an absence of antibiotic resistance genes. Likewise, plasmids from bacterial collections that predate the antibiotic era were mostly devoid of resistance elements. Furthermore, a study of Dutch soil samples showed an increase in antibiotic resistance genes in contemporary samplings as compared to those from the pre-antibiotic era. On the other hand, antibiotic resistance genes were both abundant and diverse in ancient DNA recovered from Pleistocene deposits (30,000 years ago). Likewise, a survey of present-day actinomycetes revealed that multidrug resistance was prevalent even though human sources of antibiotics were presumed absent in this environment. It should be noted, however, that the actinomycetes are prolific antibiotic producers and thus it is not surprising to find resistance elements enriched in this group.

In order to further explore the evolution of the resistome, Bhullar and co-workers cultured bacteria isolated from the Lechuguilla Cave located within Carlsbad National Park in New Mexico. The deep recesses of this cave have been isolated from surface input for the past 4-7 million years and therefore constitute an ideal locale for carrying out this study. The Lechuguilla bacterial collection, consisting of 31 Gram-positive and 62 Gram-negative strains, was screened against 26 antimicrobial agents. Similar to their surface cousins, most of the cave strains were multidrug resistant; a few were resistant to 14 of the antimicrobials tested. Unlike surface bacteria, however, few or none of the surveyed cave bacteria exhibited resistance to the synthetic antibiotics ciprofloxacin and linezolid or to the natural product antibiotics tetracycline, vancomycin, and rifampicin. A previous study found that all of 480 soil-derived bacterial isolates were resistant to daptomycin, compared to only about 1/6 of these from the cave. 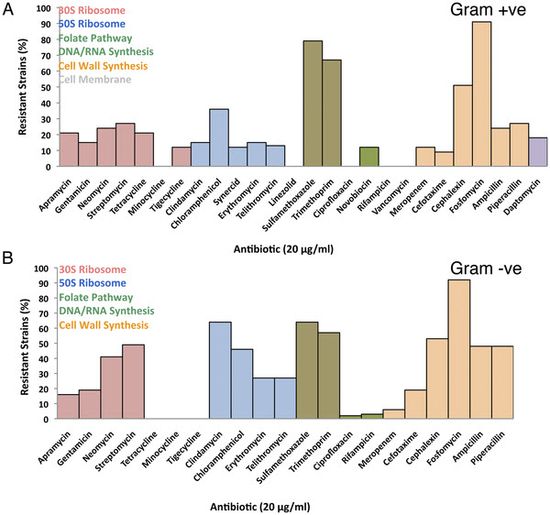 Resistance levels of Lechuguilla cave bacteria at 20 μg/ml against various antibiotics: (top) Gram-positive strains (bottom) Gram-negative strains. Antibiotics are grouped according to their mode of action/target, where each color represents a different target. Source.

These researchers identified several antibiotic inactivation mechanisms in cave bacteria that had not been previously observed in those particular species, two of which are of special interest. Four strains of Paenibacillus lautus inactivated daptomycin probably via a metalloesterase that hydrolytically opens the ring structure. Daptomycin inactivation had not previously been found in the Firmicutes. Macrolide inactivation in the cave bacterium Brachybacterium paraconglomeratum resulted from phosphorylation by a kinase of the MPH class. Previously identified mph genes are encoded on plasmids found in resistant isolates of pathogenic strains of Escherichia coli, Staphylococcus aureus, Pasteurella multocida, and Pseudomonas aeruginosa. Were those mph genes housed in the pathogens acquired by horizontal gene transfer from environmental saprophytes such as this cave dweller?

The take-home message from this paper is that the bacterial antibiotic resistome is both ancient and genetically diverse. The warning here for the clinical community is that there are still plenty of new genes out there in the environment that can be appropriated by disease-producing bacteria in order to escape death by the action of our antimicrobial agents. On the other hand, the good news coming from these findings is that there are many compounds with antibiotic activity just waiting to be discovered.