What Happened to Our Friendly Enterococci?

Enterococci had been generally regarded as benign commensals, a part of our healthy intestinal microbiota. They were even invited in, being used as probiotics. But then, in the late 1970s, the first multiple drug-resistant strains appeared, and vancomycin-resistant strains followed in 1981. In recent decades, they have taken center stage as one of the pathogens most commonly associated with nosocomial infections. Enterococcal infections are particularly difficult to manage now because these bugs have accumulated numerous virulence genes and antibiotic resistance factors. What happened?

First, a few facts about these organisms. Enterococcus is a genus of Gram-positive lactic acid bacteria in the phylum Firmicutes. They used to be called streptococci because their typically paired cells look so similar. The two species found in our intestines, E. faecalis (90–95%) and E. faecium (5–10%), are facultative anaerobes.

Now here’s your first clue as to their change into pathogens. Hospital-adapted strains have more DNA than their benign relations—more than 600 kb of additional coding potential, enough for hundreds of genes—mostly in the form of acquired mobile elements. The first enterococcus to have its genome sequenced was one such hospital-adapted E. faecalis strain. I’ll have more to say about this strain (V583) later. One quarter of its genome is composed of mobile elements, including three independently replicating plasmids, three chromosomally integrated plasmid remnants, seven prophages, and a pathogenicity island. Here reside several virulence genes as well as antibiotic resistance factors. 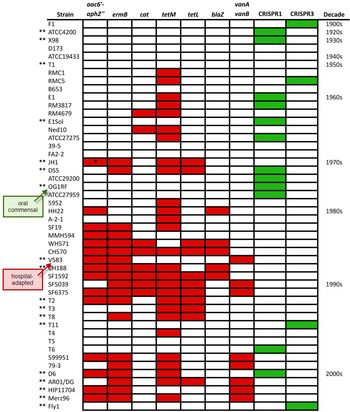 Functional CRISPR loci and acquired antibiotic resistance in a historical collection of E. faecalis strains. (Click figure for larger version.) E. faecalis strains are listed by date of isolation, from oldest to most recent. Acquired antibiotic resistance is shown in red, and the presence of a functional CRISPR defense is shown in green. Antibiotic resistance genes: tetracycline (tetL and tetM), erythromycin (ermB), gentamicin (aac6’–aph2’’), chloramphenicol (cat), ampicillin (blaZ), and vancomycin (vanA and vanB). ** = strains for which draft or complete genome sequences are available. The specific commensal oral strain and multiple drug-resistant hospital-adapted strain discussed in the text are noted. Source.

The second clue: That same sequenced hospital-adapted strain does not have a functional CRISPR defense against incoming mobile elements and it carries multiple drug resistance factors (and virulence genes). In contrast, an antibiotic-sensitive oral E. faecalis isolate (OG1RF) has a CRISPR defense and contains few mobile elements. Hmmmm… makes one wonder. To see if this correlation applies to other strains, researchers analyzed 45 E. faecalis isolates, some of which predated the antibiotic era. Strains without CRISPRs were associated with more antibiotic resistance traits (see figure). They also surveyed eight E. faecium genomes and found the same pattern. This seems to make sense. One might expect that strains that had lost their CRISPR defense would be more apt to acquire mobile elements carrying antibiotic resistance factors. Such strains would fare well, i.e., would be under strong positive selection, in the antibiotic-rich hospital environment.

Correlations, even statistically significant correlations such as this, do not prove causation. However, here’s a piece of supporting experimental evidence. These strains carry pheromone-responsive plasmids that are experts at HGT between closely-related bacterial strains. These plasmids shut down the synthesis of specific pheromones by their host. When in the vicinity of plasmid-free cells, the plasmids respond to the pheromones by inducing their own host to initiate mating, thus greatly increasing the frequency of plasmid transfer to suitable host cells. Earlier these researchers showed that plasmids in the hospital-adapted strain can transfer large segments of chromosomal DNA, including the vancomycin resistance factor, into the chromosome of the oral commensal strain. In a more recent paper, they demonstrate that a single conjugative transfer event can produce a new strain that is both antibiotic resistant and lacking a functional CRISPR locus. Under some circumstances, such a strain would be at a disadvantage because it would be less able to defend its genome against invasion by foreign elements. However, the ability to acquire mobile elements carrying useful antibiotic resistance factors and virulence genes would provide the new strain with a ticket for success in a hospital setting.

So perhaps this is what happened to our commensal enterococci. If so, then we played a part in their replacement. Our antibiotics can be effective in ways we don’t even realize.