Fine Reading: Cnidarians and Dinoflagellates Together 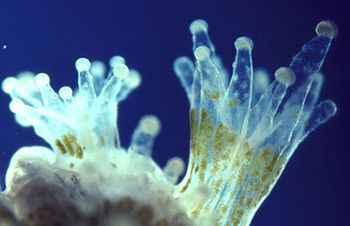 The very word infection brings to mind the arrival of a nasty pathogen countered by a host immune response, a battleground strewn with the carcasses of the losers. But how do you define infection? Is not the beginning of an endosymbiosis, even a mutually beneficial one, also an infection? Corals, anemones, and other Cnidarians have been infected for millions of years. They are among the numerous marine invertebrates that have established endosymbioses with photosynthetic partners, their partners being dinoflagellate algae of the genus Symbiodinium (commonly referred to as zooxanthellae, or zoox for short). While some Cnidarians pass their endosymbionts to their offspring, others have to be “infected” anew each generation. The intricacies of this relationship between Cnidarians and their dinoflagellates is the subject of an exhaustive review (424 cited references!) by Davy, Allemand, and Weis. Here you’ll find many questions to ponder, each presented as a mini-review that includes what is known,  the research that provided those answers, and current hypotheses about the remaining questions. Here is a sampling of those questions.

During the initial establishment of the symbiosis, how does, for example, a coral host recognize the right sort of dinoflagellate and reject the others? After being phagocytosed, how does the dinoflagellate escape being digested and instead manage to convert a phagosome into a hospitable membrane-bounded compartment. Corals possess an innate immune system similar to vertebrates, including genes for lectins, and, sure enough, glycans are found on the surface of the Symbiodinium. So, does the coral mount an immune response against the “invader” and if so, how does the symbiont counter that defense? As in other “infections,” MAMPs (microbe-associated molecular patterns) meet host PRRs (pattern recognition receptors), but here recognition of suitable algae leads to a mutually satisfactory accommodation. 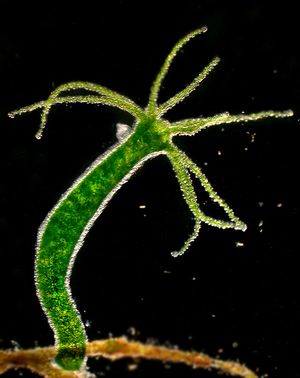 This animal could be lurking in a pond near you: green hydras are common in rivers and lakes. Their green hue is contributed by their Chlorella algal endosymbionts. Division of the Chlorella is syn-chronous with that of the host cell. When a hydra reproduces sexually, rather than by budding, algal cells pass to the next generation via the eggs. Source.

But even the right partner has to be keep in line. When free-living, the dinoflagellates divide far more rapidly than when in hospite.How does the Cnidarian host regulate the number of zoox per host cell? Is it by restricting nutrients such as nitrogen? Or by making the zoox relinquish to them most of their photosynthate? Are there, as has been proposed, “host release factors” that persuade the residents to produce more photosynthate and release more into the host cytoplasm? Notable among the Cnidarians, it is the reef-building corals with their zoox that are able to thrive in nutrient-poor waters. How do they take up nutrients efficiently, reuse, and recycle them? And, for that matter, why are zoox essential for reef building? This matters a great deal. As ocean acidification threatens to tip the balance from skeleton deposition toward dissolution, we badly need a greater understanding of the role of the endosymbionts in calcification.

As this review shows, research has been active in this field, providing enough answers, or partial answers, to whet the appetite. New techniques—gene expression profiling, new imaging techniques, and metabolite profiling, among others—promise rapid advances. Perhaps you want to participate. Of course, you might not have a coral reef available, but humbler organisms also offer opportunities. Consider the lowly freshwater green Hydra, also a Cnidarian. As the authors point out, the Hydra-Chlorella symbiosis is relatively well studied and has the potential to substantially inform our understanding of the cnidarian-dinoflagellate symbiosis, especially with regard to host-symbiont recognition and phagocytosis. If these question intrigue you, jump in, and start cultivating a Cnidarian in your own backyard.