« A Table for Two | Main | Fine Reading: Cnidarians and Dinoflagellates Together »

How an Endosymbiont Earns Tenure 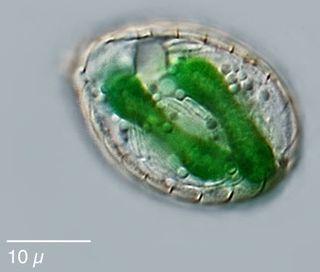 Plastids and mitochondria are organelles in eukaryotic cells that originated from bacterial endosymbionts via invasion or enslavement or a synergistic amalgamation, depending on your viewpoint.Since these events occurred more than one billion years ago, it has not been possible to trace the evolutionary steps in the transition from endosymbiont to mature organelle, a process referred to as organellogenesis. Enter the protozoan amoeba, Paulinella chromatophora. This protist may provide a “missing link,” a nexus between endosymbiosis and organellogenesis. Where does one draw the line between the two? It’s becoming more and more difficult to decide.

The road from temporary resident to obligate endosymbiont to organellar citizen is fraught with obstacles. Many proteins that do the work in today’s organelles are made on cytoplasmic ribosomes and then imported. The difficulties in evolving a protein import mechanism for an endosymbiont, wrapped as it is in multiple membranes of host and symbiont origin, was thought to be what made successful organellogenesis such an exceedingly rare occurrence. But Paulinella tells us this might not be so difficult after all. 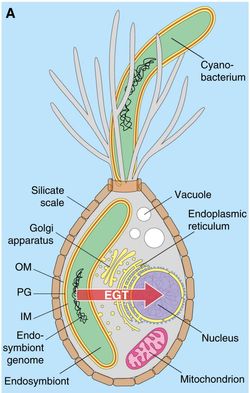 Paulinella chromatophora and its cyanobacterial endosymbionts (aka chromatophores, aka nascent organelles). These endosymbionts are surrounded by outer (OM) and inner (IM) membranes with the peptidoglycan wall (PG) located between them. Some of their genes already have moved to the host nucleus via endosymbiotic gene transfer (EGT). Source.

P. chromatophora cells live within their lucid shell composed of silica scales and crawl along the bottom of fresh water environments by means of thread-like (filose) pseudopodia. Each cell contains two photosynthetic entitiescalled chromatophores (CRs) (but unrelated to the pigmented cells in various metazoans that are, alas, also called chromatophores). When the cell divides, one is inherited by each daughter cell and promptly replicates. The CR of this amoeba is estimated to have first appeared relatively recently, perhaps only 60 million years ago. Thus this organism could be invaluable for studying early events of organellogenesis. Where did the CR come from? All previously known plastids originated from a single cyanobacterial ancestor. The CR of Paulinella tells a different story, making it truly unique in the sphere of organelles. Sequencing of its rDNA revealed that its ancestor was from a different group of cyanobacteria—the Prochlorococcus/Synechococcus clade, a cluster that happens to be the food for Paulinella’s phagotrophic close relatives. Thus this CR represents a different primary endosymbiosis. And we thought there had been only one cyanobacterium giving rise to all plastids! (For an earlier discussion of Paulinella’s iconoclastic residents, click here.)

Some things are known about organellogenesis in Paulinella. For example, the CR genome has undergone a 30% reduction from its presumed original size. It has everything it needs for photosynthesis, but the loss of numerous other essential genes makes it completely dependent on its amoeba host. Over 30 expressed genes have been relocated from the CR to the host nuclear genome, most of which encode small proteins that play some role in photosynthesis or acclimation to light. Three among them, psaE, psaK1 and psaK2, encode subunits of photosystem I (PSI), which is one of the two reaction centers required for oxygenic photosynthesis. The other nine PSI subunits are encoded by the CR genome.

In a recent paper, Nowack and Grossman report new insights into organellogenesis garnered from their studies of Paulinella. EM images of a P. chromatophora immunogold-labeled with antibodies to the protozoan (nuclear) PsaE protein showed a preferential localization of gold particles over the CR, with very few over the nucleus and cytoplasm. Within the CR, gold particles localized on thylakoid membranes and a few were seen over the carboxysomes. Thus, nuclear-encoded P. chromatophora PsaE. localizes to the CR and is probably associated with thylakoid membranes. This is a first—the first demonstration of a nuclear-encoded protein being trafficked to an endosymbiont compartment. More on this in a moment.

Do the proteins encoded by nuclear genes psaE, psaK1,and psaK2 come to be physically associated with PSI? The authors isolated relatively pure PSI from P. chromatophora cells, then separated the various subunits by SDS/PAGE. They determined the identity of the resolved subunits by immunoblot analysis employing antibodies raised to cyanobacterial or P. chromatophora subunits and by N-terminal sequencing. The results show that nuclear-encoded PsaE, PsaK1 and PsaK2 are indeed assembled into the PSI complex within the CR along with CR-encoded proteins.

Where are those three PSI proteins synthesized? To address this question, the authors labeled proteins of P. chromatophora with NaH14CO3 with and without translational inhibitors, chloramphenicol (which inhibits translation by 70S CR ribosomes) and cycloheximide (which inhibits translation by 80S cytoplasmic ribosomes), or both. Labeling of the proteins was abolished by cycloheximide but not by chloramphenicol, meaning that the nuclear-encoded PSI subunits are synthesized on cytoplasmic, not organellar ribosomes.

Immunogold-labeled antibodies to PsaE specifically labeled not only the CRs but also the Golgi, which suggests that routing of PsaE into CRs could involve intermediate vesicular transport through the Golgi. In many biological systems, cytoplasmically-synthesized proteins pass through the Golgi where they are sorted and sometimes modified as part of the secretory pathway.

Import of nuclear encoded proteins into CRs requires that they traverse two membranes: the outer one probably derived from the original host phagocytic membrane and the inner one being homologous to the cyanobacterial inner membrane. The vast majority of plastid proteins are encoded in the nucleus and are targeted to the organelle by cleavable N-terminal targeting presequences that interact with membrane complexes. These are called “translocons” (Toc in the Outer membrane of Chloroplasts and Tic in the Inner membrane). These translocons help the proteins across the membranes. But Paulinella does it differently—more evidence that its CRs are the product of an independent primary endosymbiosis. The three nuclear-encoded proteins that make their way into PSI in the CRs do not use the Tic/Toc mechanism to get there, and, based upon their full-length mRNA sequences, they do not appear to have identifiable ER-targeting signal peptides (SPs) either. PsaK1 and PsaK2 have a C-terminal transmembrane domain that might function as a targeting signal, but PsaE is a soluble protein and does not contain any known sequence that has a targeting function. So? Where does this leave us? The authors note: Clearly, additional information is required to elucidate mechanisms involved in targeting proteins to CRs. Much further work is required to fully understand the interesting problem of import pathways and the targeting of cytoplasmically synthesized proteins to the CR in P. chromatophora.

To put this in perspective, apart from known plastids and mitochondria, this is the first demonstration of endosymbiont-derived genes being not only transferred to the host’s nuclear genome and translated on host ribosomes, but subsequently trafficked to the endosymbiont compartment. Moreover, the three nuclear-encoded proteins studied here assemble with CR-encoded proteins to form a functional PSI complex—further evidence of the close integration of host and CR. The evolution of protein import mechanisms has been the hallmark of a true organelle, the criterion separating the organelles from the endosymbionts, and the difficult hurdle that was thought to make successful organellogenesis such an exceedingly rare occurrence. Where does this leave Paulinella’s CR—endosymbiont or organelle?

There are many endosymbionts known with reduced genomes that depend on metabolites transferred in from the surrounding host cytoplasm. But, in some cases, the genes they lost are ones that can’t be replaced simply by metabolite transfer, e.g., genes involved in DNA replication, transcription, and translation within the endosymbiont compartment. This makes it “almost certain” that host-encoded proteins are delivered to those endosymbionts. The authors conclude: Our study showcases P. chromatophora as an exceptional model in which to study early events in organellogenesis, and suggests that protein import into bacterial endosymbionts might be a phenomenon much more widespread than currently assumed.

They also leave us with an interesting thought. Maybe the first proteins targeted to an endosymbiont aren’t made at the endosymbionts behest, but might rather be host proteins that serve the host’s purposes. They might be how the host takes away endosymbiont independence. Invasion or enslavement?

Nowack EC, & Grossman AR (2012). Trafficking of protein into the recently established photosynthetic organelles of Paulinella chromatophora. Proceedings of the National Academy of Sciences of the United States of America, 109 (14), 5340-5 PMID: 22371600