Livestock Bacteria Are as Old as the Livestock They Kill

We are pleased to reprint here, with permission, a recent post from Thoughtomics, a Scientific American blog written by Lucas Brouwers. His subject matter? “Exploring evolution through genes, computers and history.” This particular post can be found here. 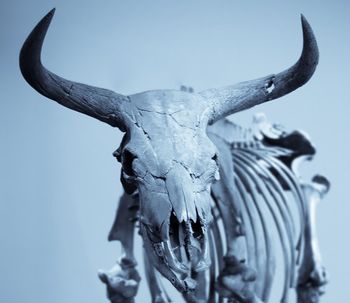 Animals were wilder then. Horns were longer, temperaments fiercer. These wild things had forever been free when humans took control of their flocks and herds, 10.000 years ago. Through careful breeding and rearing, the first pastoralists of the Near East moulded the beasts into more docile versions of their former selves. Over time, Bezoar became goat and auroch became cow. But it wasn’t just the beasts that changed. Somewhere deep inside their lungs, invisible to the human eye, a wild bacterium became livestock disease.

A severe Mycoplasma infection begins with a cough, followed by a groan, a grunt and more coughing. Breathing becomes difficult and painful. Eventually, the cow or goat becomes listless and, in the terminal stage of disease, stops moving altogether. It just stands there, oozing mucus and saliva from its nose and mouth, until it dies. Untreated, the most deadly of Mycoplasma strains can slaughter herds within days.

Mycoplasma mycoides travels in the droplets that are released with every cough and breath. A goat or cow has to be to be in direct contact with the droplets from a diseased animal in order to contract the disease. This is not as rare of a occurrence as it sounds. All it takes to infect an entire herd is one infected animal in a tightly packed truck, stable or kraal. After a major outbreak amongst goats in South Africa, veterinary surgeon Duncan Hutcheon recalled the extraordinary speed at which the disease spread and animals died:

On 4 March 1881, the main flock began to show evidence of lung disease which spread rapidly. Some 700 goats died in the next 14 days. I was not sure at first that the disease could be contagious. I had no knowledge of any disease which could cause the death of so many goats so quickly.

The nineteenth century Hutcheon lived in was a golden age, as far as Mycoplasma mycoides was concerned. The livestock trade became global, while vaccination programmes were still in their infancy. Entire countries could be infected by a single animal. 50 years before Hutcheon described the outbreak amongst goats, a handful of cows in his country became infected by a Friesian bull, imported from the Netherlands. The disease soon swept through South Africa, killing 100,000 cows and oxen along the way. 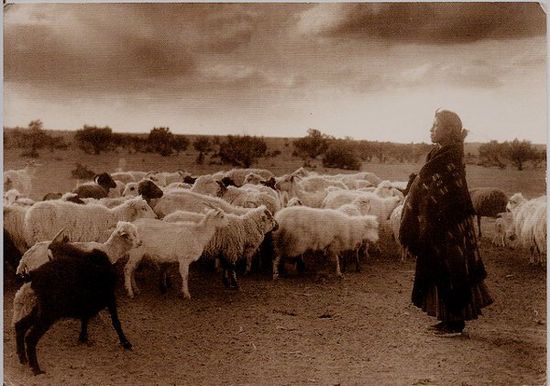 A young Navajo woman tending to her sheep and goats. (Scanned by koiart71)

Over the past few years, scientists have realized that the Mycoplasma mycoides family extends beyond its two most infamous members, but have so far failed to chart all the relationships between the different strains. To figure out who is related to whom, Anne Fischer and her colleagues collected 118 different strains from all over the world, and sequenced 7 of their genes. The collection features bacteria from all times and places, including strains isolated from African cattle in 1931, Rocky Mountain goats and Mouflons from Qatar.

Using the genetic differences between strains as a measure for their kinship, Fischer’s team reconstructed the entire Mycoplasma mycoides family tree. From this tree, the team concludes that the founding father of all Mycoplasma mycoides lived 10,000 years ago – around the same time pastoralists domesticated cattle, goats and sheep in the Near East. It’s easy to see how a lung disease would thrive better in a dense, human-controlled herd, compared to a wild one. Animals are brought together in kraals, stables and around watering troughs, and if the herd is mixed, they are exposed to bacteria and viruses they haven’t encountered before.

No bacterial family is born out of thin air, not even a lung disease like Mycoplasma mycoides, so who where its ancestors? Was it indeed a wild bacterium, lurking in the lungs of the first wild beasts herded by man, as I suggested in the introduction? Fischer and her colleagues might have found a clue that points in this direction. In their extensive collection of bacteria, they identified an unknown relative of the Mycoplasma cluster in several wild goats. This new species was isolated from Alpine ibexes in zoos and from a wild Rocky Mountain goat. The researchers are already sequencing its genome and characterizing its biochemical traits, to see what secrets about Mycoplasma mycoides‘ ancestry it holds. 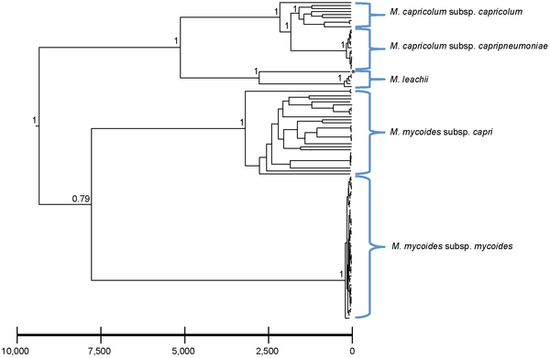 The family tree of the Mycoplasma mycoides cluster. Horizontal axis represents time, in years. The entire cluster is 10,000 years old, but the two most virulent strains (M. capricolum subsp capripneumoniae and M. mycoides subsp mycoides) are much younger. Source.

Mycoplasma leachii, a member of the Mycoplasma family that causes inflammation in the joints and udders of cows rather than pneumonia, has another interesting story to tell. Most strains formed distinct genetic populations. Not Mycoplasma leachii. The researchers discovered that this bug is of hybrid origin. Almost a third of its genes come from Mycoplasma that cause contagious pneumonia in cows, whereas the remaining two-thirds are from goat-specific strains. Since no Mycoplasma can survive without a host, the hybridization must have taken place within a single animal. Animals in mixed herds run the most risk of becoming infected by multiple strains. They are what the authors call “hybridization ovens”, baking new Mycoplasma mycoides variants in their co-infected bodies.

While Mycoplasma mycoides as a family might be as ancient as livestock itself, the two most contagious and deadly strains are much younger. The common ancestors of the strains that cause contagious pneumonia in cows and goats lived between 91 and 414 and between 56 and 490 years ago, respectively. I’m surprised that the authors make little note of this in their paper and wonder what could have favoured the origin and survival of these hypervirulent bugs in recent centuries. Herding made Mycoplasma mycoides—but what turned it into a killer?