Editor’s Note: This is the second in what is expected to be an ongoing series about cells that might not come immediately to mind when you think “microbe.” The first is linked here Oddly Microbial: Ribocytes. Comments and suggestions are encouraged.

“Cancer cells are ancient alternative organisms, living protozoan-like fossils, foreign to their hosts because of deep origins elsewhere,” says oncologist Mark D. Vincent from the University of Western Ontario in Canada. They are, he asserts “In the body but no longer of the body,” and therefore deserve a radically different taxonomy. This isn’t a new idea but one taking on increasing relevance with the dismal failures of one onco-therapy after the other. 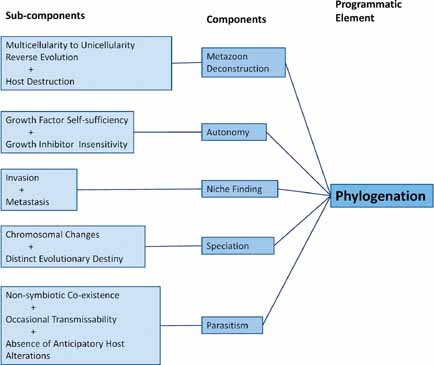 Cancer is not simply a “disease,” Vincent argues, “It’s a competitive struggle between a battle-scarred ‘protozoan’ from the Pre-Cambrian era and its ‘normal’ metazoan phenotype.” The cancer cell resembles a type of opisthokont, our uniciliated eukaryotic ancestors which are closely related to choanozoa and fungi. Moreover, despite the need for cancer cells to inhabit metazoa, malignancy isn’t integral to multicellularity. Indeed, for cancer cells to succeed they have to forsake membership in their host. This entails the usual microbial tactics of immune evasion, nutrient competition, autophagy enslavement, and, ultimately, tissue invasion. “Paradoxically, the more resilient the cancer, the more likely it is to self-destruct by killing its host,” says Vincent.

However, carcinogenesis can promote long-term survival if vast numbers of cancer cells escape the dying metazoan into a moist environment and either achieve a free-living future or parasitize another host, Vincent explains. The best known examples of the latter are infectious malignancies such as canine transmissible venereal tumor (CTVT) and the deadly facial cancer that afflicts the Tasmanian Devil. “These cancers are able to evade the mortality of both their original and their new temporary hosts in exactly the same manner as an extrinsic infectious microorganism,” he adds but emphasizes that interpersonal transmission of cancer cells is rare and the evolutionary “deep origin” theory involves “a much more sinister concept of encrypted cancer cells in modern genomes.”

That cancer cells can survive as free-living cells is speculative, but Vincent notes that they grow extremely well in fluid-filled body cavities (ascites, pleural effusions, cerebrospinal fluid and the like). Thus, carcinogenesis could represent a vestigial aquatic behavior that is still successful for unicellular eukaryotes and simple metazoa. 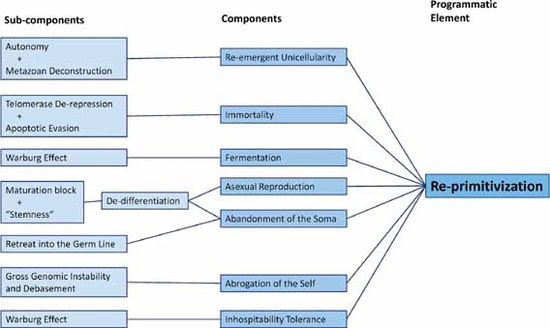 “If an enterprising early cell ‘judged’ its metazoan was doing poorly, oncogenic reversion and host sacrifice could provide an escape from imminent death,” according to Vincent. This strategy is not unknown in nature; for example, even little bits of genes called superantigen pathogenicity islands, or SaPIs, routinely escape their doomed phage-infected bacterial hosts in search of cells with brighter futures.

Successful life forms—everything still around today—had to have an evolutionary “Plan B” and Vincent considers cancer cells Plan B: proto-organisms encrypted in every eukaryotic cell in every multicellular animal retained to deal with periods of extreme challenge. The sole purpose of this latent life form, according to Vincent, was “to invent its way to the future” during early Earth’s episodes of pre-ozone, extraterrestrial irradiation; food chain collapse and nutrient deprivation; inter-species chemical competition; a deluge of reactive oxygen species (ROS) and unpredictable climate extremes. Thus, “The universal traits exhibited by cancer cells represent the re-emergence of an ancient survival program,” he says. These traits include immortality, genomic instability, unicellularity, asexuality, maturation blockage, and fermentation.

However, the resilience necessary to sustain life on early Earth has a “dark side” for modern-day metazoans, Vincent says, pointing to “the survivability of the cancer lineage and its profound defense capabilities against a range of extreme therapeutic toxins and radiation. “Moreover, the environments within which cancer cells flourish, those with intolerably low oxygen and pH, resemble the Pre-Cambrian dooming to failure therapies that closely resemble the same challenges cancer cells evolved to defeat, i.e. radiation, antimetabolites, and anti-tumor antibiotics. 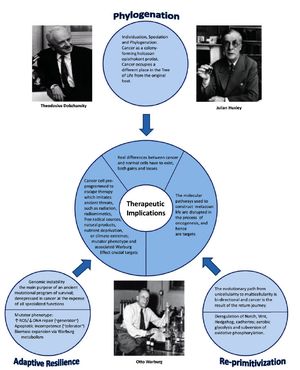 To view a larger version, click the image. Source.

Recognizing cancer as a species separate from the metazoan host rather than just a series of random cellular mistakes is cause for optimism because it guarantees distinct molecular targets for rational drug design. Like other microbes, for example, cancer cells grow in colonies; cooperation and competition require communication. Thus, targeted quorum-sensing antagonists might be designed and deployed to break up tumors, which are akin to biofilms. It’s also possible that the strategies developed to defeat cancer-cell proliferation could be extended to other yet unconquered protozoan parasites as, for example, Plasmodium falciparum, the deadliest cause of malaria.

Perhaps there is even a cancer “off switch,” Vincent says and suggests that we devote more resources to looking for it.

“Vincent’s thesis that cancer is our evolutionary heritage is a fascinating complement to the distillations of Douglas Hanahan and Robert A. Weinberg, which imply that cancer is driven into a state of unrestrained growth by forward evolution,” comments Garry P. Nolan at Stanford University. “At the core of every cell’s regulatory apparatus is the ‘will to live,’ a restrained program waiting to be let loose once the social contract with the metazoan is broken—a primordial program waiting to be unleashed. Not only do mutations drive cancer forward, they simultaneously set free an embedded survival program,” says Nolan. “This idea has an engaging symmetry and although difficult to prove from an evolutionary perspective, prototypical examples might be found in more primitive metazoans,” he adds.

Marcia Stone is a science writer based in New York City and a frequent contributor to ASM’s Microbe magazine.

Thanks to all you for posting comments, and especially to Marcy and Garry Nolan for taking it seriously.

There are parts of this whole thesis about which I feel more confident, and parts that I am less sure of. It is difficult, for instance, to see what long-term advantage there is to metazoa to have their constituent cells go rogue, and destroy the metazoan body in the process; how can this trait be passed on to offspring to give them a leg up over the competition, unless the parents themselves are the competition. And as one goes a little way up the eukaryotic tree, it is increasingly unlikely that the entire metazoan itself can be re-constituted from one rogue breakaway cell. It is possible, however, that in simple metazoa this strategy might have been advantageous under conditions of stress, as an alternative to encystment, say. Perhaps just breaking away in the water and going it alone might not necessarily have entailed eating the rest of the organism, although this kind of macro-autophagy ("cancer cachexia", or microbial cannibalism) could be a survival strategy under conditions of nutritional deprivation, or other environmental stress.

There are many conditions which might signal to the cell that the whole organism was in trouble; food shortage is surely one of them; injury is another; chemical toxicity,including attack from other species; thermal stress, pH, salinity etc; every environmental parameter has its limits as to what can be tolerated and metazoan cells talk to each other constantly.

"But cancer as cellular growth with the brake lines cut...": this is not excluded by what I am saying, but cancer is so much more than that. The whole nature of the beast changes very fundamentally; it's not just normal cells piling up. They are different chromosomally,they have a very different energy economy, they cannot die properly, they skillfully exploit the host and they truly resemble microbes in so many ways (see the diagrams). Since all cancer cells end up almost the same as each other, it is much more likely that what we have is an ancient program de-repressed as a result of the cutting of the brakelines (eg by mutagens), and not a new invention every time, that just happens to end up the same.

I think the cell is a "kluge"; it has to build on top of what came before, and what came before metazoa were microbes. Protists, if you like. When the brakes are cut, this is what sits up and grunts.

I don't think we know what the long term prospects were for single cells in a primitive aquatic environment. Single cells have a number of advantages over multicellular animals: motility, for one, and another, they are more difficult to catch and eat. Furthermore, they can mutate more without threatening the integrity of the whole organism. And they can probably survive on less food, and also survive dessication by encystment easier than a larger animal.

I agree this is all difficult to prove or disprove; however, we do know it is possible to culture enormous quantities of transformed cells in aquatic environments, eg hybridomas, to commercially make antibodies, so I don't see anything inherently impossible about it.

Thanks again to all