An Evolutionary Tale of Zombie Ants and Fungal Villains & Knights 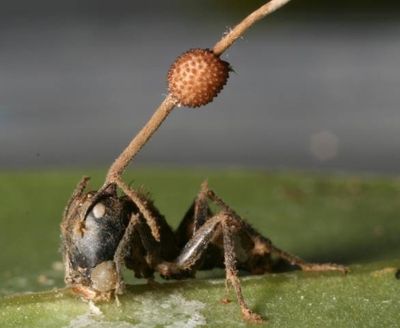 Fig. 1: An ant infected by O. unilateralis bites the underside of a leaf. The fungal stroma emerges from the back of the ant’s head and develops a fruiting body with a capsule full of spores. Once matured, the capsule is released and the spores disperse on the forest floor. Courtesy of David P. Hughes. Source.

In a recent post I shared with you some amazing things I had learnt about coprophilous (‘dung-loving’) fungi that spit their spores like pros. What I did not tell you then is that my six-year-old son also fell in love with the spitting fungi (dung + spit = child’s interest!) and wanted to learn more. So we spent hours watching online videos until we stumbled upon a BBC’s Planet Earth video narrated by the great David Attenborough about ant parasitic fungi in the genus Cordyceps. The video shows a carpenter ant (genus Camponotus) that has been infected by spores of the fungus Ophiocordyceps unilateralis. The spores germinate inside the ant’s respiratory track and the mycelia grow towards the brain while feeding on soft tissues. Once the fungus reaches the brain, it induces behavioral changes such that the ant climbs up vegetation and bites the underside of the leaves. There the ant awaits its death while the fungus continues to grow within. The stroma stalk of the fungus eventually protrudes from the back of the ant’s head and a fruiting body bearing a capsule filled with spores forms near its tip (Fig. 1). Once the spores are sexually mature, the capsule is released, and then explodes, either in the air or upon hitting the ground. This delivers the spores into the path of healthy ants, there to start a new cycle of infection.

Right away, I searched the fungus name in the STC blog and found a beautiful post by Ilham Naili that describes the life cycle of this parasitic fungus in more detail. I also started my own search and learned that the fungal spores can attach to the ant’s body and secrete enzymes to penetrate through the cuticle. These are indeed some aggressive parasites capable of a generalized body invasion. In fact, some pictures of dead ants show the fruiting body protruding through their abdomen, rather than the back of the head. But spores also enter the ant though its respiratory spiracles (aka the exoskeleton openings that allow the air to enter the trachea). This appears to be the most efficient route because the spore can use the nutrients provided by non-essential soft tissues within the respiratory track to grow its mycelia in close proximity to the ant’s brain. There, bioactive compounds secreted by the mycelia enter the ant’s brain and effectively block pheromone reception. This disorients the ant andleaves it under complete fungal control. Like a zombie, the ant climbs up the trees and bites a vein on the underside of a leave with great force. Interestingly, the shape of the grip bite mark is very distinctive and is similar to marks identified in 48 million year old fossil leaves!!!!! This biting behavior effectively immobilizes the dying ant upside down under a leaf, but also lowers its head (Fig. 1). It appears as if, in doing so, the ant submissively bows to its destiny and exposes the soft tissue between the head and the trunk to facilitate the protrusion of the fungal stroma stalk.

Fig. 2: O. unilateralis growing on potato dextrose agar for 7 days secretes six type of naphthoquinones. The formulas are shown in (a) and the growth of the fungus on the agar in (b). After 12 days of incubation the naphthoquinone secretion is so copious that it forms droplets on the plate (c). Source.

Concerned as I was about prematurely destroying my son’s love for microbes, I set out to learn more about Cordyceps, avidly searching for that ‘positive something’ about them that could alleviate the bad memory of the brain-eating fungus. Cordyceps, I learned, is a fungal group (in addition to a genus) in the Ascomycota that comprises hundreds of species. All are endoparasitic; most parasitize arthropods, though a few infect other fungi. Amazingly, each fungus specializes in infecting a single type of host. While some can infect other hosts, reproductive success is often compromised. Not all affect the host’s behavior, but those that do are known to produce copious amounts of bioactive compounds. O. unilateralis, for example, secretes at least six types of secondary metabolites broadly known as naphthoquinones (Fig. 2). All six have antibacterial, anticancer, and antimalarial activity. Well, there goes something positive ...

The question that lingered in my mind was what mechanism, if any, could protect the ants from the deadly fungus. The ants build their nests in the above-ground vegetation. But the parasitic fungus controls the behavior of the infected ants and forces them to climb upwards so they die close to the colony’s nest. This maximizes the chances of infecting healthy individuals. Furthermore, dead ants are often found at high densities (approximately 26 per m2) in localized areas of the vegetation termed graveyards. This helps concentrate the released fungal spores in the ants’ path on the forest floor beneath. Healthy ants are known to actively avoid the zombie ant graveyards and only venture to the forest floor occasionally—strategies that prevent infection. This spatially limits their resources but, hey, giving up some food sources seems like a good evolutionary trade off to ensure the survival of the colony. 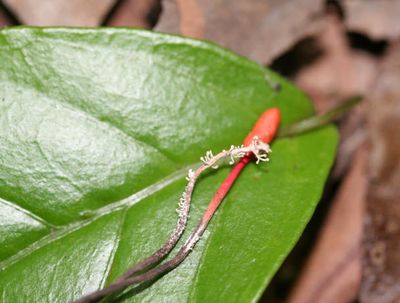 Fig. 3: A stroma of Ophiocordyceps nutans infected by Polycephalomyces sp. is shown on the left. As a comparison, a healthy, nonparasitized stroma with its red fruiting body is shown on the right. Credit Alisha Owensby. Source.

Just when I thought this was it for the defenseless ants, I stumbled upon a paper by David P. Hughes’s group published in PLoS One about a white fungus that comes to the ant’s rescue. Who is this mysterious knight? None other than a cousin of the Cordyceps! The fungal family Clavicipitaceae includes genera with sexual cycles such as the Cordyceps as well as asexual genera such as the Polycephalomyces. Cordyceps are often parasitized by Polycephalomyces spp. This makes the Polycephalomyces white knight a hyperparasite (aka a parasite of a parasite). Cordyceps are especially susceptible to infection during the stroma stage. Once the hyperparasite infects a stroma, it feeds from it and prevents the formation of its fruiting body (Fig. 3). More than half of the dead ants in the graveyards surveyed by the researchers were hyperparasitized. The brain-eating fungus has a slow maturation process, needing approximately 4 weeks to form the stroma and 4 more weeks to produce sexually mature fruiting bodies. This allows sufficient time for the white fungi to infect the Cordyceps stroma. As a result, the white fungi prevent the formation of a sexually mature fruiting body and ‘castrate’ the brain-eating fungus on the spot.

The lengthy maturation process of the brain-eating fungus also exposes the fungal structures to environmental insults for prolonged periods of time. In fact, as many as 13% of the fungal structures in the dead ants surveyed in the study were damaged. Furthermore, in 25% of the dead ants, the fungus had not completed the maturation of their fruiting bodies, possibly because of inadequate temperature and humidity. The combined action of the white fungus and environmental insults rendered most (93-94%) of the dead ants sterile and posing no risk of infection. To make things worse for the Cordyceps fungus, more than half of the remaining infective fruiting bodies suffered from some sort of ‘sexual dysfunction’ and could not shoot their spores when tested under laboratory conditions. Yet, once matured, the fruiting bodies were robust; they were immune to the white fungi and able to survive in the environment for prolonged periods of time. This capability for long-term survival compensates, at least partially, for the low dispersal potential and increases the reproductive success of the parasitic fungus.

In the end, the white knight, with a little help from the environment, ensures that only a few, but very robust, fruiting bodies are produced over time. This is enough to increase the size of the ant graveyards slowly, but steadily, so sexually mature spores can be produced at regular intervals for longer periods of time. The researchers compared this evolutionary trade-off to a phenomenon called iteroparity, a reproductive strategy in which an organism produces offspring in successive cycles, rather than in a single event, to ensure long-term survival. Every zombie ant that joins the graveyard is like a new ‘pregnancy’ for the fungal villain but also food and shelter for the white knight. This along with the ants’ preventive measures to avoid contact with infected individuals and areas of high spore concentration ensures a perfect balance between the survival of the ant colony and the parasitic and hyperparasitic fungi, so none goes extinct. And although the video of the brain-eating fungus should be rated PG-13 for the animal-loving audience, I can’t help but admire how beautifully nature intertwines the lives of animals and microbes to keep a harmonious balance. This is indeed a true tale of co-evolution, with zombies, villains, and white knights included. I just need to wait a few more years until I can help my son understand that this is, indeed, a story with a happy ending.

It seems there is a great possibility that the ant's behavioural change is due to some form consciousness; a realisation that they are marked for death, conscious that they are a detriment to their hive-mind psychology. That their behaviour is that of a conscious and dutiful action.. Science, prove me wrong... =]
I do wonder how Darwin would interpret and respond to these discoveries.