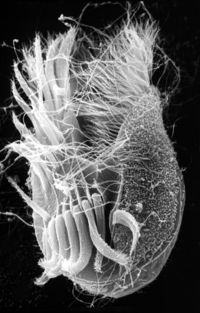 Merry notes: I first stumbled across STC when reading a book by Elio’s friend, Lynn Margulis, in which she mentioned the ectosymbionts of Euplotidium. Googling for that critter by name brought me to Elio’s 2007 post about this hand-
some ciliate.

I am sorry and sad that Merry will have to relinquish her partnership in this blog. She has been oxygen to me. Besides the fact, evident to readers of this blog, that she is a remarkably gifted writer, are less visible attributes. She has been an imaginative and creative editor, a critic of the scene, and a keeper of this blog’s moral compass. Beyond that, she is someone with whom I have discussed matters with trust and the knowledge that she will provide deep insights. I have seldom if ever had such a friend in science. I’ll try to soldier on, but it won't be the same.

Our story is indeed unusual. After an initial flurry of emails, starting about 5½ years ago, we somewhat timorously began a Skype (audio only!) exchange that at least served us to become acquainted with the timbre of one another’s voice. And so it has stood—we have not seen each other in person yet. For all our reliance on media, we have developed a unique working relationship, where we acted symbiotically, respected our foibles and relied on the other for important as well as simpler judgments. It goes beyond that. In a short span of time, Merry has become a seasoned microbiologist, especially when it comes to the viruses. Her understanding is stunning, her perspicacity, dizzying. I will miss her companionship.

I had no idea. Five-plus years ago I knocked on the virtual door of the blog and Elio invited me in. If I’d had a crystal ball that showed me what these five years would bring, I’d not have believed it. It is still hard to believe.

At first I timidly proofread Elio’s posts, then started tweaking the layout of the published articles. Soon we found that I could relieve him of some of the inevitable rewriting without distorting his message, and I even enjoyed doing this! After all, not only do I take pleasure in finding the right words, but I was getting an education in microbiology and in writing from one who knows both well. One of the most valued things he has taught me is how to find the story in a detailed research paper and then retell it in a digestible written form. I intend to express my appreciation for this gift in the very best way, that is by using what he has taught me as I continue to use written words to speak for The Small Things.

Another of Elio’s qualities was key to both my arrival at the blog and my enthusiastic participation. Some years before I discovered STC, I had read an essay by him in a microbiology textbook, one of perhaps twenty written by researchers in the field telling students something about what it is like to be a microbiologist. I remembered only his. Only he spoke with respect and appreciation for the microbes he studied. That attitude continues to infuse STC and sets it apart from the numerous other microbiology blogs.

Step by step, he encouraged me to participate in more aspects of the blog, authoring posts and then joining him in the masthead as co-blogger. Many other opportunities also came to me through his mentoring and sharing. I know he will miss me now, as I will miss him.

Also five years ago I had no idea that post-polio syndrome would ever take such a chunk out of my time and my energy, and surely not this soon. Back then I was still moving lava rocks by the ton, mixing concrete, and tending a large veggie garden that climbed up the mountainside. Today it is time for me to become STC’s first Blogger Emeritus. My work here will be completed at the end of August.

On the other hand, Elio is still going strong, and ASM is ever more committed to supporting STC. I know I will enjoy visiting STC for many years to come. Elio will never run out of fascinating microbial stories to share.

Merry
from her lava tube on the Big Island