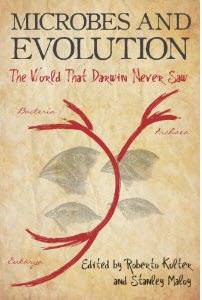 Maybe it’s the lava fields in the Galapagos, maybe it's the giant tortoises, but something caused a bunch of microbiological luminaries to come out of their shells and write a bit about what they think and feel regarding evolution. A meeting held in those islands in 2009—being Darwin’s 200th birthday—brought together some 40 people instructed to discuss microbes and evolution. Out of this came a thin and extraordinary volume, an anthology of lively essays that largely succeeded in laying bare the personal reflections of the participants. And they wrote in plain English. This is quite an unusual book in the history of scientific writing. Although many people have written notable personal accounts of how they relate to their science, rarely has there been such a successful convergent effort.

The book encompasses a large variety of topics related to the subject at hand. Relatively few chapters actually focus on evolution directly, but this probably reflects the relative newness and paucity of laboratory studies in evolutionary microbiology. In some cases, the connection seems to be a bit of a stretch, based perhaps on the Dobzanskyian dictum. By stating that Nothing in biology makes sense except in the light of evolution, Dobzansky forced all biologists to pay at least lip service to connections between their work and the Big E. This is not always an easy thing to do, and in some cases, the efforts in the book can be called intrepid. But even in the seemingly less-related chapters, the nexus is not perfunctory and Darwin’s presence is keenly felt. And the ideas are consistently presented in a readable, ever stimulating fashion. In the end,about half of the participants had something to say about Darwin; the other half, what Darwin would have said about them.

To give you the flavor of what's inside this book, here are a few bons mots, chosen almost at random.

Whether viewed from the bow of the Beagle or through the lens of the microscope, all life is bound by the same evolutionary rules. P. 41

Please don't tell my mother, but for years I’ve wanted to be Charles Darwin. P. 263

...we can expect natural environments to contain a lumpy continuum of microbial genotypes and phenotypes. P. 273

So most of the evolution on this planet is actually being carried out by entities Darwin never imagined and at a scale he never could have considered. P. 69

I found this a most satisfying book, laced with charm and sharp insights. Buy it, treasure it, and keep it for your grandchildren. It will wear well. And, at the price, this is a bargain you may never see again.

This really is a terrific book. The level of quality of all of the chapters is good and some are top drawer.