Fishing With Algae For Malaria Vaccines 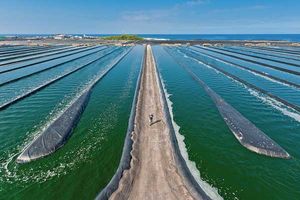 Malaria is a big killer and a major worldwide health concern. The number of malaria-related deaths has fallen to approximately 650,000 in 2010, from well over 1 million just ten years ago, thanks to the World Health Organization (WHO) and to philanthropic organizations, including the Bill and Melinda Gates Foundation. This effort, composed of drug-based treatment and insecticide-treated bed nets (ITNs), was nothing short of heroic, but unfortunately it is not sustainable. Malaria strains have been resistant to chloroquinones for decades and the emergence of artemisinin resistant strains is threatening the last effective drugs in our arsenal click here and here. The story is similar for insecticides. Countries with insecticide-resistant mosquitos far outnumber those without. For instance, mosquitos in Cote D’Ivoire are resistant to four classes of insecticides, those in India, to three. In response, the Malaria Vaccine Initiative was established in 1999 by a grant from the Bill and Melinda Gates foundation to accelerate the development of effective malaria vaccines. Vaccines are the single most cost effective means of disease prevention, but, for malaria, coming up with one has not been easy. The most deadly form of human malaria is caused by the protist, Plasmodium falciparum, which has about 5300 genes and three distinct developmental stages each housed in a different environment—liver, blood, and mosquito (Fig. 1). P. falciparum spends the majority of its time hidden in liver cells and red blood cells. Here it is sequestered from the antigen-presenting cells that would trigger an adaptive immune response. Furthermore, P. falciparum is a moving target; its cell surface proteins are highly polymorphic, likely a response to the selective pressure imposed by the immune system. It seems that in this arms race the parasite is winning, but there is hope.

Recombinant protein-based vaccines, otherwise known as subunit vaccines, may be able to tip the balance in our favor. During phase III clinical trials, a pre-erythrocytic vaccine based on surface proteins from the sporozoite (called RTS,S) provided 30-50% protection over a 14 month period. While promising, better performance is needed to move towards eradication. GlaxoSmithKline has promised to sell RTS,S on the slimmest of margins, but even so the price of such a vaccine is of serious concern given the number and socioeconomic status of people in malaria endemic regions. Recombinant proteins can be expensive to produce because they must be purified from the expression system (in the case of RTS,S, from yeast). Formulation with adjuvants as well as issues with cold storage and injection delivery also add to the cost and complicate the logistics of widespread vaccination.

Another yeast-made subunit vaccine had made it to clinical trials in 2008 via a different strategy. This vaccine targeted Plasmodium surface protein 25 (Pfs25). Discovered by David Kaslow, now director of the Malaria Vaccine Initiative, Pfs25 is essential for the sexual development of P. falciparum within the mosquito. The idea was that antibodies to this protein would be present in a vaccinated individual and would be taken up by the mosquito during a blood meal. These antibodies would then protect the mosquito from infection, thus preventing subsequent transmission to a human host. This so-called transmission blocking vaccine is feasible because human malaria has no significant animal reservoir and, unlike the plasmodial surface proteins made the liver and blood stages, this family of proteins is well-conserved. Keep in mind that blocking malarial transmission by eliminating the mosquito vector using DDT was crucial to the success of the eradication strategies in the United States and elsewhere.

Unfortunately, Phase I trials of the Pfs25 vaccine were stopped due to an allergic reaction. The choice of yeast for Pfs25 production may be partly to blame. However, no suitable alternatives were available at the time and purifying it from sexual stage P. falciparum parasites is not feasible. Pfs25 and other members of this family are not glycosylated, which is an important distinction because glycosylated Pfs25 alone does not elicit transmission blocking antibodies. The gene encoding the Pfs25 subunit vaccine used in yeast contained two mutations to prevent N-linked glycosylation at two sites, but yeast is notorious for hyperglycosylating recombinant proteins.

Bacterial production was unsuccessful, most likely because Pfs25 has a complex tertiary structure that contains tandem repeats of epidermal growth factor (EGF)-like motifs. EGF motifs contain multiple disulfide bonds, but the cytosolic reduction potential in bacteria inhibits cysteine-cysteine bonds. This deficiency is often overcome by shuttling proteins to the periplasm, but E. coli-produced Pfs25 did not elicit transmission blocking antibodies. Thus, the structure was not sufficiently similar to native Pfs25. 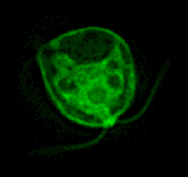 Production of Pfs25 presented a rare opportunity for the algae community to get involved because of the unique biology of the algal chloroplasts. Chloroplasts are prokaryotic in nature, descendants of a cyanobacterium that was long ago engulfed by a eukaryotic cell and subsequently lost most of its genes. Unlike their prokaryotic distant relatives, such as E. coli, chloroplasts can form disulfide bonds, do not glycosylate proteins, and contain eukaryotic chaperones. Furthermore, algal production is highly scalable and economical when grown in outdoor ponds. An entire industry is being born on the premise that algae-based gasoline can supplant the finite oil reserves, themselves the result of millions of years’ worth of fossilized algae. Eighty-seven million barrels of oil are consumed daily on this planet—that’s a lot of algae.

I have been involved in this algal work, and here is a brief account of what we have achieved. We engineered the freshwater alga, Chlamydomonas reinhardtii, to produce Pfs25. Its chloroplast can be transformed via particle bombardment provided the DNA-coated gold particles are shot into the algae at velocities high enough to penetrate the cell wall, the outer cell membrane, and the double layered chloroplast membrane. Once the DNA-gold complex enters the chloroplast, the aqueous environment solubilizes the DNA, thereby releasing it from the gold. The DNA then integrates into the chloroplast genome by homologous recombination. Much like bacterial plasmids, there are multiple copies of the chloroplast genome. Several rounds of selection promotes recombination between the multiple copies of the genome in the single chloroplast until eventually all of them contain the transgene. 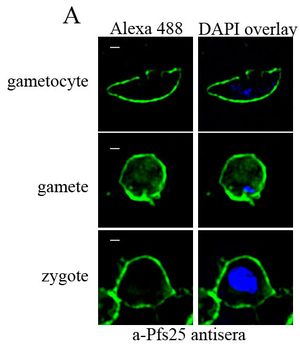 The structure of algae-produced Pfs25 seems to resemble the native protein. Immunofluorescence experiments using antibodies to algae-produced Pfs25 are consistent with the known localization of Pfs25 (Fig. 2A) Pfs25 is an abundant extracellular protein that is embedded in the outer membrane of sexual stage parasites. Consistent with this, antibodies to algae-produced Pfs25 appear to selectively bind to gamete, gametocyte, and zygote membranes. These data suggest that C. reinhardtii may be a suitable organism for making Pfs proteins. Most gratifying is that these antibodies block malaria transmission (Fig. 2B). This can be measured in the laboratory using a standard membrane feeding assay (SMFA). In this experiment, human blood, in vitro cultured P. falciparum gametocytes, and the mouse antibodies to algae-produced Pfs25 are mixed together in a small apparatus that allows mosquitos to feed through a membrane. This experiment simulates a mosquito feeding on a person. The mosquitos are dissected nine days later to look for the parasite. Seeing no parasites indicates transmission blocking activity. 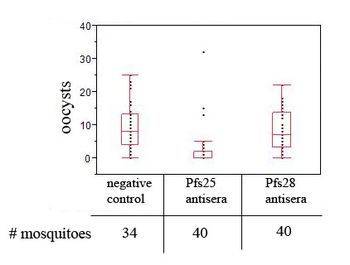 The activity of antibodies raised to algae-produced Pfs25 will have to be compared with other candidates. Recombinant Pfs25 made in tobacco also elicited transmission blocking antibodies, and so did a viral vector vaccination strategy. However, algae remain the only system that does not require mutational alteration of the protein to avoid glycosylation, and it is likely the system best suited for large-scale, inexpensive production.

However, these are all conventional vaccines that require a nurse and a needle for administration.  How about an oral vaccine? Malaria-endemic countries tend to be poor and to have underdeveloped health infrastructures, thus lack the resources to implement dissemination of an injectable vaccine. For these countries, heat-stable, orally-delivered vaccines may be the answer. Algae and many other plants are deemed safe for consumption by the Food and Drug Administration. Oral vaccines made in tobacco and potatoes in 1995 have largely been an unrealized dream (except for polio, but that’s a different story). Indeed, there are no commercially available oral subunit vaccines. Research labs are continuing to look for answers. Nearly 300 papers related to oral vaccines have been published just this year (NCBI). Many of these studies utilize antigens that are fused to or co-administered with toxins from pathogenic bacteria, which appear to modulate the gut immune system and act as mucosal adjuvants. So it seems even the ‘bad’ bacteria are good sometimes. I have only recently begun embarking in a career towards making vaccines based on modern technology. I am hopeful that efforts by myself and others will bring results that will help a lot of people in need.

Jamie is a postdoc in the Mayfield lab, San Diego Center for Algae Biotechnology at the University of California, San Diego.