Figure 1. a, b, Early after the pathogenic bacterium S. typhimurium invades host cells (a), it resides in a cytoplasmic vesicle known as a Salmonella- containing vacuole (SCV; b). c, The bacterium can damage the vacuole membrane, exposing host sugar molecules to the cytoplasm. Thurston et al. report that the host protein galectin 8 binds to these sugars and triggers autophagy, by which the invading bacteria are destroyed. Specifically, the authors found that galectin 8 recruits another protein, NDP52, by direct interaction. NDP52, in turn, binds to the protein LC3 and recruits other components of the autophagy machinery to the damaged SCV. d, Eventually, the bacterium is enclosed in a specialized vesicle known as an auto- phagosome, which forms from the isolation membrane. e, Other vesicles (lysosomes) con- taining digestive enzymes can then fuse with the autophagosome, forming the autolysosome within which the pathogen is destroyed. f, The authors found that osmotic damage to cytoplasmic vesicles, in the absence of bacteria, also exposes host sugars that recruit galectin 8. Source.

Bacterial pathogens that invade a host cell either destroy it or persist within it. One of the most important defense mechanisms that mammalian cells have developed against such bacteria is the process of autophagy or “self-eating.” This is a widely studied system that cells use to degrade some of their own components as well as foreign invaders such as bacteria and viruses. So important is this process that it merits its own journal! And simple it isn’t.

A bacterial pathogen traveling through the mammalian cytosol is eventually detained within a double membrane structure, the autophagosome. How they get there varies for different bacteria. For instance, Salmonella enterica serovar typhimurium (S. typhimurium for short), a facultative intracellular pathogen, arrives within a phagosome, which is now termed the salmonella containing vesicle (SCV). It escapes from the SCV using its type III secretion system, and enters the host cytosol where, like other undesirable elements, it becomes coated with ubiquitin. This labels the bacteria as “cargo” for autophagy. When an autophagy receptor, optineurin, becomes phosphorylated it promotes selective autophagy of the ubiquitin-coated salmonella. Another mechanism for destruction of bacteria via autophagy employs proteins that directly bind to an adaptor protein coupled to the autophagosomal membrane, That should be the end of the would-be invaders. But, as we’ll see below, there is a third way to kill invading pathogens.

During autophagy, the first step is the formation of an autophagosome that contains the pathogen to be destroyed. This vesicle fuses with a lysosome whose enzymes work on degrading the pathogen within. In the paper at hand, the authors tried to figure out how autophagy combats S. typhimurium infection in HeLa cells. What they found is a novel ubiquitin-independent pathway.

The authors turned their attention to galectins, which are evolutionarily conserved lectins that bind beta-galactosides and other glycoproteins to monitor the integrity of cellular vesicles. One of the galectins, galectin 8, colocalizes with salmonella (see figure) and participates in its demise. This was an unexpectedfinding because the glycans targeted by galectin 8 are located inside host vesicles, such as the SCV. How do these lectins find their target? What happens is that the SCV is damaged by the salmonellae, which exposes host glycans, to galectin 8. This in turn recruits NDP52 and LC3—and autophagosome formation is underway. The authors concluded that galectin 8 specifically targets damaged intracellular vesicles and thus serves as a novel ‘danger receptor’ that recognizes vesicles that have been injured by intracellular bacterial pathogens.

This is an exciting discovery, identifying a novel piece of the defense mechanisms that mammalian cells deploy in response to invasion by bacterial pathogens. Apparently, galectin 8 evolved to assist in the clearance of bacterial pathogens from the cytosol. This action is not limited to S. typhimurium but works with Listeria and Shigella, as well as on vesicles damaged by other means, e.g. hypertonic shock. By detecting damaged vesicular compartments, this versatile protein targets pathogens and shuttles them into the autophagic pathway for destruction. Finding new host defense mechanisms such as this one in the autophagic pathway provides us with some novel strategies that might be useful in developing innovative therapies against infectious disease. 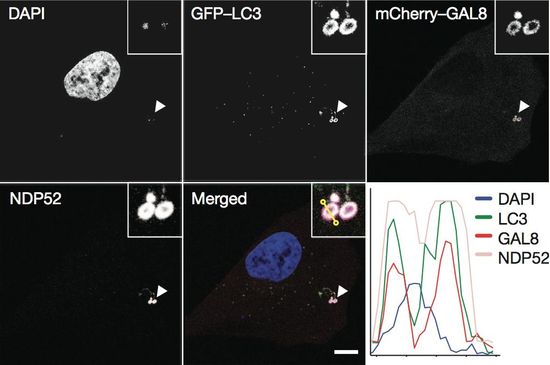 Figure 3. Galectin 8 co-localizes with LC3 and NDP52 to activate autophagy. Confocal micrograph of HeLa cells expressing GFP–LC3 and mCherry–galectin-8, stained for NDP52 1 h after infection with S. typhimurium. The lower right panel contains a fluorescence line scan along the yellow line in the merge inset. Arrowheads indicate the bacteria shown in insets. Source.

Andy is a student in the University of California at San Diego/San Diego State University Integrative Microbiology graduate course.