Editor’s Note: This is the third in what is expected to be an ongoing series about cells that might not come immediately to mind when you think “microbe.” The first two were Oddly Microbial: Ribocytes and Oddly Microbial: Cancer Cells. Comments and suggestions are encouraged. 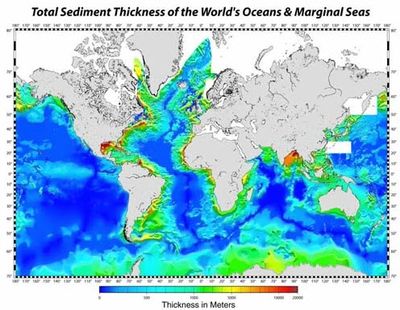 Life in a high-pressured environment with practically nothing to eat might be ok for high-fashion models, but it’s an unlikely lifestyle choice for a single cell whose usual overriding goal is to become two cells. Yet the largest living ecosystem on Earth—the deep biosphere—is comprised of microbes so energy starved that the average cell divides only once every thousand or even several thousand years.

Even what these cells are is unclear because they are so different, so distantly related to any of our usual microbial strains, they can’t be typed. Moreover, there isn’t an expert consensus about whether cells in the deep seabed are really “alive” and metabolically active, dormant, or, perhaps, even dead, according to Bo Barker Jørgensen, Director of the Center for Geomicrobiology at Denmark’s Aarhus University. 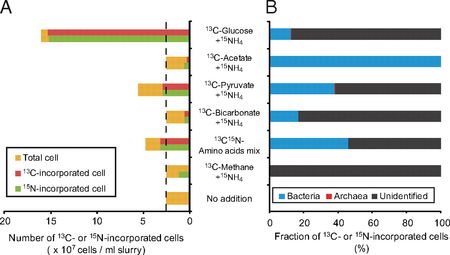 However, research by Morono et al. in 2011 provides convincing evidence that most of the deeply buried cells are indeed alive, says Jørgensen. When a banquet of isotope-labeled glucose or amino acids was put before them, 76% assimilated the rare delicacies and did so up to 1,000 times faster than is typical for deep seabed microbes. Thus, Jørgensen also reasons that, because they wake up so quickly when dinner is served, dormancy is probably not a good explanation for how most of these organisms survive the harsh conditions under the ocean floor.

Most of the oldest deep-sea cells so far studied are still dining on the remains of fish, algae, and the like that sank out of the paleo-ocean in the distant geological era of the dinosaurs, got buried deep down in the seabed, and have been slowly degrading ever since. What self-respecting microbe wouldn’t wake up quickly for a meal of fresh glucose or amino acids when its usual meager fare consists of rotting million year-old organic material?In 2009 Jørgensen’s group joined 30 fellow scientists on the R/V Knorr voyage to collect sediment cores up to 28 meters deep in the North Pacific Gyre. Subtropical gyres are the most oligotrophic regions of the ocean; “they’re like a huge closed pot” and don’t exchange much water with the rest of the ocean, explains study leader Hans Røy, also from Aarhus University. The trip was designed to investigate just how little it takes to sustain life.

Oxygen, much of which is made by photosynthesizing cyanobacteria in the ocean above, penetrates tens of meters into the seabed below the gyres. By calculating the amount of oxygen in the topmost sediment layer at the water interface and then measuring the amount missing from various levels below the team could tell how much its microbial community was consuming. Not surprisingly, the microbes in the deepest seabed, the 86 million year-old sediment, were using up the least amount of oxygen and must, therefore, have the fewest actively metabolizing cells. Thus it’s not a stretch to conclude that these microbes are living at subsistence levels and it further follows that community size in general is determined by the total energy flux.

These researchers consider that the microbes in each layer were trapped there at the time of sediment formation; thus the community members at the deepest levels are about 86 million years old. Because prokaryotes don’t agein the usual sense,“there are no biological constraints violated by the enigmatic longevity of microbes in the deep biosphere,” says Jørgensen. Furthermore, because of the absence of predators and a near-zero population mortality, the cells need not multiply very much to maintain a steady-state community size. Even virus attack is probably an insignificant threat to a sparse group of cells packed in fine porous clay.

The microbes identified in the deep seabed studies done to date appear to include both bacteria and archaea; however, Jørgensen argues that more archaea probably haven’t been identified because of their largely uncharacterized phylogenetic diversity in deep subsea floor sediments in conjunction with some as yet unresolved limitations when looking for potentially novel 16S RNA genes. While bacteria are the predominant prokaryotic domain on the Earth’s surface, archaea seem to rule the subsurface and have a selective advantage in that their cell membrane is much less permeable to passive diffusion of protons or other ions, he points out, adding that further research is needed.

Why should we worry about odd little microbes hidden deep below the world’s oceans? For starters, they play a crucial role in the global carbon cycle. Seventy percent of our planet is covered by oceans and the cells in the sea beds below them convert the carbon in decaying organic matter to CO2. They may do this very slowly “but if we add it all up, the metabolism down there plays a crucial role in the global carbon cycle,” says microbiologist and R/V Knorr team member Bente Lomestein at Aarhus University.

Marcia Stone is a science writer based in New York City and a frequent contributor to ASM’s Microbe magazine.