Ehux: The Little Eukaryote with a Big History

Coccolithovirus, a giant double-stranded DNA virus, infects Ehux. The virus (pink) was first observed in 1999 by W.H. Wilson and was found to be a “giant-virus” having 472 protein-coding genes. Source.

There is an organism out there that is smaller than you, older than you, and that has a house that’s probably fancier than yours. Meet Emiliania huxleyi, or Ehux. Ehux is a miniscule coccolithophore, a beautiful single-celled alga that doesn’t get enough attention in the world of microbiology. The tendency of biologists to ignore this phytoplankton species belies its significance. In fact, Ehux has a penchant for being flashy—it has phenomenally beautiful plates covering it, known as coccoliths, intricate composites of calcium carbonate that when viewed under the microscope rival the most wondrous sculptures made by man. And they exist in huge quantities. The White Cliffs of Dover wouldn’t be so large, or for that matter, white, if it weren’t for this tiny architect. Ehux makes blooms near the surface of the oceans that are so big they can be seen from space! And it has its own web page. 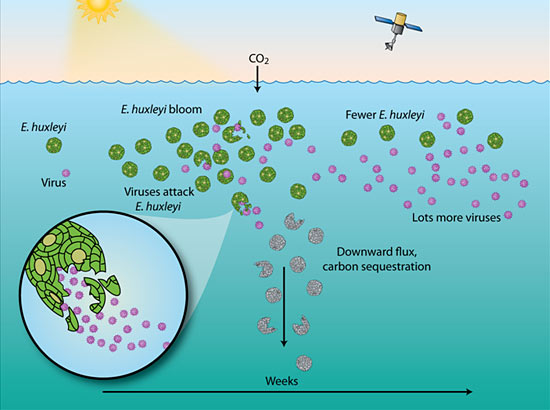 These blooms can have quite an ecological impact. With the sudden explosion of Ehux populations, the sulfur cycle can be affected dramatically, as these coccolithophores produce dimethylsulfonioproprionate (DMSP), which turns into the volatile, cloud-inducing, dimethyl sulfide (DMS). Likewise, the sheer density of this phytoplankton tends to physically block sunlight and cause darkening below. Both of these conditions, along with an upsurge in calcium carbonate falling to the sediment when Ehux blooms collapse, can significantly affect the marine ecosystem. The cause of such collapses is infection by viruses.

A recent paper by Martinez et al. probed further into how viruses cause Ehux blooms to crash. Bloom communities of both the phytoplankton and the viruses are dynamic; the researchers found that as part of the active interactions between the host and viruses, the presence of different viruses and timing of their influx can heavily influence the bloom of Ehux. Multiple genetic signatures of both Ehux and the viruses were found, revealing that both organisms change across the landscape over time, racing against each other for survival. Frada and colleagues looked into the methods used by Ehux to avoid viral annihilation, finding that the organism can switch from a diploid to a virus-resistant haploid stage, becoming invisible to viruses in the process. They called this a “Cheshire Cat” strategy. (See also a previous post on this subject.)

Viruses are not new to Ehux. Rather, it appears that they have played a substantial role in the coccolithophore’s history for at least the past 7000 years. Coolen used genetic signatures to reconstruct the history of Ehux and the DNA viruses that infect it, specifically Coccolithovirus.

Coccolithophore skeletons in sea floor sediments contain residual DNA from both the host and the viruses that can persist for thousands of years. The genetic techniques used in this study added to existing morphological and chemical information on Ehux communities and provided direct evidence on fluctuations in coccolithophore population structure. Genotypic variation correlated with large environmental changes, including those caused by changes in water salinity. The size of the DNA amplified by PCR was limited by the degradation of DNA fragments over time; however, viral DNA recovered from samples dating from 7300 years ago showed remarkable similarity to that of modern Coccolithovirus. This virus is a member of the Phycodnaviridae, which are part of theNucleo-Cytoplasmic Large DNA Viruses (NCLDV), a group that includes the giant Mimivirus and its relatives. The Coccolithovirus has a complex evolutionary history. Gene sequencing has shown that in infection, parts of its genome are transcribed in the host cytoplasm, unlike other viruses in the group that are transcribed in the nucleus. It is probable that some of these unusual genes were donated by an unknown organism following the evolutionary divergence of this viral species from the rest of the group. 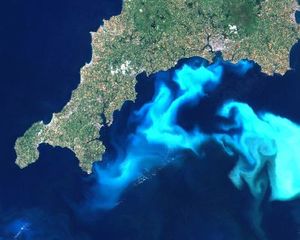 Potentially impacting the fields of virology, environmental science, and many in between, E. huxleyi is a worthy subject of study for micro- and macrobiologists alike. With recent publications linking it to viral ecology, pharmacology, and even optoelectronics, it seems that anyone with curiosity towards strange, single-celled eukaryotes would enjoy taking a poke or two at Ehux. The environmental impact of Ehux practically begs for a global warming study, and I’d bet a researcher currently studying biofuel-producing algae could find inspiration in the long-chain lipids produced by this coccolithophore.

Jaime is a student in the University of California at San Diego/San Diego State University Integrative Microbiology graduate course.