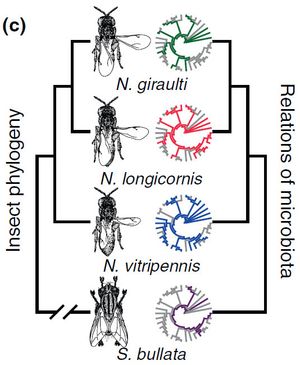 The parallel relations between a phylogeny of insect species based on mitochondrial genes (the parasitoid species Nasonia and their host fly (Sarcophaga bullata) and a dendrogram of the microbial community relations based on a bacterial gene. Note the close correspondence between the phylogeny of the two lineages. Source.

No doubt, one of the defining events in evolution was the acquisition by some primitive cell of bacterial symbionts that became mitochondria and chloroplasts. Symbiosis has, in fact, driven evolution in many other ways and has had a profound effect in the origin of species. For a deeper understanding of how symbioses has affected speciation, a pertinent review by R. M. Brucker and S. Bordenstein is well worth reading. Based on their own research with the insect endosymbiont Wolbachia, the authors describe how symbiosis affects the reproduction of the insect hosts and, ultimately, the fitness of the species. As the authors point out, there is complementary arithmetic in this relationship: symbiosis makes two organisms into one; speciation, one into two!

Some of the examples they cite are startling. For one, Wolbachia, like some other bacterial symbionts of insects, induces parthenogenesis in the insect host, a form of asexual reproduction that does not involve fertilization and leads to what is called “asexual speciation”. Click here and here for some of our previous posts on Wolbachia. For another, Drosophila flies reared on different diets house different microbiota, and show strong mating discrimination; ergo, the symbionts dictate who mates with whom. Further, bacterial symbionts that we could classify as vertically-transmitted, nutritional mutualists (e.g., insect symbionts in the genus Buchnera) assist in resource exploitation, thereby creating new ecological opportunities for their host. In some cases, host and endosymbiont appear to have evolved together. There is even more. Endosymbionts can also induce cytoplasmic incompatibility.  Here the offspring of infected males and uninfected females are sterile, therefore, unproductive. In other cases, the offspring of hybrid matings become more susceptible to infection than non-hybrids, which may reduce their fertility and viability. How all of these examples of symbioses affect speciation is discussed in detail in the article.

I will also like to add a word of gratitude to the authors for pointing out that the theory of the origin of eukaryotes by symbiosis, which had its start in the late 1800’s, had a more persuasive origin with the work of Ivan Wallin in the 1920’s. The earlier work had dealt with the nature of chloroplasts, which had been thought to divide in forms akin to those of cyanobacteria. But the proposal that mitochondria were bacterial in origin was first emphatically championed by Wallin.

And I cannot end this post without saying something more about Wallin and his contributions to symbiosis and speciation. Ivan Wallin was a professor of Anatomy at the University of Colorado in Denver between 1918 and 1969. He had a reputation for being an original and intimidating teacher. He didn't lecture, but peppered students with questions as he dissected a cadaver. The wrong answer got the poor student a whack in the chest. But he was also known for the parties he threw for his students. His originality also spilled over to his tenet that mitochondria were actually bacteria because the two were indistinguishable by sight. He wrote a series of nine papers presenting his theories and experiments, and also a book aptly called Symbionticism and the Origin of Species. Alas, he claimed in one of his papers that he had definitive proof for mitochondria being bacteria: he could culture them outside of the cell. This was a clear case of overreaching, and it tarnishedhis reputation as a scientist. On the other hand, he wrote these prescient words, which I leave for your consideration: It is apparent that, if mitochondria are of bacterial nature, we would not expect them to exhibit the properties of hardy, free-living microorganisms, but rather the properties of such forms that have developed an absolute symbiotic relationship. Again, there is no reason why one should assume that a bacterial mitochondrium should exhibit pathogenic properties, at least under normal conditions.