Life On the Edge: What Happens When Phosphorus Is Limiting? 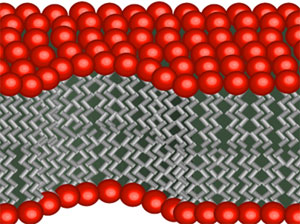 For many bacteria, scarcity of phosphorus—serious though it may sound—is not insurmountable. True, phosphorus is needed for nucleic acids and phospholipids, but many prokaryotes have found a way to reduce their need of this element for phospholipid synthesis. But first, why are there phospholipids in the first place? In these compounds the phosphate links the glycerol lipid backbone to a polar “head group” that possesses a free hydroxyl group. In bacteria, the most common head groups contain ethanolamine, glycerol, or, less frequently, serine or choline (Fig. 1). These polar ends can interact with water or with each other, while the hydrocarbon tails interact with each other to form the lipid bilayer. Provided with such amphipathic constituents, a cell can surround the rest of the cell machinery with a semipermeable membrane containing proteins embedded for various functions.

But what happens when phosphorus is in short supply, as it is in the oceans and some inland environments? The cells still need lipids with polar head groups. Bacteriahave evolved a number of clever (some may say fiendishly clever) ways to nevertheless make membranes without phosphorus. Let me divide these strategies into two groups, those that use sugars and those that use an amino acid or parts thereof. 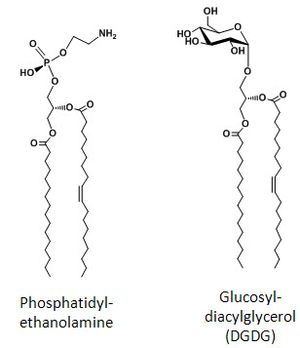 Sugars first: Glycolipids in bacteria usually have a sugar attached directly to a diacylglycerol moiety (Fig. 1). A dramatic early finding was that diglucosyl-diacylglycerol (DGDG) almost completely replaces phosphatidylethanolamine (PE) and phosphatidylglycerol (PG) in P-limited cultures of Bacillus subtilis. In the Gram-negatives, Pseudomonas diminuta has an unusually high proportion of glycolipids. When P is limiting, PG is largely replaced by glucuronic acid-containing glycolipids, an example of an acidic glycolipid replacing another acidic phospholipid. Indeed, a negatively-charged lipid seems to be a requirement for bacterial membranes. Does this hold true in other situations? Enter another negatively-charged glycolipid, this one with a difficult name— sulfoquinovosyldiacylglycerol (SQDG)—but a simple structure. It has a sulfate residue on carbon-6 of 6-deoxy glucose (Fig. 2). These compounds were first found in plants and algae, then later in bacteria. They appear to function in the photosynthetic thylakoid membranes of plant cells. Global studies of phytoplankton in the Pacific Ocean and in the Mediterranean Sea have shown that SQDG replaces phospholipids in marine organisms. In the Mediterranean Sea, the ratio of SQDG to PG was found to increase from west to east, which inversely correlates with the concentration of phosphorus. Similar findings have been made in the North Pacific Subtropical Gyre. Prochlorococcus, the cyanobacterium that dominates the phytoplankton there, has SQDG as its predominant lipid (click here and here). This and the following may be examples of geographic isolation leading to the evolution of new species. 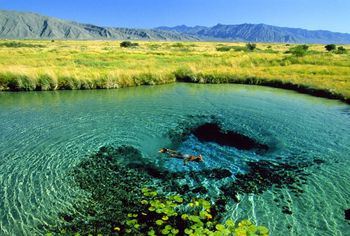 Cuatro Ciénegas, Coahuila, Mexico, the home of Bacillus
coahuilensis, a maker of various glycolipids, including
one containing sulfur. Source.

Bacillus coahuilensis, isolated from the water column of a desiccation lagoon in the Cuatro Ciénegas Basin in the Chihuahan desert of northern Mexico, grows in a very P-poor environment, <0.3 μM. SQDG, DGDG, and a monoglycosyldiacylglycerol, are its major lipids. Since other Bacillus species do not have genes for making SQDG, the authors suggest that these genes were acquired through horizontal gene transfer from a cyanobacterium. For an earlier post in this blog on sulfur–containing lipids, click here.

Lipids derived from amino acids. Ornithine lipids (OL) in bacteria have a long history (even if many readers probably never heard of them). At first there were only a few reports of their existence, but after the genes for specific acyltransferases needed for their synthesis were identified and sequenced by Otto Geiger and colleagues, it became apparent that they are widely distributed among prokaryotes. They are formed by sequential addition of a β-hydroxy-fatty acid to the α-amino group of ornithine by l-ornithine acyltransferase. A second fatty acid is added to the free hydroxyl group of the amide-linked chain to form a piggy-back second acyl chain by another enzyme (Fig. 2). In this form, OL has no net negative charge and serves as a replacement for phospholipids such as PE under phosphate-limiting conditions in Pseudomonas aeruginosa. Not surprisingly, under these conditions the needed acyltransferaseis greatly induced. Other examples? Burkholderia cepacia undergoes a massive shift from phospholipid to ornithine lipids and Mesorhizobium loti does so partially.

Betaine lipids are yet another way to deal with conditions of P-limitation. They occur naturally in algae, bryophytes, fungi, and some photosynthetic bacteria. One, diacylglyceryl trimethylhomoserine (DGTS, Fig. 2) is made in Rhodobacter sphaeroides by transfer of a part of the S-adenosylmethionine (AdoMet) molecule to a diacylglycerol to yield diacylglycerol-O-homoserine. This undergoes three stepwise methylations from S-adenosylmethionine to form DGTS. The terminal part of this molecule resembles that of phosphatidylcholine. DGTS replaces some of the phospholipid in R. sphaeroides when P is limiting (Benning et al. 1995). Under limiting P conditions, the free-living symbiotic bacterium Sinorhizobium meliloti increases its content of sulpholipids, ornithine lipids, and DGTS.

With this brief tour around the lipid landscape it should be apparent that bacteria have evolved several clever ways to cope with P-limitation. The RNA world hypothesis posits that RNA molecules were the basis of the early self-replicating systems that eventually gave rise to life forms that use RNA and DNA for information storage. If true, the earliest forms of life evolved in the presence of phosphorus, and phospholipids would have evolved very early. We can speculate that as some of the oceans and inland seas became P-poor, the mechanisms I have described evolved to supplant the need for phospholipids, thus sparing P for use in those molecules essential for life in which the P is seemingly irreplaceable.

Howard is professor of Microbiology at the University of Pennsylvania Perelman School of Medicine.