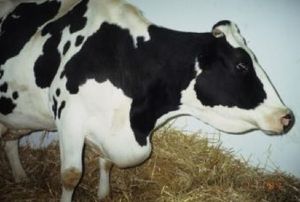 The tumor shown here was caused by bovine leukemia
virus (BLV). BLV’s mechanism of tumorigenesis has
long been a mystery, but researchers have recently
discovered a virus-encoded miRNA that may be the
culprit. Source.

Among retroviruses, the deltaretrovirus genus is something of a shady bunch, its members lurking in the shadows, causing trouble in the form of persistent infections that result in lymphomas and leukemias. At this time, we know of no endogenous sequences that might be their ancestors—the lone retroviral genus (of seven) for which this is the case, as if they’ve intentionally covered their tracks to elude the authorities. Fittingly, two members of this clan are emerging as particularly resourceful and crafty, exposing novel tricks in the viral arsenal.

These two are bovine leukemia virus (BLV), which infects cattle and causes B-cell tumors, and human T-lymphocytic virus (HTLV)-1, which causes T-cell tumors in its human hosts. Merry blogged about the stealth method of cell-to-cell spread employed by HTLV-1—how it uses immunological synapses to directly access target cells and avoid the exposure to immune defenses that a free virus particle would face. Not to be outdone by its sly associate, BLV has recently won the honor of being the first RNA virus convincingly shown to encode microRNAs.

MicroRNAs (miRNA) are short segments (about 22 nt) of RNA that bind to complementary sites in the 3’UTRs of mRNA transcripts to regulate expression. Although ubiquitous among multicellular organisms and encoded by numerous DNA viruses (reviewed here), searches of RNA viruses have failed to uncover any of these elements. 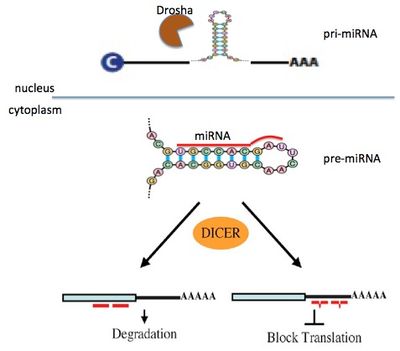 miRNA processing. In the nucleus, Drosha cleaves an RNA stem loop from a transcript resembling mRNA (pri-miRNA), generated by Pol II. The stem loop (now known as pre-miRNA) is then exported to the cytoplasm, where it is further cleaved by Dicer into miRNA. One or both arms of the stem loop may serve as miRNA. The miRNA regulates expression by binding to a region of complementarity on an mRNA, leading to degradation or blocking of translation. Adapted from The Worm Book, a blog on C. elegans and here.

The going hypothesis for their notable absence here involves the canonical method of miRNA processing. Most miRNAs are transcribed by RNA polymerase II (pol II), resulting in a long transcript that resembles mRNA with its 5’ cap and a 3’ poly-A tail, and in between, a stem-loop structure that will become the miRNA. This stem loop is cleaved from the transcript by an endonuclease known as Drosha, generating the “pre-miRNA” that is then exported to the cytoplasm, where it is further chomped by the enzyme Dicer and processed into its final miRNA form.

The first problem for RNA viruses—most of which replicate in the cytoplasm—is that the Drosha machinery is in the nucleus, effectively eliminating access for all but the retroviruses and orthomyxoviruses. However, a second problem exists, specific to viruses with RNA genomes. The presence of a miRNA-encoding stem-loop structure in a viral genome could serve as a Drosha substrate, tempting the enzyme to cleave it. Thus, viral genomic and sub-genomic transcripts alike would be vulnerable to Drosha-mediated cleavage—a tactic that would surely earn the virus a “Darwin Award,” literally taking a bite out of its replicative ability.

Since the genome of an RNA virus consists of . . . RNA, a viral genome carrying a miRNA stem loop would look like a Drosha substrate, and risk cleavage—not a wise replication strategy for a virus. 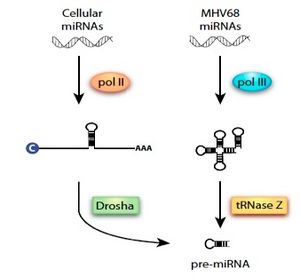 An alternate route for miRNA processing. MHV68 miRNA is processed from a short, pol III-derived transcript. The pre-miRNA is cleaved not by Drosha but by tRNase Z. Such a strategy could allow an RNA virus to avoid genome cleavage during miRNA processing. Adapted from here.

Good virologists, like good detectives, never underestimate their subjects’ potential for craftiness. Kincaid and colleagues knew of an alternate miRNA-processing pathway that is used by a DNA virus—mouse herpesvirus 68 (MHV68). In this case, pol III (which normally produces short transcripts such as tRNA) generates a short transcript resembling a fusion of a tRNA and a pre-miRNA stem loop. This transcript looks nothing like the longer mRNA-like transcripts that Drosha recognizes, and indeed the stem loop is cleaved by a different endonucleause. The researchers reasoned that if an RNA virus were to generate miRNAs from subgenomic transcripts that look nothing like Drosha substrates, they could avoid genome cleavage. They further reasoned that the RNA viruses most likely to employ such a strategy would be retroviruses, since they replicate via a DNA intermediate in the nucleus, where the first step of miRNA processing occurs.

Based on their hunch, they designed an algorithm to sniff out RNA pol III promoter elements in the vicinity of predicted RNA stem-loop structures and applied it to an extensive collection of retroviral genomes. Only a few candidate miRNA-encoding sequences were identified. The researchers expressed these sequences in cells, and analyzed the resulting RNA with probes designed to hybridize to the arms of the stem-loop structures. This process netted them two strong miRNA candidates, both from the genome of BLV.

(A) Kincaid et al. wrote a computer program to find pol III promoter sequences in a database of retroviral genomes. They found two regions of promoter elements (represented by triangles) alongside predicted stem loop (SL) encoding regions (white arrows). They designed RNA probes to each arm (5p and 3p) of the predicted SL structures. (B) The SL regions were expressed in 293T cells, and the resulting RNA was analyzed on a northern blot with the 5p and 3p probes, resulting in bands corresponding to the predicted miRNA. SG, synthetic gene (the SL region); NC, negative control. (mir-19a is a host miRNA, for comparison). Source.

In order to determine whether BLV actually expresses the predicted miRNAs during an infection, the researchers sequenced RNA from a cell line that is persistently infected with BLV. In addition to the two miRNAs identified by their screen, they found three more species of miRNAs whose sequences corresponded to predicted BLV stem-loop structures. All five sequences mapped to the same noncoding region of the genome, forming a sort of miRNA cassette.

After a few nifty experiments using inhibitors of both pol II and Drosha, the authors confirmed their original hunch by showing that BLV miRNAs are indeed processed by a non-canonical pathway, independently of these two enzymes. They further showed that the BLV miRNA stem loops in the context of a longer mRNA-like transcript are not cleaved. Why is Drosha not recognizing them? It is unknown, but may involve their slightly smaller size or a different conformation. These findings suggest that BLV is able to generate miRNAs from short, sub-genomic transcripts without subjecting its genome to cleavage—resourceful, indeed!

But there’s an added twist to the story. The authors noticed that the “seed” sequence (the region of complementarity by which an miRNA binds to its target) of one of the BLV miRNAs (miR-B4) matches that of a known cellular miRNA known as miR-29. In mice, experimental overexpression of miR-29 leads to B-cell tumors much like those seen in BLV-infected cattle. Furthermore, the authors show that two of the genes found to be downregulated in miR-29-induced tumor cells are similarly downregulated by the BLV miRNA (miR-B4), hinting at BLV’s mechanism of B-cell tumorigenesis.

A peculiarity of BLV is its ability to make mischief while lying low— causing tumors while maintaining a low replication rate and very low levels of viral mRNA and protein expression. The secret to this ability may well rest with this cadre of miRNA henchmen. First, by functioning as analogs to host miRNAs, the viral miRNAs can sabotage the cellular machinery, yet evade cellular immune responses by blending in with the local crowd. Second, the authors point out that one or more BLV miRNAs could, in theory, autoregulate viral expression by binding to the genomic or sub-genomic transcripts of the virus itself.

Like any good detective work, one solid finding suggests numerous fresh leads that call for further investigation. For example, Bryan Cullen wonders in his commentary if a BLV mutant that lacks miR-B4 would be stripped of its tumor-producing powers. And what do the other BLV miRNAs do? Also, it’s worth noting that the algorithm Kincaid et al employed was aimed at one specific class of pol III promoters, with the elements arranged in a particular order, and therefore missed three of the five BLV miRNAs that did not fit the motif. Therefore, broadening the search to include noncanonical pol III promoters may uncover additional retroviral miRNAs that were overlooked in prior studies. Clearly the detective work of Kincaid and colleagues has significantly expanded the deltaretrovirus dossier, bringing us a few steps closer to unraveling the MO of this cagey crew. 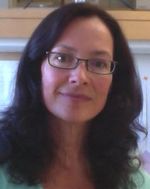