« Life On the Edge: What Happens When Phosphorus Is Limiting? | Main | The Road to Microbial Endocrinology »

Requiem for a Machine 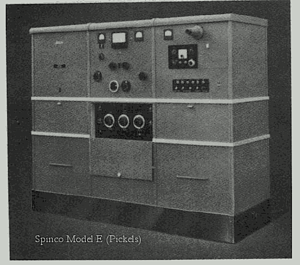 Here’s a challenge for present-day systems biologists. Say you wanted to find out how many ribosomes are present in cells growing under different conditions. How would you do it? You might think of using quantitative PCR to measure the amount of rRNA inside the cell. However, you could end up with an overestimate because some of the rRNA may not yet be assembled in mature ribosomes. For instance, add chloramphenicol, a protein synthesis-inhibiting antibiotic, to a culture and you will measure increases in the cellular levels of rRNA due to the accumulation of non-functional, immature ribosomes. Perhaps, then, you would roll up your sleeves and run a sucrose gradient to separate the mature ribosomes from their precursors and immature forms by size fractionation, but this is a labor intensive method that not many people like to do these days. We’ll agree that making such measurements may not be as easy as it sounds. So let me reminisce about how we carried this out in the old days. All it took was a fancy apparatus and some chutzpah. 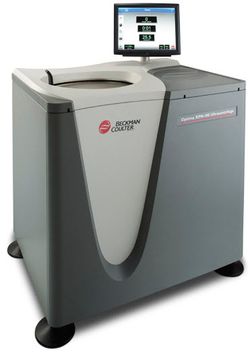 ...and now (the Beckman-Coulter Optima X).

From about 1950 to 1970 or so, the most conspicuous device in microbiology and biochemistry departments, except for the electron microscope, was the analytical ultracentrifuge. Made by Beckman Instruments, it was known as the Spinco Model E (not to be confused with the Jaguar type E) and it was the pride of research departments. It was an imposing machine indeed, about the size of two refrigerators. It was originally developed for applications requiring determination of the purity, molecular weight, and molecular interactions of proteins and nucleic acids. Meselson and Stahl used a Model E for their classic experiment that demonstrated the semiconservative replication of DNA. In time, various kinds of gel electrophoresis machines appeared on the scene that allowed measurement of many of the same properties of macromolecules. The Model E now sat quietly idle.

Ultracentrifugal analysis of a lysate of S. typhimurium. Cells were grown in a minimal medium containing amino acids, harvested and broken up using a French pressure cell. The lysate was placed in the centrifuge cell and pictures were taken 5 and 7 min after reaching a speed of 50,74 0 rev/min. Sedimentation is from left to right. Each peak represents the boundary of a sedimenting component with the indicated sedimentation coefficient. The 70S ribosomes are seen as two sedimenting peaks (the heavier one being a labile, complex form of the ribosomes). The 7S peak, representing the cell’s soluble proteins, was resolved after further centrifugation.

In the late 1950’s, we used my department’s prized Model E to determine the ribosome concentration of bacteria growing at different growth rates. (This followed earlier studies where we had measured total RNA as a function of growth rate.) How did we do this? We broke bacteria apart and— this is where gall came in— introduced the entire lysate straight into the cell of the centrifuge. One usually only offered purified preparations to the Model E, and here we were sullying it with an utterly uncharacterized gemisch. But we did just that, thanks to the people who taught us this technique—the physicists-turned-biologists at the Department of Terrestrial Magnetism of the Carnegie Institution of Washington (more about them later). 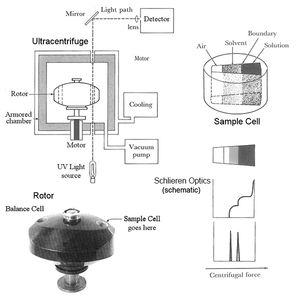 A schematic diagram of a Model E analytical ultracentrifuge. The rotor has two holes into which special cells, one containing the material to be examined, are inserted. The cells have quartz windows, allowing the optical analysis of the contents as they spin. Source.

After we loaded our sample and turned the machine on, the “debris fraction” containing cell envelope fragments sedimented to the bottom of the cell as the rotor came up to speed. The next heaviest components, thus the next to spin down, were the ribosomes. We could now easily and quite precisely determine their relative amounts, as the special (Schlieren) optics of the Model E yielded a Gaussian curve whose area was proportional to the amount of ribosomes. But how to get from this number to ribosome concentration? What we did is to keep the machine running until the next large fraction sedimented into view, this fraction being the soluble proteins of the cells. Amazingly, this mixture of thousands of proteins also followed a Gaussian curve, suggesting the odd fact that the molecular weights of these proteins were nearly normally distributed. In any event, we now could determine the ratio of ribosomes to soluble protein, a reasonable measure of ribosome concentration. This method was simple, accurate, and not terribly time consuming, once you got used to all the buttons and dials. But it wasn’t all that long afterwards when the once useful behemoth of a machine became obsolete and, with considerable sadness, we shipped it to the dump. Analytical ultracentrifugation is enjoying a rebirth, thanks to a modern line of analytical ultracentrifuges called Optima X produced, as was the Model E, by what now goes by the name of Beckman-Coulter.

Arguably, the pioneering work of a group of ex-physicists at this institution stands as a forerunner of modern-day systems biology. I am not sure why they worked in a department with a name so distant from biology, but I remember that at least some of them had worked together during World War II to develop the “proximity fuze (sic),” a device that triggered a bomb to explode above the intended target.

For reasons that escape me, this group decided to work on many of the biochemical steps involved in biosynthesis by E. coli. This they did with a combination of insight and simplicity. Basically, they grew the organism in a defined minimal medium, added one of a number of radiolabeled compounds that would be incorporated into specific metabolites, then fractionated the cells and measured the amount of radioactivity in various cellular components. Note that, at the time, the field had been dominated by biochemical studies that almost exclusively used cell-free extracts prepared from ground-up bacteria. Their novel experiments, carried out with unusual precision, revealed not just pathways but also kinetic parameters. By looking at everything in the cells, not just some predefined string of biochemicals, they unearthed some unexpected (and, I suppose, forgotten) facts. One that sticks in my mind is that about 20% of E. coli’s proteins turned out to be soluble in ethanol! I would never have guessed.

Their work was only occasionally published in the research journals. Rather, they presented their work in reports to the Carnegie Institution. These culminated in a book entitled Studies of Biosynthesis in Escherichia coli, which went through two printings (1955 and 1957). It was authored by R. B. Roberts, D.B. Cowie, P. H. Abelson, E. T. Bolton, and R. J. Britten. An abstract can be found here and the book can still be obtained from used book dealers. It’s a genuine classic and very much worth reading.

I've always credited The Model E, in the hands of Stanier, Pardee, and
Schachman for the discovery of ribosomes and
Roberts, the senior author of that wonderful book for naming them."It
describes them well and has a pleasant sound.