« The Road to Microbial Endocrinology | Main | TWiM #40: A Mecca for Microbiology »

Revisiting BYOG: Bring Your Own Gene 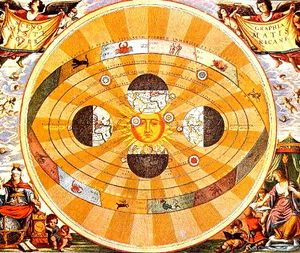 This image, that accompanied the original BYOG post, is a 17th century illustration of the Copernican model of a heliocentric universe. Source.

For this, my last post as co-blogger, I chose to loop back to my very first post about my favorites among the many Small Things, the phages. That was BYOG: Bring Your Own Gene, published in March of 2008, recounting what was at the time a totally new story for me. Amazing! Those ingenious cyanophages brought along genes to keep the energy flowing for phage replication by maintaining active photosynthesis in their doomed cyanobacterial host.

The story back then was rather straightforward. The focus was on the genes that encode the two proteins at the core of photosystem II, D1, and D2, both proteins being subjected to photodamage. D1 in particular has an especially high turnover rate. The notion was that when the phage shuts down host protein synthesis, damaged D1 would not be replaced, photosynthesis would decline, and this would impact phage replication. Made sense.

Indeed, it was a good story. It had begun back in 2003 with the first report of photosynthesis genes encoded by a phage. That was followed in 2005 by a paper showing that these genes are actually expressed and translated into proteins during infection. By 2007 more such “host genes” had been identified in various phage genomes. Increasingly it was realized that these genes, though not essential for phage replication in the lab, provided fitness benefits to the phage. They were given the name auxiliary metabolic genes (with the acronym AMG). Since then, the array of AMGs has grown and includes genes involved in phosphate acquisition, nucleotide metabolism, and cytoskeletal construction (soon to be discussed on STC), as well as numerous genes involved in photosynthesis.

And we’ve not reached the last chapter yet, not even for the cyanophages. A 2011 paper demonstrates that cyanophage manipulation of host photosynthesis is far more sophisticated than simply making more of the D1 and D2 proteins. In cyanobacteria, such as Prochlorococcus, during the day the energy (ATP) and reducing power (NADPH) generated by photosynthesis are used by RuBisCO and the other enzymes in the Calvin cycle to “fix” carbon. At night, carbon (in the form of glucose-6-phosphate) is routed through the pentose phosphate pathway where it is used to generate, among other things, ribose-5-phosphate and NADPH, both of which are needed for nucleotide synthesis. These two pathways are tightly controlled; transcription of the genes involved occurs at specific times in the daily light-dark cycle. One gene that is expressed in the evening encodes the protein CP12, an inhibitor that blocks the Calvin cycle at night.

A cyanophage may not want to fix carbon, but it surely does want to synthesize nucleotides. Thus one would imagine that the phage would benefit by routing the ATP and NADPH produced by the light reactions of photosynthesis away from carbon fixation and into the synthesis of nucleotides for DNA synthesis. This said, it comes as no surprise that cyanophages encode CP12. And the same cyanophages also carry genes for the pentose phosphate pathway and dNTP synthesis. This is not the casual pick-up of genetic cargo and moving it from host to host, but fine-tuned and intricate manipulation of the host metabolism to benefit phage replication. We have come to expect this level of sophistication in eukaryote viruses that have evolved fancy footwork to subvert our immune system, but this is in a lowly phage. 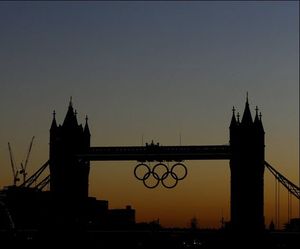 And here’s something else phage-related...

As London braced for the summer Olympics, the folks at Nature Reviews Microbiology hosted their own Microbial Olympics, an entertaining and educational happening held at the NRMicro stadium. I had the opportunity to participate by reporting the sprint where, I am happy to say, my beloved phages took the gold medal. Check it out along with the other thrilling competitions here, or click here to download the pdf.

Merry, I know that I speak for literally everyone who has read this blog when I say "thank you" for all your wonderful and challenging work on this blog! I learned a great deal from every single post you wrote/edited, and benefited from your editing and thoughtful comments myself when I contributed occasionally. Truly, STC is an important resource on many different levels, from educators like myself to top flight research scholars....and you were an integral part of creating that resource. I wish you the very, very best, living in such a lovely land with such scenery!