Immunogold staining of the ovary of the tick Ixodes ricinus using antibodies against the major flagellar protein, FliD. Arrows indicate the gold particles present on the surface and inside bacteria-like structures. Source.

I don't get tired of symbioses, something I attribute to the Power Law of Symbiosis I just made up: Interacting genomes are more interesting than single ones by the nth power of their numbers, where n is a matter of personal preference. Here I relate two examples that should make the point.

My first story is about a finding that should have caused its Italian researchers to use a mild expletive, such as “Corpo di Bacco!” (“By the body of Bacchus!” I grew up in Italy, which entitles me to this bit of linguistic irrelevancy.) What they found is amazing. That a bacterial endosymbiont had been found to dwell inside the mitochondria of ticks was surprising in itself (see a previous post), but to now find them to possess what looks to be a complete set of flagellar genes, twenty-six in number, is stunning. First, do these genes actually work, that is, actually produce flagella? Convincing proof of that is still lacking because, as the authors point out, observing flagella in electron microscope sections is not easy; they are very hard to distinguish when cut crosswise. However, these genes are transcribed and one of their products can be identified on the surface of the endosymbionts. In addition, these genes have conserved domains and structural features typical of other flagellar genes. 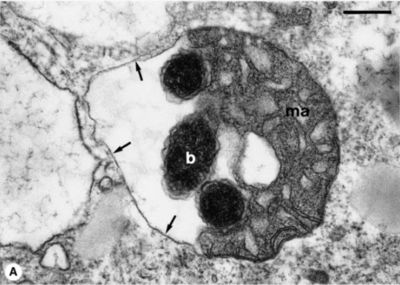 To put this in context, the symbionts, known as Candidatus Midichloria mitochondrii are members of the rickettsiae, a group never before shown to have flagella or flagellar genes. The Candidatus name is a taxonomic straightjacket denoting that the organism has not been cultivated on artificial media (but, like many endosymbionts, it may never well be!). So, do these unusual rickettsiae use flagella for motility? We would surely like to know.

This finding is not totally unheard of among symbionts. Endosymbionts unrelated to these, such as those of aphids (Buchnera) and tse-tse flies (Wigglesworthia) also possess flagellar genes.  Keep in mind that in some bacteria, flagellar components are involved in secretory systems, such as T3SS and T6SS. The authors posit:  It is reasonable to assume that intracellular bacteria such as Ca. M. mitochondrii and W. glossinidia alternate trophic phases (in which flagella and motility are not required) with phases of the cycle in which a flagellar apparatus is used for motility or for other functions. But, as they point out, nothing is known about how Ca. M. mitochondrii enters the mitochondria, therefore it’s not possible to speculate if flagella participate in the invasion of the organelle, appealing though this may be. Given the extraordinary life habit of this bacterium, we can expect further developments, some of which may turn out to be just as startling as these.

Let’s follow the flagellar thread to a second story that uncovered a role for flagella in a symbiosis. Here a bacterium and an archaeon communicate via the bacterium’s flagella to establish a syntrophic (cross-feeding) relationship of mutual benefit. Both symbionts have long names, Pelotomaculum thermopropionicum and Methanothermobacter thermautotrophicus, respectively. The bacterium ferments propionate to acetate, bicarbonate, and H2, a highly endergonic or energy unfavorable conversion. The reaction is driven by the hydrogen being siphoned off by the archaeon for its methanogenesis. Propionate  fermentation can proceed as long as the partial pressure of H2 is kept low by the archaeon. Such interactions have been known for some time. (See a most interesting review of such syntrophic relationships by Wintermute and Silver.)

What’s new here is that when grown together, these two strains form aggregates with the cells linked closely by the bacterium’s flagellum. Now this is unexpected. Perhaps there are other examples, but I haven’t heard of flagella being used for something other than locomotion, certainly not for forming interspecies aggregates. The close proximity (about 2 μm) of the two partners is needed for efficient transfer of the hydrogen, which is the apparent reason why flagella are needed. The bonding of the bacterial flagella is quite specific, limited to this archaeon and only one other also known to form syntrophic associations with these bacteria.

The two strains are high-temperature anaerobic sewage digesters and can be grown singly in culture, so this is not an obligatory partnership. But it’s good for business, and not just as a mechanical means of bringing the two partners close to one another. Transcriptome analysis of the archaeon showed that a substantial number of genes in the archaeon were up-regulated after the contact with a purified protein from the cap of the flagellum (FliD). The addition of this protein alone led to upregulation of over fifty genes involved in the methanogenesis pathway and to increased methane formation. These findings suggest that the bacterium directly communicates with the archaeon via its flagellum. This, too, is news, as in most interspecies signaling is mediated by small molecules and not by a structural protein.  One example of communication via a protein, which we posted before, is seen in Proteus mirabilis, where a surface protein enables cells of different strains to recognize one another. Can we conclude that the flagella of this bacterium play two roles, one as the structure used to keep the two partners of the consortium in proximity, the other as a signaling molecule, telling the archaeon that it’s now time to make methane?

Such findings raise a lot of questions. How widespread are syntrophic interactions between species? What physiological phenomena, besides the metabolic, do they address? And, as Marx points out in an exciting commentary, consortia may serve as the assembled parts in synthetic biology. For consideration of social evolution in multispecies consortia, see an insightful colloquium paper by Mitri et al. Microbial consortia are being found with increased frequency. Surely, this must affect our mindset regarding microbes in nature.