« Who Would Have Thought It? Which Would You Bet Are Easier to Cultivate, Abundant Bacterial Species or Rare Ones? | Main | The Higgs Boson and Biology »

Begetting the Eukarya: An Unexpected Light 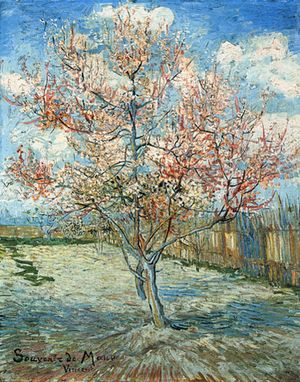 Concerning the origin of eukaryotic cells, much has been written but almost everything remains to be settled. No one disputes that mitochondria derive from free-living bacteria that established an intimate symbiotic relationship with a host of some kind and progressively turned into organelles, workhorses of metabolism, and a hallmark of eukaryotic organization. But consensus ends here; the nature of that host, the timing and circumstances of the partnership, and its role in generating the conspicuous complexity of eukaryotic cells all remain elusive and entangled in controversy. In a comprehensive review of the subject published in 2006, Martin Embley and William Martin (6) concluded bleakly that the evolutionary gap between prokaryotes and eukaryotes is now deeper, and the nature of the host that acquired the mitochondrion more obscure, than ever before. No one will claim that the darkness has been lifted, but just in the past few years this intractable subject has begun to appear in a fresh light.

A good place to start is an article by Miklòs Müller and nine co-authors in the June issue of MMBR (15). Unless you are in the business, a meaty review of energy metabolism in anaerobic eukaryotes may not set your pulse racing; but if you are curious about the origin of mitochondria and their place in the history of the eukaryotic cell, you will find here an evidence-based summary of where that inquiry stands. For present purposes, let me highlight just three points from that article.

Taken together, these findings (and others omitted from this condensed summary) support a coherent thesis, one that departs quite radically from the “standard model” (5). Until about a decade ago, the general presumption was that the essential features of eukaryotic organization evolved autogenously in a proto-eukaryotic lineage, without contributions from other organisms. The symbionts that eventually became mitochondria would have been acquired, probably by phagocytosis, by a host that already possessed the essential characteristics of eukaryotic cells including a nucleus, endomembranes and a cytoskeleton (1, 4, 11). This entity has been dubbed the “primitive phagocyte”. Müller et al., and many others (see below), advocate a different take on the genesis of the eukaryotic order. At an early stage in the evolution of what would become the eukaryotic cell, a facultative bacterium akin to today’s alpha-proteobacteria forged an intimate association with a host whose nature is left open (but see below). By then, the diversification of the bacteria must have been well underway. Oxygen had begun to accumulate, at least locally, but the atmosphere and the oceans were still largely anaerobic (and would long remain so). A date around two billion years ago seems a fair guess. That was a fateful encounter, quite possibly a unique event. The symbiont contributed many genes to the consortium, and set it on track to evolve greater complexity, autonomy and sophistication than anything known in the prokaryotic universe.

What was it about symbiosis that made so huge a difference? As outlined in an earlier contribution to this blog (21), I have been impressed by the thesis of Lane and Martin (12) that it’s basically about energetics: thanks to its many compartmentalized energy packs, derived from the symbiont, the consortium could mobilize far more energy per gene than could a prokaryotic cell. Energy galore supported expansion of the genome, which in turn underpinned rising size and complexity. So we have two very different narratives of the origin of mitochondria, and of the cells that harbor them. In one, symbionts come late into advanced proto-eukaryotes; in the other, they come early and help shape the eukaryotic order.

It takes at least two to make a relationship. Who, then, was the partner that hosted the precursor of mitochondria? That issue continues to bedevil the entire field of cell evolution, with advocates and evidence to support almost every conceivable answer.

Carl Woese and colleagues (16,18) taught us all that the nuclear lineage of eukaryotes is one of three primary lines of descent, a sister-clade to the Archaea, whose roots reach back almost as far as the last common ancestor of all cellular life. Thomas Cavalier-Smith has articulated and tenaciously defended the thesis that the elusive host originated from the Eubacteria, undergoing a series of transfigurations that eventually gave rise to both Archaebacteria and to the proto-eukaryotic phagocyte. And molecular biologists increasingly favor the proposition that the eukaryotic line is fundamentally chimeric, originating in a symbiotic association between two prokaryotic cells, one bacterial and the other archaeal. Depending on whom you read, that may have happened once or on several occasions, with the archaeon variously the donor of the consortium’s genetic core, its nucleus, much of the cytoplasm or all of the above. To cite but one much-discussed example, William Martin and Miklòs Müller (14) proposed a syntrophic association in which a facultative anaerobic eubacterium, producing hydrogen gas, sustained a methanogenic archaebacterium; they also spelled out a sequence of transitions that would have turned that partnership into a eukaryotic cell. A decade ago, one expected the rising torrent of genetic and phylogenomic evidence to render a clean verdict. That did not happen, leaving a palpable sense of frustration (8). 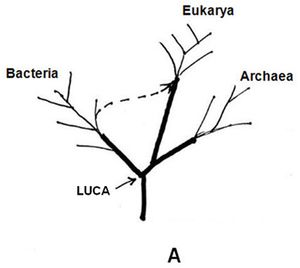 Controversy is the lifeblood of science, and sometimes its bane too. But scientific disputations are seldom battles to the death. More often than not, they find resolution in a synthesis that draws on the insights of several protagonists but transcends them all, and that may be happening now with regard to the elusive eukaryotic host. Movement begins with the provocative finding from Martin Embley’s laboratory (3) that the phylogenomic relationship between eukaryotes and prokaryotes depends on the particular statistical model employed to analyze it. Ribosomal RNA data have long been the mainstay of the conventional triple-stemmed tree of life, with the Eukarya as one of the primary lineages (Fig. 1A). But when the sequences are interrogated using the latest and most sophisticated procedures, they show something quite different: data from both rRNA and highly conserved proteins indicate that eukaryotes branch from within the Archaea, and are specifically related to the phylum Crenarchaeota. A similar conclusion was reached by Eugene Koonin’s team (20): they have eukaryotes arising as an early branch of the Archaea, an unknown and possibly extinct lineage that diverged prior to the radiation of Archaea into their contemporary forms. 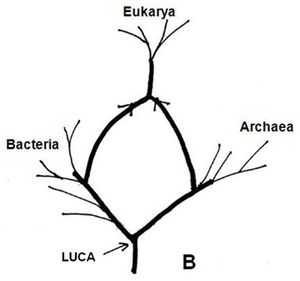 Such claims will surprise many but not James Lake, who first inferred a specific relationship between eukaryotes and “Eocytes” (=Crenarchaeota) a quarter of a century ago, and has maintained that position ever since (17). His “ring of life” (Fig. 1B) has long been overshadowed by the three-domain tree of life, and if it rested solely on phylogenomic analysis would still be viewed with some suspicion. (My generation, at least, understands that statistics are like a bikini: what they reveal is interesting, what they conceal is vital.) But all of a sudden, confirmation has begun to pop up from other quarters, too. Most notable is the discovery of true orthologs of actin, apparently involved in cell morphogenesis, in both Thermoproteales (an order of Crenarchaeota) and in Korarchaeota (7,9), both deep branches of the archaeal bush. Orthologs of tubulin have turned up in Nitrosoarchaeum, a member of the novel phylum Thaumarchaeota, which is another ancient branch (19). Just to confuse matters, tubulins also occur in the bacterial phylum Prosthetobacter. And Crenarchaeota possess a membrane–remodeling system related to the ESCRT-III system of eukaryotes (13). Taken together, the data suggest that the eukaryotic lineage branched off early in the evolution of the Archaea, prior to the appearance of the current lines, and that they retain many traces of that common ancestry.

Don’t look now, but just possibly a glimpse of the elusive host is taking shape: neither a classical primitive phagocyte nor a standard prokaryote, but something with features of both. A complex cytoskeleton, with the capacity to form membrane protrusions, hints at a novel way to make a living. Like Gaspar Jèkely (10), I like to imagine that the primordial microbial mats and biofilms offered a niche to primitive scavengers and predators that felt no need to compete with the prokaryotic primary producers; instead, they ate them. Sometimes—conceivably, just once—the prey evaded digestion and established residence. The host contributed the genetic core, the cytoskeleton, ATPases, and probably much else; the symbiont offered genes and a glorious future untrammeled by energy shortages. Many loose ends remain to be tucked in: Whence came signature genes found only in eukaryotes? How does the metabolism of eukaryotic cells relate to that of the hypothetical scavenger? Why is the lipid composition of eukaryotic plasma membranes akin to that of Bacteria rather than Archaea? Even so, it may be the case that we are watching the genesis of the Eukarya turn from a mystery into a puzzle.

For microbiologists preoccupied with practical matters, the begetting of the Eukarya will seem a nebulous subject best contemplated over a beer. But this arcane issue impinges on one of the conceptual foundations of microbiology, namely the tree of life with its three ancestral domains (Fig 1A). The narrative sketched above challenges that iconic image in two ways. First, if the lineage of the eukaryotic host branched off within the Archaea, is it still appropriate to consider it a separate, independent line? Well, that will depend on the precise relationship of the eukaryotic ancestor to the last common ancestor of Archaea, a matter unlikely ever to be unambiguously resolved. To me, the key point is that, from its inception, the eukaryotic branch seems to have operated on a distinctive pattern of organization; if any grouping rates the designation of domain, it’s the Eukarya. The second, and more serious concern, turns on the role of the symbiont. If symbionts came late into a pre-formed proto-eukaryotic host, to which they made only a minor contribution, the image of the tree remains apt. But if, as now appears, they came early and helped shape the very fabric of the eukaryotic cell, then the Eukarya are not a primary domain but a secondary, or derived one (Fig. 1B). Thus the most fitting image to hold in mind is not a tree, but a pointed Gothic arch thrusting out of the prokaryotic underbrush towards a higher plane of life. Viva Eukarya! 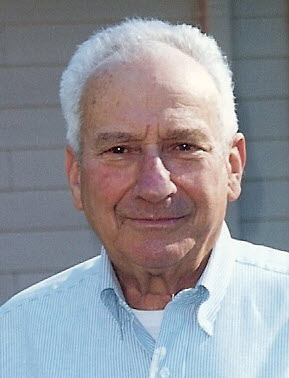