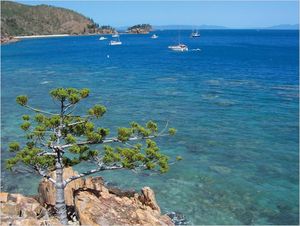 Queensland scenery. Although Q fever was first discovered in Queensland, Australia, the “Q” apparently stands for “query” and not for the name of the place. Source.

To the consternation of medical students and others who are obliged to learn such matters for exams, the number of special attributes that distinguish one pathogen from the others is colossal. But to those who are genuinely interested in the world of pathogens, each assortment of distinguishing properties holds its own fascination. Coxiella burnetii is a fine example of an agent rich in striking traits. This is a γ-proteobacterium, somewhat akin to Legionella, that causes a zoonotic disease, Q fever, which manifests as an acute influenza-like illness. It can also establish a chronic infection in immunocompromised individuals resulting in a potentially fatal endocarditis that is notoriously recalcitrant to antibiotics. C. burnetii is usually disseminated via contaminated aerosols and livestock workers are exposed to this pathogen while working with infected animals. A 2007-2009 outbreak of Q fever in Holland afflicted over 4,000 people and claimed 11 lives. This is a highly infectious agent that has been included in the list of possible candidates for bioterrorism. Clearly, we need to know more about this agent and how to control it. 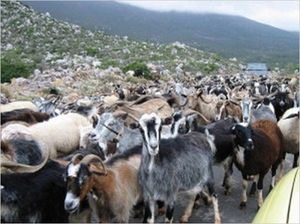 It had been thought that C. burnetii is confined to living within host cells—a strict intracellular parasite. In fact, it was recently cultured on it own, outside cells, thanks to sharp insights into its metabolism that allowed researchers to designspecial growth conditions. We dealt with this topic here, in a piece that bore the happy title Coxiella Escapes Cell!

Among its other special attributes, C. burnetii makes a somewhat unique spore-like resistant transit form, and—the topic of this article—it has evolved an unusual strategy for intracellular survival. The organismreplicates inside alveolar macrophages within a specialized phagosome-like structure that warrants a distinct name, the C. burnetii-Replicative Vacuole (CRV, also known as the parasitophorous vacuole). The CRV is remarkable for its huge size, sometimes occupying nearly the whole cell volume. Recall that lysosomes fuse with phagosomes to deliver enzymes toxic to pathogens, but the CRV delays this fusion, thus protecting the pathogen from the onslaught of these enzymes and allowing it to replicate repeatedly. For a discussion of this specialized structure, see a review. But, in addition to this particular skill, C. burnetii is an expert at hijacking various host signaling pathways to ensure its own survival and replication. 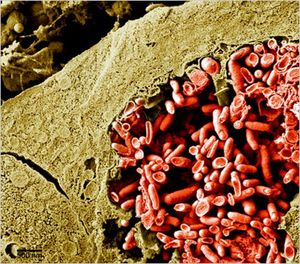 As is the case with other intracellular parasites, it’s in Coxiella’s interest to have the host cell remain intact for a long time. One way is to help the cell steer clear of destruction by apoptosis. Indeed, Coxiella accomplishes just that, by having several anti-apoptotic mechanisms in its armamentarium. One of them prevents the release of cytochrome c from mitochondria, which avoids the activation of the apoptosis-required “executioner” caspases. The organism has other anti-apoptotic mechanisms, which I will discuss here.

A recent study revealed that, during infection, the host’s anti-apoptotic kinases AKT and ERK 1/2 become activated by phosphorylation, which leads to inhibition of apoptosis. Antibiotics that block Coxiella transcription negate this effect, suggesting that the anti-apoptotic activity is indeed triggered by the bacteria. The coxiellas do this via a Type IV secretion system (T4SS) that translocates bacterial effector proteins into the host cytosol. The role of these kinases was confirmed by using inhibitors of the AKT kinase or an antagonist of the ERK 1/2 kinase. In the presence of these inhibitors, the infected cells died, presumably by apoptosis.

It gets more tangled. The anti-apoptotic activity of C. burnetii involves an interconnection between apoptosis and autophagy (the sequestration of damaged cell material and invading bacteria into vesicles that eventually fuse with lysosomes for destruction of the “cargo.” See a previous post). Although autophagy is usually at play in the destruction of intracellular pathogens, in the case of C. burnetii, it is actually required for the formation of the CRV. This organism directs the orchestration between autophagy and apoptosisvia the teamwork of two proteins, the autophagy-related Beclin 1 and the anti-apoptotic Bcl-2(please keep these two names apart – they are different but interacting proteins). A study shows that soon after infection, Beclin 1 is recruited to the membrane of the CRV, along with a protein that is a marker for autophagosomes, LC3. Transfecting infected cells with a plasmid that deletes endogenous Beclin 1 via a small interference RNA led to a significant decrease in vacuole number and size. 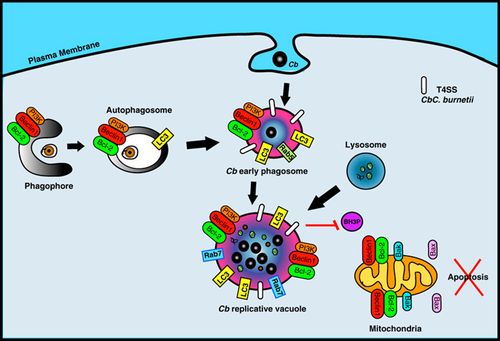 Modulation of the autophagy and apoptosis pathways by Coxiella burnetii (Cb). Cb is internalized into the host cell after a classical phagocytosis. Autophagy pathway is induced, probably through injected proteins through the Type IV Secretion System of Cb. Thus, the compartment containing Cb fuses with autophagosomes, acquiring autophagic key proteins, such as LC3, Rab24 and Beclin 1, which favor the generation of the large replicative vacuoles in which Cb survives and multiples. Moreover, Cb also establishes a persistent infection by means of inhibiting apoptosis in infected cells. This anti-apoptotic effect of Cb is due, at least in part, to the recruitment of the anti-apoptotic protein Bcl-2 to the membrane vacuole. In concert with Beclin 1, the binding of pro-apoptotic proteins (e.g. BH3-only proteins) to Bcl-2 is avoided and, therefore, the triggering of apoptosis is inhibited. Source.

The association of Beclin 1 with Bcl-2 has been known for some time but further details have emerged. At early time points after infection, it has been shown that a mutant Beclin 1 defective in its ability to bind to Bcl-2 still gets recruited to the CRV membrane, but only few cells become infected. After longer time periods, both the number and size of CRVs are reduced. This and other data suggest that a proper ratio of Beclin 1 and Bcl-2 is required for normal CRV development. What results from these transactions is the formation of a CRV in a cell able to avoid apoptotic destruction. Replication of the Coxiella is now assured.

And there is more. A recent report describes yet another host pathway manipulated by C. burnetii to prevent apoptosis. It had been known that there are quite a few host kinases involved In CRV formation, eleven in number. The paper focuses on one of them, PKA, a cAMP-dependent kinase. Pretreatment with two PKA-specific inhibitors before infection resulted in smaller CRVsand lower viable bacterial counts. Thus, PKA activity is required for optimal vacuole formation and thus bacterial replication. Levels of phosphorylated PKA were much higher in infected cells than in uninfected cells. Bad, a mitochondrial apoptotic protein that regulates the release of cytochrome c, was phosphorylated to a higher level in infected cells, thus also playing a role in preventing apoptosis.

One more addition to the story: as is the case with some other pathogens, actin is involved in the replication of C. burnetii. In infection, F-actin becomes rearranged and is recruited to the maturing CRV, a process required for the vacuole’s expansion. This activity is regulated by PKA. Two small GTPases, Rho A and Cdc42 that control actin assembly, are also recruited to the vacuole membrane shortly after infection. PKA has been shown to regulate the activities of both these kinases, which reinforces the role of PKA in polymerizing actin around the maturing vacuole.

C. burnetii is not alone in pilfering host signals to further its own ends. Several other intracellular bacterial pathogens are known to scavenge their host’s signaling machinery, e.g., Brucella suis, Mycobacterium tuberculosis, Helicobacter pylori, Neisseria gonorrheae, Legionella pneumophila, Salmonella enterica and Chlamydia trachomatis. These studies on Coxiella reinforce the idea that the manipulation of host signaling pathways is a major theme in bacterial pathogenesis. Such results reveal how signaling activities become manipulated in infected cells, thus exposing some of the tricks used by pathogens to disrupt normal cell functions. Each tactic that is uncovered provides us with one more potential strategy for preventing or curing bacterial diseases.