The Higgs Boson and Biology 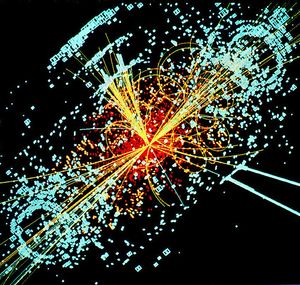 An example of simulated data modeled for the CMS particle detector on the Large Hadron Collider (LHC) at CERN. Here, following a collision of two protons, a Higgs boson is produced which decays into two jets of hadrons and two electrons. The lines represent the possible paths of particles produced by the proton-proton collision in the detector while the energy these particles deposit is shown in blue. Source.

I approached several physicists-some turned-biologists-to ask them for a brief comment on the topic: "In the long run, what will the discovery of the Higgs bosondo for biology?" Their answers span the extremes from “nothing” to “everything.”

Joe Incandela, Dept. of Physics, University of California at Santa Barbara (Joe was the head of the CMS team, one of the two groups that carried out the experiments at the CERN Large Hadron Collider that observed the Higgs boson)

The Higgs field is related to the state of the universe. Our universe is surprising in many respects because it appears to have a remarkable near-perfect balance of underlying characteristics that allows for everything we see to exist. We cannot yet explain this balance and it could be just random chance. With String Theory it is hoped that we can explain a lot about why the universe has the state that it has but it could turn out that there are in fact a huge number of possible universes, maybe all of them exist, and most of them by far do not come anywhere near to having the characteristics of our universe. So our universe could be the extremely rare exception that is balanced in this way and it is only in this balance that there can be life. The Higgs, which is a part of this picture, is then simply a byproduct of the fact that we are in the rare case of a universe where we can exist and ponder these questions. I think it is safe to say that we hope that we can eventually explain why the universe has the characteristics that it has and that it is not just random chance. Meanwhile, getting back to the Higgs...

Without a Higgs field (of which the Higgs bosons are the corresponding quanta) it is believed that none of the elementary particles would have mass. This does not mean that no particles would have mass because elementary particles could bind to one-another and in so doing create a massive particle. So for instance protons and neutrons which are made of 3 quarks could still exist but the electron would remain massless. The latter is of course of very great consequence because it means there would no longer be atoms and this of course means there would be no elements, no compounds, no structure of any kind, and so no life. So the simple relation of Higgs to biology is that without it there is no biology.

It has been many years since my student days when I naively thought that I would become a theoretical particle physicist. I reckon physicists' reaction to the news about the Higgs boson is like an excitement rather than a surprise. It's like filling one glaring hole in the periodic table with the element "X" that we know must exist—That is, if you believe in chemistry (or quantum mechanics).

I am not really sure how all this will do for biology. On the one hand, I am personally curious to know why biological systems are the way they are, and whether fundamental physical principles matter in my study. On the other hand, I hear this lingering voice of John Maynard-Smith in The Major Transitions in Evolution, "... This book is about how and why this complexity has increased in the course of evolution. The increase has been neither universal nor inevitable...."

I have three answers to the question.

The Higgs boson is an impressive discovery in fundamental science, but i don't think it will affect day-to-day Biology, Chemistry or even Physics very much.

Experimental particle physics has now burrowed down to length scales so incredibly small that its new scientific discoveries are largely insulated from what happens at length scales larger than an Angstrom, i.e., the size of an atom. Finding the Higgs boson is bit like completing the row of trans-uranium elements in the periodic table. Most of those exotic elements are quite unstable, and so is the Higgs Boson. According to the Economist Magazine, the last really "useful" particle discovered in high energy physics was the neutron in 1932!

Of course, judgments of this kind should be viewed with caution—perhaps the Higgs boson will lead to discoveries that shed light on profound cosmological questions such as the origin of dark matter or dark energy.

The original predictions about this Higgs boson were made in the 1960s, nearly 50 years ago. Such predictions are also a key part (to my understanding) of the so-called "standard model" of particle physics. There is a very deep lesson here. First, that the job of theorists is to make polarizing predictions about experiments that have not yet been done. I am strongly disturbed by the attitude of journals that insist on "data" to go along with theoretical predictions. In fact, the most exciting and interesting predictions are those for which there is no data. I just got a request to be a guest editor this morning and here is the last line: "While experimental validation is not necessarily required for publication, we do, however, seek substantial evidence for conclusions."

The Higgs boson story shows why that is so wrong. It is beautiful that over such a long period of time, a community could come together in their conviction that one should make bold predictions and then test them. Indeed, it always makes me wonder why the word "speculative" is so pejorative and thrown around as though it is a damning indictment of someone's science. So, to sum up, my belief is that forward progress in science depends largely on the interplay between bold, polarizing predictions and careful measurements specifically targeted to test those predictions. In a better world where all scientists saw themselves as part of a common cause to better understand nature, biology would take away inspiration from the kind of rich interplay between theory and experiment that is evidenced by the Higgs story. 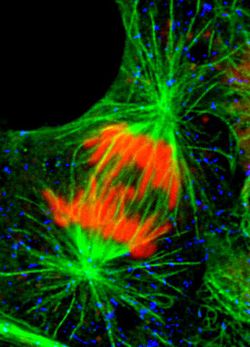