« Phee ɸ Phoh PhuZ: A Tale of Giant Phage with a Furtive Tubulin | Main | Begetting the Eukarya: An Unexpected Light »

Who Would Have Thought It? Which Would You Bet Are Easier to Cultivate, Abundant Bacterial Species or Rare Ones?

Surprises are the stuff of science, but some discoveries are more surprising than others. We are starting a new column, its aim being to highlight findings that, in our view, lie outside the norm for being markedly unexpected and unforeseen. We plan to post notices of such items periodically. You are invited to submit your own choices.

Although only a small fraction of the bacteria on Earth can be cultivated, the existence of many others has been inferred from the presence of their DNA in environmental samples. This two-fold approach sounds innocuous enough, but it has occasionally resulted in acrimonious controversies. This is puzzling because even a moment’s reflection should lead one to conclude that these strategies are complementary and that both are needed. But putting that aside, consider that bacterial species are far from uniformly abundant in the environment. Some are found in large numbers, others are exceedingly rare. Now, which do you think would be easier to culture, the abundant ones or the rare ones? If you bet on the abundant ones—surprise, surprise—you’d be wrong, even if your answer feels intuitively obvious. 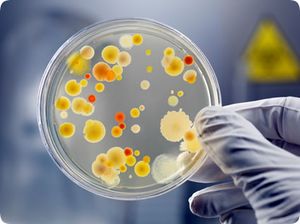 A plateful of cultivable bacteria. Source.

In the microbial world, the sparse species make up the “rare biosphere.” Click here for a report of a colloquium on this subject by the American Academy of Microbiology. If rare enough, organisms can escape detection by limited sequencing efforts. However, their importance must not be underestimated as they may act as a “seed” bank containing bacteria that might become much more abundant when conditions in that environment change. Microbiologists are conditioned to accept this outlook—we grow up knowing that a small inoculum may result in a large population. So, a simple question arises: are these rare species easier or harder to cultivate in the laboratory?

Members of the Handelsman lab took soil samples from eight locations in an apple orchard in Southern Wisconsin over a two-year period. They used both approaches—extracting the DNA for the 16S rRNA culture-independent analysis and culturing on a special medium that supports the growth of many soil bacteria. Surprisingly, 61% of those that grew in culture were from the rare biosphere and were not detected by the 16S rRNA analysis! Thus, standard sequencing efforts proved insufficient for their detection. In the words of the authors: …. a combination of culture-dependent and culture-independent analysis described the soil microbial community more comprehensively than either approach alone and uncovered members of the rare biosphere.

Number of OTUs (Operational Taxonomic Units, usually defined for bacteria as having 97% homology in their 16S rRNA) shared between culture-based and culture-independent analyses, and number of OTUs unique to each analysis. Source.

This result may not obtain with all microbiomes, at least not to this extent, but the conclusion matters sufficiently that the dual strategy of using both culturing and culture-independent method should become the norm in environmental studies. It used be thought that the main advantage of bringing bacteria into laboratory culture was that they could thereby be studied in greater detail. True enough, but it turns out that, for some species, cultivation is essential to establishing their very existence!

The authors add a gratifying thought: we may not be as ignorant about the soil rare biosphere as previously suspected. It is particularly appropriate that such a balanced view of how to study the microbial world comes from the lab of the one who in 1998 coined the term metagenome! And I think that this paper serves to lay to rest for all time the arguments about the primacy of one or another approach.

For a live discussion of this topic that includes Jo Handelsman, go to the podcast This Week in Microbiology, episode #38.