The American Society for Microbiology has designated the Cold Spring Harbor Laboratories on New York’s Long Island as a Milestone in Microbiology site. This is the ASM’s way of recognizing locations where important microbiological history was made. For previous sites so honored click here. Cold Spring Harbor has in fact been called the Mecca for molecular biology (read molecular microbiology, as initially the two were one and the same) and here's why. For a short video of the dedication ceremony, click here. 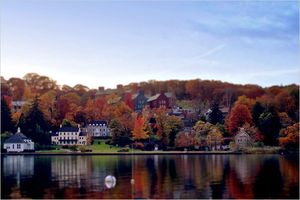 The Cold Spring Harbor Laboratories seen from the cove. Source.

The early days of molecular biology, say from the late 1940s until about 1965, had a magic quality that seems almost quaint now. The founders of this science were extraordinarily communicative and collegial. True, this was a time when abundant low-hanging fruits were ripe for the picking, plenty for all comers. But personal interests counted for little. Everybody told everybody else what they were doing, and as soon as possible. These being pre-internet days, they devised a new means of communication, the “preprint.” People habitually mimeographed (this being before copying machines) their papers at the same time they submitted them to a journal, and sent around copies for all to read.

These early molecular biologists, huddled around the T-phages of E. coli, had a great urge to get together. Every summer they assembled at Cold Spring Harbor. They would spend a week together, giving talks, endlessly scribbling on blackboards, telling each other with great intensity what they were doing and, with even greater intensity, what they thought of what everybody else was doing. The papers presented each summer were collected and published in the famous CSH Symposia on Quantitative Biology. One would have to go back to the early days of modern physics, or perhaps a few thousand years earlier to Plato's Academy, to find this same type of intense, open, interpersonal interaction where ideas were generated and freely shared. With an eye towards the future of their field, in 1945 the group organized a course on phage genetics that brought a steady stream of young investigators in to join the initiated. In time, the course morphed into one that included bacterial and archaeal genetics. 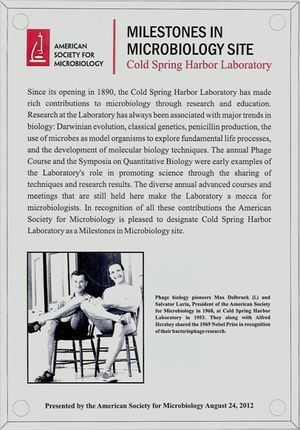 The ASM plaque to be installed at the Cold Spring Harbor Laboratory. The 1953 photo is of Max Delbruck (l) and Salvador Luria (r). Together with Al Hershey, they received the Nobel Prize in 1969.

As a graduate student, I had the good fortune to attend several of these gatherings in the 50’s. At one in 1953, I heard Jim Watson announce the structure of DNA for the first time in the US. I admit to my everlasting shame that I wasn't quite sure what the big fuss was about, being that, at a glance, a helix was just another shape. Only later did the double structure’s implications for DNA replication sink in. But I was certainly swept along by the excitement and know that being in attendance was a transformative experience. I treasured it then and I treasure the memories now. A vignette: Everybody gathered for lunch at outdoor tables. On one occasion, no sooner had I set down my tray that one of the great figures in molecular biology, Leo Szilard, came and sat next to me. He turned to me and said, “Well, young man, are you doing something important?” And another vignette: I was invited to give a talk at one of the symposia. To my chagrin, it elicited no questions from the audience. The convener, taking pity on me, turned to Salvador Luria and asked him to comment. Now Luria had neither much interest in bacterial growth physiology, the subject of my report, nor, like most of the other notables, did he bother with niceties. He said, "Nice system!" Was there ever fainter praise?

The celebration of the ASM event was held in conjunction with a yearly course, Bacteria, Archaea, and Phages. Stanley Maloy, a former ASM president, unveiled the plaque and gave one of several celebratory speeches. Also there for the occasion was Podcast Master Vincent Racaniello who, along with Maloy, met with Waclaw Szybalski (one of the distinguished figures of the old days) and John Kirby to reminisce about how this site had advanced the science and teaching of microbiology. Their discussion was recorded as episode #40 of This Week in Microbiology.

All who were active in those heady days of our science were greatly influenced by the goings-on at Cold Spring Harbor. This celebration is an occasion for them to savor the memories and for all to reflect on the glory days of the founding of modern Biology.