Faster than a Speeding Bolt: Mycoplasma Walk This Way

(With a nod to Aerosmith)

by by Daniel P. Haeusser

Many prokaryotes move actively in liquid (swim) or on moist solid surfaces (swarm and glide) to­ward or away from a stimulus, such as a nutrient, light, or oxygen. Not surprisingly, prokaryotes have evolved numerous means of locomotion built around distinct molecular mechanisms. 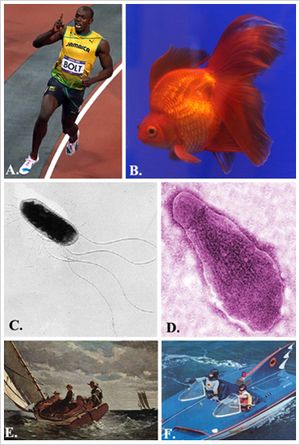 The motility of all animals, such as a hu­man like Usain Bolt (A) or a goldfish (B) is based on the actin and myosin protein machinery. Many bacteria utilize comple­tely different systems to achieve motility, such as the flagella in E. coli (C) or the unique ‘walking’ of M. mobile (D). These different motility systems are akin to various ways to make similar-looking boats move through the water, such as by the sails in Winslow Homer’s Breezing Up (A Fair Wind) (E) or the internal-com­bustion engine of the Batboat (F).

How distinct? A human running, a dog walking, an eagle flying, a fish swimming, a frog hopping, and a starfish crawling are each unique, but all share a root mechanism in the molecular properties of actin and myosin in muscle cells. For prokaryotes however, their movements don’t just look different; they often evolved from disparate mo­lecular systems or organelles unique to a particular gen­us or even species . Some of the more-studied mecha­nisms of prokaryotic motility are flagellar-based swim­ming and swarming, type-IV pilus twitching motility, and the ‘adventurous’ motility of Myxococcus xanthus. This adventurous motility relies on both secreted polysac­cha­ride and a helical motor that produces tread-like protru­sions along the cell surface.

Among the handful of other known prokaryotic motility mechanisms are those employed by the Mycoplasma, a genus in the class Mollicutes of the low G+C Gram-posi­tive bacteria (Firmicutes). (Video of Mycoplasma motility) The Mollicutes share several defining characteristics, most obviously the lack of cell wall that gives them their name (mollis is Latin for ‘soft’ or ‘pliable’). Therefore, al­though they phylogenetically fall in the Firmicutes, the Mollicutes have no cell wall for the Gram stain and are not susceptible to the antibiotics that target bacterial cell wall synthesis. In addition, the Mollicutes are some of the smallest cells known at 0.2 – 0.3 μm in length. Although they can be grown independently, these bacteria are often closely associated with host organisms, allowing the bacteria to attain drastically reduced genome sizes (The ~500,000 kilobases of M. genitalium is the lower limit for forming colonies on agar).

Recently featured in the news and here for its role in the synthetic biology research of the J. Craig Venter Institute, Mycoplasma also has played an important role in pathogenesis in livestock (M. mycoides) and in humans (M. pneumoniae and M. genitalium). They are also a frequent contami­nation of laboratory eukaryotic cell cultures, a significant risk for inducing data artifacts in cell cultures. Together, these traits make Mycoplasma a fascinating subject for study in a variety of fields. In particular, the mysterious motility observed for species of the M. pneumoniae cluster has inspired enthralling research that begins to illuminate novel mechanisms of prokaryotic motility.

It’s first worth getting a sense of how fast these microbes are moving (with a nod to the wonderful series of “Microbial Olympics” essays to which our own Merry Youle contributed. If you’ve witnes­sed bacterial motility under a microscope, you’re perhaps most familiar with flagellar-mediated E. coli swimming, which generates speeds of ~10 – 35 mm/sec. This translates to a top burst speed of ~17.5 ‘body’ lengths (bl)/sec. To put this into perspective (based on numbers here), the world’s fastest fish, the sunfish, clocks in at a staggering speed of 90 bl/sec, a goldfish manages a healthy 4.5 bl/sec, and US Olympian Michael Phelps achieves a meager 1 bl/sec. Of the motile Mycoplas­ma, the swiftest known is the aptly named M. mobile, a presumed pathogenic resident of gills in freshwater fish. Discovered in the late 1970’s, M. mobile has been studied as a potential biomotor with gliding speeds of 2 – 7 mm/sec. Considering their small size (~0.7 mm) this gives a top burst speed of ~10 bl/sec. This M. mobile gliding is about half as fast as E. coli swimming, but still quite respectable. Indeed, it is double the sprinting speed of world-record-holding, Jamaican Olympian Usain Bolt (5.3 bl/sec.)! 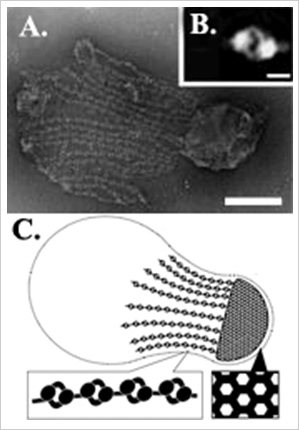 (A) When treated with Triton X-100 deter­gent to permeabilize the cell membrane, M. mobile leaves behind a 'ghost cyto­skeleton visualized by negative-stain elec­tron microscopy. It resembles a 'jellyfish' composed of two distinct regions, a 'bell' and 'tentacles'. Scale bar = 200 nm. (B) Averaged composite image of 'jellyfish' particles. Scale bar = 10 nm. (C) Cartoon of the different cytoskeletal structures between the 'bell' and 'tentacles'. Source: Image with modification.

So then, M. mobile gets around. How does it do it? Myco­plasma species lack flagella, pili, or homologs to any known motility system, prokaryotic or eukaryotic. It turns out that their motility is closely related to their shape – again, form fits function. Species in the M. pneumoniae cluster (includ­ing M. mobile) have a light-bulb shaped morphology con­sisting of a body and a polar membrane protrusion (head) called the attachment or terminal organelle. The cells glide unidirectionally, leading with this head in an asymmetry that allows attachment to surfaces by the terminal organ­elle and that has implications in division.

Beneath this bulb-shaped morphology lies a complex cyto­skeleton. When exposed to the detergent Triton X-100 to permeabilize the cell membranes, M. motile cells leave be­hind a 'ghost' consisting of an insoluble cytoskeleton that resembles a 'jellyfish', with a lattice-like 'bell' in the head and 'tentacles' that extend from the base ('neck') of the terminal organelle into the cell body. Interestingly, gliding deficient mutants had discontinuous and significantly re­duced tentacles compared to wild type cells. So what is this cytoskeleton made of? While some Mycoplasma encode known prokaryotic cytoskeletal elements such as FtsZ and MreB, these are absent in M. mobile. Instead, researchers identified a set of at least ten unique proteins as making up the M. motile cytoskeleton structure.

To identify the proteins involved in gliding, researchers compared the protein expression profiles of wild-type cells and gliding-deficient mutants. They also made antibodies that specifically inhib­ited M. mobile gliding and used these to localize the target proteins. Three of the four identified proteins are found in the neck portion of the cell surface, corresponding to the region where the tentacle portion of the internal cytoskeleton resides. Antibody-mediated inhibition of single gliding proteins coupled with structural studies using conventional and atomic force electron microscopy led to a model where the gliding proteins form a leg-like structure extending from inside the cell (associated in some way with the cytoskeleton components) to a ‘foot’ that interacts with surface substrates. In this way, M. mobile is able to ‘walk’ across surfaces and manifest its visible gliding motility. In the centipede model of M. mobile motility, the gliding proteins extend from the inside of the cell, where they are linked to the 'tentacles' of the cytoskeleton, to those on the cell surface. ATP hydrolysis by P42 initiates a flow of conformational changes in gliding proteins (i–iv) that translates into a step-wise cellular 'walking' through re­peated binding/release of surface substrate by the 'legs/ feet'. Source: Image with modification.

At this point you may wonder how this walk­ing is powered. Recall that three of the four identified gliding proteins localize to the neck of M. motile. The fourth gliding protein, P42, has not been localized, but it is a puta­tive ATPase that has ATP hydrolysis activity when expressed in recombinant E. coli. Fur­thermore, ATP is required for M. mobile mo­tility and addition of ATP amazingly restored motility to the Triton X-100 insoluble M. mo­tile 'ghosts' (video here). This, and further da­­ta, have led to the 'centipede' model, where cycles of ATP binding, hydrolysis, and release by P42 lead to conformational chan­ges in the three structural gliding pro­teins and subsequent binding and release from surface substrate. A recent publication fur­ther characterized the physics of these mo­vements using cells elongated by low detergent concentrations. 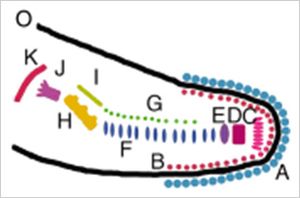 Schematic of the motility system compo­nents within the ‘head’ (attachment or­ganelle) of M. pneumoniae . Letters refer to panels in original source. In the ‘inch­worm’ model of motility, conformational changes in the electron dense core of the cytoplasm (xtending from C–K) are trans­­mitted through a cytoplasmic anchor (B) to surface adhesion proteins (A) to achi­eve forward movement. Source.

Surprisingly, this molecular system of motility appears specific for M. mobile. The gliding proteins of M. mobile are found in the closely related M. pulmonis, but no­where else known. Researchers have studied the motility of M. pneumoniae for decades longer than M. motile and, while the overall cell morphology and means of locomotion appear conserved between the two species, the cytoskeletal structure of M. pneumoniae (and that of the related M. gallisepticum) is distinct from that of M. mobile, with a completely different set of gliding proteins that has led to the 'inchworm' model of Mycoplasma mo­tility. This suggests separate evolution of distinct motility systems (‘centipede’ vs. ‘inchworm’ models) in different Mycoplasma species (M. motile vs. M. pneumoniae, re­spec­tively).

Considering their close association (and at times dependence) on host species and their reduced genomes did the ancestral Mycoplasma lose their motility only to regain similar systems indepen­dently? Were they immotile bacteria that found a need for motility once beholden to host? Do the cytoskeletal and gliding proteins of these species perform other functions that have been coopt­ed? How are these cytoskeletal and motility systems kept organized through the process of cell division? A host of questions remains for these fascinating and deceptively simple organisms sprinting about their hosts.

Note: Go here for additional videos of Mycoplasma motility from the Miyata Lab.

Moselio Schaechter on October 08, 2012 at 04:00 AM in Physiology & Genetics, Teachers Corner | Permalink