« Who Would Have Thought It? Bacterial Cannonballs! | Main | A Kick in the Midgut » 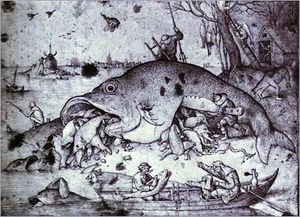 Big fish eat little fish, and so on, the ultimate “so on” being the microbes, which are typically placed at the bottom of the food web. In the oceans, bacteria are commonly set upon by protists, in soils also by nematodes and other small animals. And everywhere, there lurk virulent phages and even bacteriovorus bacteria. Add to the list a form of bacterial predation aptly called cannibalism, where a species attacks and destroys a close relative. With all these threats, microbes in nature continually face a perilous future. Predation is a broad term encompassing many kinds of interactions that take parasitism to the extreme—one party eating and the other being eaten. Our sympathy is often with the prey (the sheep being eaten by the wolf). On the other hand, we use a gentler term for the gobbling-up of prey, “grazing,” which brings to mind sheep pastorally nibbling on grass in a meadow and makes it easier for us to look kindly upon the predator. 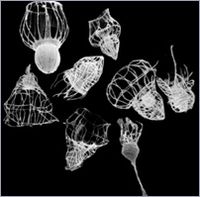 Heterotrophic nanoflagellates such as these are major consumers of bacteria in the polar regions and contribute significantly to the carbon flux from dissolved organic carbon (DOC) via bacteria to larger organisms such as ciliates and metazoans. Source.

Ubiquitous as it is, predation influences the population structure of both prey and predator in multiple ways and on a large scale. More often than not, the predator becomes the prey and vice versa. These complex goings-on are central to the cycling of matter and energy on Earth. Predation, being everywhere, is hard to overlook. But despite it having such a key role, in microbial conversation predation often plays second fiddle to such glitzy subjects as intermicrobial communication or symbiosis (sensu mutualism). Mind you, it’s all part of one puzzle, but what you call the parts of the puzzle matters. I was prompted to voice these concerns by a recent review by Alexandre Jousset, which I found illuminating. It deals mainly with the ways microbes avoid being prey. (I should note that a current review about the other half, the ways the predators carry out their job, seems also called for).

What’s so fascinating about this subject are the many adaptive strategies organisms have evolved to face their threats. Bacteria, for example, possess innumerable mechanisms to avoid being eaten by protists, which is the main focus of the review. Broadly speaking, these strategies deal either with deterrence or with survival once ingested. Sounds familiar? These are the same strategies used by bacterial pathogens when confronted by phagocytic cells as they try to colonize a vertebrate host. It’s worth noting that phagocytosis is not usually called predation, yet it makes sense to say that pathogens face “predation by white blood cells.” Thinking about phagocytosis as predatory behavior helps us remember that this key step in pathogenesis is nothing new. Pathogenic microbes learned their trade from ancestors that faced being “grazed upon” by flagellates and amoebas eons ago. 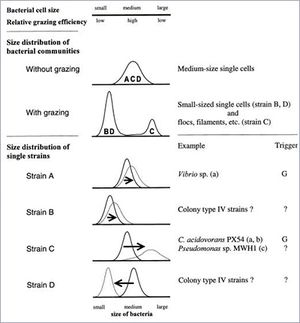 Predation selects for the size of the prey. Here, the influence of grazing by the bacteriovorus nanoflagellate Ochromonas on the structure of a complex bacterial community was studied in chemostat experiments. Shown is the interplay of size-selective grazing, bacterial cell size, morphological, and taxonomic structure of the bacterial communities. Depicted is the size distribution of single bacterial species and the grazing-influenced changes in their size distributions (dotted curves). The arrows indicate the direction and strength of induced changes. Source.

Predation has forceful evolutionary consequences on both predator and prey. Here’s an example: a microbe can avoid being eaten by becoming too large a particle to be ingested by small predators. One way to achieve this is by aggregating into large colonial clumps. Although oversimplified—life is more complex—this suggests a possible early step in the evolution of multicellularity. Many, if not most, of the diverse shapes and forms found among the bacteria were likely selected for their survival value in a predatory world. Predation is and will continue to be a major force in biological selection. What all has evolved as the consequence of predation?

In natural environments, the organisms that prey on microbes are often picky eaters. Not every potential prey gets gobbled up with equal gusto. As a result, predation alters the numbers and kinds of both prey and predators. What happens on a microscopic scale is not much different from what takes place in the African plain where lions stalk zebras or in the Amazon, where an anaconda swallows a capybara. All these are complex situations that lend themselves to extensive mathematical modeling and, sure enough, an ample literature exists on this subject (for examples, click here and here). As discussed in these pages by Joe Mahaffy, predation is of special interest to biomathematicians. 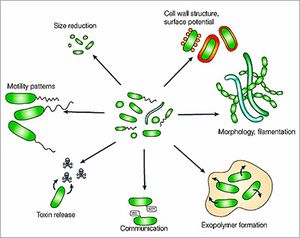 Phenotypic properties of aquatic bacteria that might provide protection from predation by heterotrophic protists. Source.

I voice my concern that the topic of predation in the microbial world has not consistently received the attention it deserves. I say this because rarely do I encounter discussion of predation in the literature or at conferences, nor have I ever seen a chapter devoted to this subject in a general microbiology textbook, including some I have co-written. To my knowledge, there have been few if any sessions on predation at the annual ASM General Meeting (please tell me if I’m wrong). Granted, predation does have its aficionados, and a significant literature is readily available. But overall, and more to the point, the subject does not pierce the consciousness of microbiologists as often as it warrants. So much in microbiology—both form and function—makes more sense when viewed in the light of predation.