« The Tyranny of Phylogeny: An Exhortation | Main | The Colors of the Microbial Rainbow » 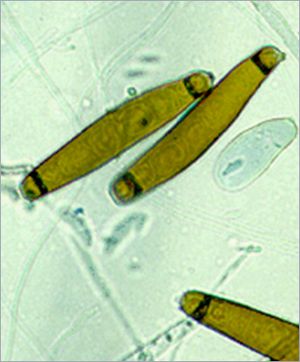 We seldom post items of immediacy, but here we interrupt our leisurely ways to write about the current disastrous meningitis outbreak caused by the injection of fungus-contaminated steroids and other drugs. As microbiologists, the question comes to mind at once: Who is the pathogen? The fungus implicated is Exserohilum rostratum (although a couple of cases were due to the more familiar Aspergillus fumigatus and to a Cladosporium). Like many good fungi, E. rostratum has a couple of synonyms: Setosphaeria rostrata and Helminthosporium rostratum. If you never heard of them, you’re in good company. Neither had an expert on fungal infections who I asked, nor had I despite occasional dealings with fungi. The reason is that there are lots of species of such molds, many of which cause exceedingly rare human diseases.

E. rostratum is one of the dematiaceous or darkly pigmented molds that is found in soil, on plants and in stagnant water. Like many molds, it can be identified under the microscope by the morphology of its conidia (asexual spores), which are quite distinctive. The rare human infections it causes are typically of external body sites, e.g., the skin, cornea. Being common in the environment, it is likely that it contaminated the injectable medications before they were packaged.

Most environmental fungi prefer to grow at temperatures below that of the human body. E. rostratum, like A. fumigatus, may be an exception. Nothing is yet known about what happened after the injection with a contaminated solution. Several weeks passed before symptoms of meningitis appeared. This may be the time required for the mold to enter into the meninges (the injection is delivered outside the dura mater, the outer layer of the meninges).

While the media focuses on how the injectable solutions got contaminated, microbiologists may well be intrigued by the ways the fungus wreaks havoc once there. More on this story is apt to be forthcoming in the months ahead.