What if I told you that engineering a single protein into E. coli is sufficient to make it fill up with membrane-bound vesicles? Would you send me to the couch or to a padded cell? Not so fast, as this is precisely what a group of sixteen investigators from three continents have recently shown by expressing caveolin-1 in E. coli. Caveolin-1 is the main protein involved in the formation of mammalian membrane structures called caveolae. The consequences were amazing.

The main features of caveolae and caveolins. a caveolae in adipocytes are seen as discrete flask-shaped pits. Note their incredible abundance. d shows how caveolin is inserted into the caveolar membrane, with the N and C termini facing the cytoplasm and a putative 'hairpin' intra­mem­brane domain embedded within the membrane bilayer. The scaffolding domain, a highly conserved region of caveolin, might have a role in cholesterol interactions through conserved basic (+) and bulky hydro­phobic residues (red circles). Source.

So just what are caveolae? As their name, Latin for small caves, implies, they are flask-shaped pits in the cell mem­brane. Here considerable busi­ness is transacted, in­clud­ing the formation of endo­cytic vesicles and some aspects of cell signaling and lipid metabol­ism. They are the sites where some bacteria and viruses first attach prior to entering the cell. No wonder this sets the heart of animal cell biologists racing.

The E. coli used in these experiments performed spectacularly, beyond any researchers dreams. They made bilayer-bound caveolae-like structures that match in key ways the caveolae in animal cells. In fact, they made so many that within a few hours the cells became utterly filled with these vesicles – wall-to-wall caveolae. In our correspondence, the lead author let me know that the gene construct consisted of just the caveolin-1 gene (plus some fusion proteins for ease of manipu­la­tion). Thus, this protein alone plus some of E. coli's own lipids is sufficient to induce vesicle forma­tion in E. coli. The early stages of formation of these "bacterial caveolae" correspond well to what is seen in animal cells: the cytoplasmic membrane bulges inward and the bulges eventually pinch off to form independent intracellular vesicles. All this appears to happen without further help. When cloned, neither of the two other caveolin proteins do that.

The experiments were straightforward. The researchers introduced the caveolin-1 gene (or those genes for other caveolins in further studies) into a standard plasmid expression vector, which was then used to transform E. coli. To facilitate purification of the protein, this gene had been fused to the one for the maltose-binding protein. The fusion protein was expressed constitutively from the strong T7 RNA polymerase promoter. Cultures of the construct grew vigorously to high overnight cell densities, the same as cells carrying an empty plasmid. By this time the cells were literally filled with the vesicles. Other than that, little is known as yet about how this affects the bacteria. 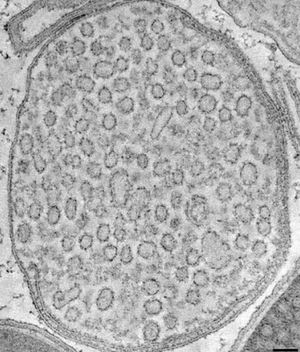 The caveolae were purified by treating the bacteria with lysozyme and sonication (being small, the caveolae are likely to be more resistant to sonication than the cell membranes), and their proteins were analyzed after affinity chromatography. The researchers recovered abundant caveolin-1, whereas the amount of regular membrane proteins was below the level of detection. In other words, to repeat myself, the vesicles are made from one membrane protein only, caveolin-1 (although periplasmic constituents ought to be found within). Im­munogold staining located caveolin-1 on the surface of the purified vesicles.

Looking more closely, a tomographic reconstruction showed that the recombinant caveolae contained some 160 molecules of caveolin-1, similar to the number in the mammalian caveolae. For those interested in the organi­zation of the protein in the structures, this paper provides considerable molecular detail. As to the lipid components of these membranes, a detailed mass spec analysis, including the length of their fatty acids, showed significant differences in the lipids of cells before and after induction of caveo­lae formation. The caveolae contain more lysophospholipids with fewer shorter chain fatty acids and less phosphatidylethanolamine – changes known to facilitate greater membrane curvature. There is quite a literature on caveolar organization and this paper contributes interesting possibi­lities by the use of an easier-to-manipulate experimental system. This work with E. coli provides a manipulable model system that may make it easier to address many of the questions that remain unanswered. Although there is already quite a literature on caveolar organization, many questions remain unanswered. 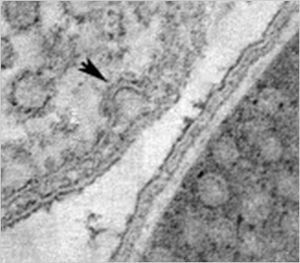 Caveolae in the making. Ultrathin section of E. coli showing a caveola bulging inwards from the cytoplasmic membrane (arrowhead). Note the abundance of caveolae in the adjacent cell. Source.

Next, these researchers asked if it’s possible to introduce foreign constituents into the E. coli's caveolae. After in­cubating the constructs with fluorescent membrane-staining dyes that can cross the outer but not the inner membrane of Gram-negative cells, they saw lots of fluorescence within the caveolae. So yes, the caveolae contain material from the periplasm. And that material can include proteins, as demonstrated by recovering from the vesicles an enzymatically active horseradish peroxidase that they delivered into the periplasm by disrupting the outer membrane. One could call this process endocytosis-like. Something similar has been reported only once in bacteria, to wit in the somewhat enigmatic Planctomycetes.

Considering what we know about bacteria, this filling up of bacterial cells with extraneous vesicles is simply startling. I know of no precedent. What this tells us about the plasticity of bacterial cells remains to be seen, but it sounds like there is quite a message here. Few details on the bacteria themselves are available as yet, leaving the door wide open for microbiologists to get involved. Some surely will. Questions arising include: For how long can E. coli do this and survive? Which, if any, cellular processes does caveolae formation interfere with? What accounts for such a copious production of a single protein (to the tune of Mussorgsky’s Sorcerer Apprentice?). And how are the synthesis of the protein and specific lipids connected? Time-course experiments monitoring gene expression, protein synthesis, and lipid production following induction could help explain how E. coli manages this prolific production of caveolin constituents. The list of questions goes on and on. You are invited to contribute to it. 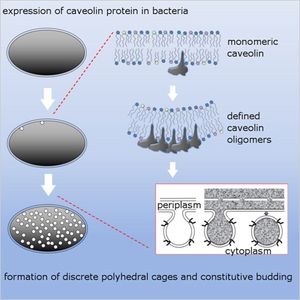 A schematic drawing of caveolaegenesis in E. coli. Source.

That this system may be of use in biotechnology is also exciting. Consider the possibilities for drug delivery of­fered by encapsulation of small molecules and proteins introduced into the periplasm. In another proof-of-prin­ciple step, these researchers showed that caveolae con­taining GFP and an immunoglobulin-binding domain from staph Protein A not only became bound to human breast cancer cells carrying an antibody on their surface but appeared to become internalized. Being that the caveolin-1 protein can be tampered with significantly without loss of function, one can envisage making fusion proteins targeted to specific cells. It appears that this could become a formidable tool for cancer chemothe­ra­py and for other conditions that may be ameliorated by the targeting of specific proteins. Sounds relatively simple and straightforward. And keep in mind that the caveolin-1 molecule is of human origin. So, will this prove to be a therapeutic breakthrough? Time will tell. But this is certain: our perception of what can be fitted into a bacterial cell has changed. If indeed E. coli is only one protein away from endocytosis, perhaps this work will compel us to cross endocytosis off the list of physiolo­gical traits that are exclusive attributes of the eukaryotic cell plan.

Interesting post and article Elio, this type of work also seems to hint at the fact that lipid rafts or a bacterial homolog may be present in bacterial lipid membranes. Given that certain bacteria are known to produce unique lipids such as PUFA's it wouldn't surprise me to see that production of unique lipids(PUFAs for example) is site directed and that certain proteins are found localized to these raft like regions just as in eukaryotic cells.