« Fungal Meningitis Bulletin | Main | A Whiff of Taxonomy The Acidobacteria »

The Colors of the Microbial Rainbow 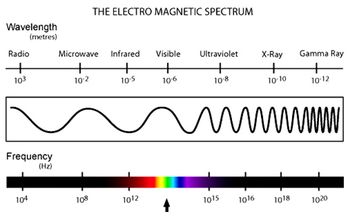 The only part of the electromagnetic spectrum that is visible to the human eye is in the narrow region between 390 and 750 nm, which contains all the colors of the rainbow and is referred to as the visible or vis light spectrum (vertical arrow at the bottom). Source.

Our appreciation of the colors of nature is limited by the narrow wavelengths of the electromagnetic spectrum that our eyes can detect. This portion of the electromagnetic spectrum between 390 and 750 nm is what we refer to as the visible (vis) light or, simply, light.  We cannot see below (ultraviolet light) or above (infrared light) these wavelengths. Yet this narrow margin of detection allows us to see all the colors of the rainbow, spreading across the visible spectrum from violet (shortest wavelength) to red (longest wavelength). You can see the color palette of visible light in the rainbow up in the sky on a rainy day, as light is dispersed by water droplets. You can also reveal the full color of the visible spectrum using a glass prism: the change of speed of the light as it crosses the glass medium changes the direction of the light waves and enables their dispersion.

Some natural surfaces can produce even more complex optical effects than rain droplets or a glass prism by selectively reflecting light of specific wavelengths and, therefore, specific colors. One optical effect, in particular, the one called iridescence, produces some of the most intense colorations in nature such as the rainbow-like coloration of soap bubbles, the inside of some shells, and the bright colors of the exoskeleton of some insects. The word iridescence originates from the Greek iris, which means ‘rainbow’, and refers to the optical property of some surfaces to change color and its intensity with the illumination or the viewing angle. Iridescent surfaces are uniquely structured in a way that causes the reflected light waves to interact physically with each other. The crests and troughs of the reflected light waves sometimes align (they are ‘in phase’) and reinforce each other, thus increasing the intensity of the reflected color. By contrast, if the reflected light waves are out of phase, they can cancel each other out and those particular colors never manifest. The final effect of this optical interference is the production of one or more predominant colors, the type and intensity changing with the angle of illumination and/or observation. Thus, iridescent colors are ‘structural’: they do not result from pigmentation but from physical interactions between light and surfaces. 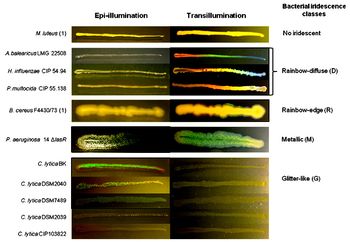 Some examples of bacterial iridescence in linear streaks of colonies examined with epi- and trans-illumination. The predominant coloration of the colony streak was used to define iridescence categories: rainbow (diffuse (D) or edge (R), depending on the location of the rainbow colors along the colony or on the edge); metallic (silvery luster (M)); and glitter-like (mid green and red and violet at the edges of the colony (G)). Source.

Although iridescence is a widespread phenomenon in nature, I was genuinely surprised to read a recent paper by Eric Rosenfeld’s group published in Applied and Environmental Microbiology reporting that several bacteria, including some well-known laboratory strains of Pseudomonas aeruginosa and Haemophilus influenzae, are iridescent. The paper begins with a  fine introduction about what is known in the field. Bacterial iridescence was first reported in 1904 but has been loosely and poorly described thereafter. Many reports used (or misused) epithets such as “shine,” “sheen,” “glistening”, “metallic effect,” “bright”, “luster,” “glow,” “glisten,” or “rainbow-like” For example, the authors showed that the ‘metallic iridescence’ previously reported for some strains of P. aeruginosa is not angle-dependent. Thus, these colonies are not truly iridescent. In some cases, fluorescence was mistaken as iridescence. I must admit that I have used some of these terms loosely in the past, blissfully ignorant of what I was observing.The researchers unified these epithets employing a rigorous classification of bacterial iridescence by using two microscopic techniques: epi-illumination (where illumination and detection take place on the same side of the sample) and trans-illumination (which detects the light transmitted through the sample). They investigated and described in detail the iridescent properties of colonies of several strains, including an iridescent strain (strain BK) of the marine bacterium Cellulophaga lytica (formerly known as Cytophaga lytica). This strain was isolated from the surface of a red anemone and grew into colonies displaying a glitter-like green coloration under direct epi-illumination. Other strains of C. lytica available in pure culture, including the only sequenced strain of the group (DSM7489), were either non-iridescent or exhibited low-intensity iridescence. In fact, the intense green iridescence displayed by C. lytica strain BK is described by the authors as ‘unmatched in the bacterial kingdom’ and to rival that observed in some insects and vertebrates. 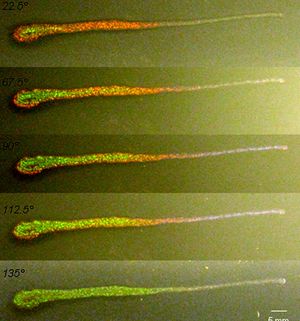 Linear streaks (approximately 5-cm long) of C. lytica strain BK grown on marine agar (a type of rich medium) display green iridescence in the middle and red and violet in the edges. The type and intensity of the coloration depends on the angle of illumination (22.5o to 135o, from top to bottom).

Interestingly, the iridescent coloration of the C. lytica isolate was responsive to the growth medium. Linear colony streaks grown on rich media are yellow to the naked eye but display glitter-like green coloration in the middle and red and violet on the colony edges under epi-illumination. The glitter-like colors are clearly iridescent, as they change in type and intensity with the angle of illumination. When grown in a low nutrient medium (medium LN), the colonies are translucent, thus void of any pigmentary color, and display the bright green iridescence when illuminated. You can actually watch a movie showing the dynamic changes of the iridescent green coloration in the translucent colony as the angle of illumination changes. In a follow-up paper, the researchers provide evidence linking iridescence to cold temperature, salinity and conditions of hydric stress (low moisture), which are all factors these bacteria encounter in their natural coastal shore environment. I cannot help but to mentally visualize the striking contrast of the green iridescence of this bacterium against the red anemone from which it was originally isolated. Anemones use their colors to attract fish, either to eat them or to establish mutualistic relationships (remember the movie ‘Finding Nemo’? Nemo and his dad are clownfish living inside an anemone!). The coloration also helps deter predators. The angle-dependence of the bacteria iridescent colors may enhance the coloration effects of the anemone and affect the behavior of preys and predators. The anemone, on the other hand, provides the bacteria with a rich nutrient environment, similar to the mutualistic relationship between the clownfish and anemones.

Besides its ecological role, it is important to understand what biological mechanisms control bacterial iridescence. Natural iridescent surfaces are highly ordered structures composed of very thin films or layers. The iridescence properties of the exoskeleton of some beetles result, for example, from the periodic arrangement of layers of the exoskeleton’s structural polymer, chitin, within air spaces. In some cases, iridescent surfaces are composed of periodically organized nanostructures, whose arrangement reflects part of the incident light at different angles. The material of peacock feathers, for example, is a two-dimensional lattice of periodically ordered melanin rods within air spaces. The feather material is actually colorless and almost transparent, but the interaction of light waves as they are reflected by the melanin lattice produces structural colors and gives the feathers their bright coloration. Changing the spacing of the rods in the lattice affects the reflection of the light waves and their interactions and changes the final color that is reflected from the structure. 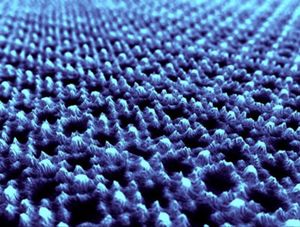 Scanning force micrograph of an S-layer with square lattice symmetry. The center-to-center spacing is 13.1 nm. Source.

In their paper, Rosenfeld’s team proposes that some mechanism of intercellular communication regulates the periodic assembly of cells within colonies or biofilms so as to produce an optically active cell assemblage that reflects light as iridescent colors. In fact, the researchers observed a link between cell density and the type of iridescent colors of the colony. However, I failed to appreciate any periodic pattern of organization in the micrographs they showed of cells within the iridescent colonies. One alternative explanation could be that the cells produce nanostructures in periodic arrangements such that scatter light in a coherent manner and with tunable spectral characteristics. Microorganisms are after all masters of nanoassembly. Notice for example the exquisite periodic arrangement of the S layer that envelops some bacterial and archaeal cells and functions as structural support, adhesin, and permeability barrier. The S layer is a symmetric two-dimensional lattice formed by the periodic arrangement of a single protein or glycoprotein. The type of protein determines the thickness of the S layer, its pore size and symmetry (oblique, square or hexagonal) Similar periodic nanostructures could also be responsible for bacterial iridescence.

The implications of understanding the mechanisms for iridiscence are far-reached. Although there is clearly a light scattering effect, the physical mechanism behind iridescence is still not fully understood. Evidence to date suggests that several optical phenomena act together to select for the reflection of only particular light wavelengths, therefore producing specific colors. These studies are difficult to carry out in animals or inert surfaces but could be easier in bacteria. Knowledge of how bacterial iridescent structures assemble and the mechanism(s) controlling their optical effects could enable the synthesis of biomimetic materials with controlled optical properties for the development of optical coatings, paints, cosmetics and anti-counterfeiting devices, just to mention a few applications. The field is generally known as biophotonics. The fact that bacteria have evolved mechanisms for iridescence could provide new materials and/or designs for the development of biophotonic devices at a fraction of the cost. It dawned on me that we may have just begun to appreciate the colors of the microbial rainbow … and the outlook could not be brighter.

Gemma is associate professor in the Department of Microbiology and Molecular Genetics, Michigan State University.