Who Would Have Thought It? Bacterial Cannonballs!

Surprises are the stuff of science, but some discoveries are more surprising than others. This column is where I’ll share some findings that strike me as most unexpected.

Biomineralization has long been recognized as an important albeit not always appreciated process in microbiology. Too bad, because microbes have literally made mountains. They have formed huge rock deposits, such as the celebrated White Cliffs of Dover, these being the accumulation of calcium carbonate shells of the alga, Emiliania huxleyi. As with these carbonate shells, microorganisms most often deposit such minerals extracellularly. For other examples discussed in this blog, click here and here.

Only in rare cases are minerals accumulated within microbes. The iron-containing magnetic inclusions called magnetosomes made by magnetotactic bacteria are one example of such intracellular biomineralization. Forming these ‘biomagnets’ within the cell makes sense, as it enables the cell to orient itself in a magnetic field. The sulfur bacteria also deposit their sulfur-storage granules intracellularly. That has been pretty much it for mineral inclusions within bacteria, until the recent discovery of calcified microcannonball-like bodies inside a new species of cyanobacteria. It’s nothing like anything you’ve seen before. 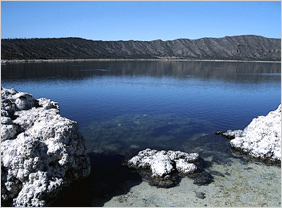 The waters of a Mexican volcanic lake, Lago de Alchichica, harbor microbialites (aka stromatolites or sedimentary deposits whose formation is influenced by microbial mat communities). Here lives Candidatus Gloeomargarita lithophora, a newly identified cyanobacterial species descended from an early cyanobacterial branch. The cells are stuffed full of spherical bodies of a rare calcium carbonate mineral called benstonite. Surprisingly, these benstonite spheres contain as much magnesium, strontium and barium as they do calcium. These metals are not found at these concentrations in the lake water, suggesting that the cells are acquiring them through an active transport system. Each cell contains on average 20 inclusions. Conveniently, these cyanobacteria can be grown in aquaria containing microbialites from the lake, where they form phototrophic biofilms on the glass walls.

It would be nice if I could round out the story by giving a good reason why the cyanobacteria make these unusual structures but, as yet, this is all pretty speculative. One possibility suggested by the authors: since these microcannonballs alter a cell’s buoyancy, they could perhaps be used as ballasts so the bacterium could sink to the bottom of the lake (although it’s surely not obvious why these photosynthetic organisms would want to do that). Or maybe these calcified nuggets are a by-product of photosynthesis under low CO2 conditions. At such times, cyanobacteria can fix carbon using bicarbonate as their CO2 source. Converting bicarbonate to CO2 raises the pH, which promotes calcification. These two explanations are not mutually exclusive and, who knows, there may be others.

Whatever the answer turns out to be as to their cellular role, these strange intracellular structures add to the growing list of microbial biomineralization activities. In addition, this finding highlights the extensive biochemical repertoire of the cyanobacteria, organisms that have played a key role in the formation of our oxygen-rich atmosphere and the evolution of life on Earth. And while calcification by cyanobacteria is not news per se, its intracellular localization is. Fossils dating from at least 700 million years ago contain extracellular calcium carbonate deposits whose formation has been linked to rising pH due to the photosynthetic activity of marine cyanobacteria. This process took place on a large scale and produced large reefs. Whether the intracellular benstonite spheres could have contributed to the geological record of cyanobacteria is an open question and a difficult one to answer. The small size of the inclusions makes it hard to identify such structures in the fossil record. However, the unique chemical composition of these bodies, containing barium and strontium, may provide geological evidence for the activity of these organisms. For a commentary on this subject by an expert on cyanobacterial paleontology, click here.

So there you have it, a novel yet ancient cyanobacterium stuffed full of cannonballs of a rare mineral and we don’t have a clue as to why. As discoveries go, this one is surprising. Who would have thought it! 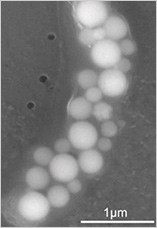 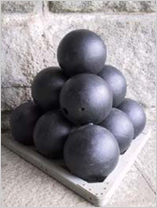 A stack of cannonballs. Source.