The common picture of a dividing rod-shaped bacterium encompasses the positioning of the di­visome, including an FtsZ-ring, in the cell center. This occurs after the cell has doubled its length without increasing its diameter. Conversely, increase in diameter without cell elongation would seem highly unlikely in a rod-shaped organism. Yet, this happens. 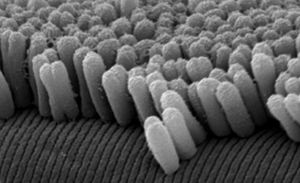 In fact, this is the normal condition for an ectosymbiotic bacterium that lines the surface of the marine nematode Laxus oneistus. The symbiont is a g-proteobacterium like E. coli, but unlike E. coli it has not been cultured outside its natural habitat. As originally described by Polz et al. in the early nineties, the bacteria are positioned perpendi­cular to the surface of L. oneistus. They are glued to the surface of the nematode by a C-type lectin. The original paper already indicated that division takes place longi­tu­dinally, with one of the daughters presumed to remain attached to the nematode. This makes sense because otherwise the daughter cells would get lost to the environment. Recall that this phenomenon lies at the basis of the Helmstetter-Cooper baby machine, whereby one of a pair of newborn cells is selected to start a synchronous culture.

Recently, Leisch and colleagues have extended these observations by carefully determining cellu­lar dimensions and visualizing the FtsZ division protein with fluorescent E. coli monoclonal anti­bodies. The results can be compared with E. coli data (Figure 2A, B). Whereas E. coli elongates as expected, this is not what happens with the symbiont. The symbiont does not change its length (Figure 2A) but increases its diameter (Figure 2B). Consequently,the symbiont divides longitudi­nal­ly, (Fig. 2 C-H). Immunostaining of FtsZ reveals that FtsZ positioning correlates with the cell con­striction. In fact, an ellipsoidal FtsZ-ring is observed stretched along the length of the ecto­sym­biont. 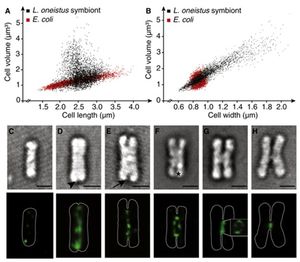 These remarkable observations provide more questions than answers. For instance, how does the diameter of the symbiont increase? Is the increase the same in all direct­ions or is it polarized? Though, the authors do not discuss this point, it would seem that the bacterium has the shape of a shoebox. Thus, increase in width implies wi­den­ing of the shoebox without altering its height. How is the shoebox-shape, if applicable, maintained? Further­more, how is DNA segregation carried out in the absence of cell elongation? How are the nucleoids arranged? It would seem that widening of the shoebox is sufficient. Again the spatial mechanism is not known. As pointed out by the authors, genes encoding Min, C, D and E are also present. Do they function in the symbiont, and if so how do they conform to different geometry? Answers to these questions are likely to elucidate the degrees of freedom in bacterial cell division. But that’s what we learned in our arithmetic class about the long division. Unless one deals with a whole number, there is always a remainder.

Prof. Nanninga is Emeritus Professor of Molecular Cytology at the University of Amsterdam Swammerdam Institute for Life Sciences