A Whiff of Taxonomy – The Acidobacteria

We occasionally post very brief taxonomic pieces on selected bacterial groups. Be warned that we may not be fully attentive to the taxon level and may mix up genera and higher taxa. 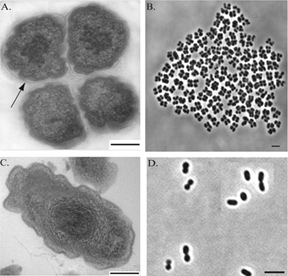 Phase-contrast and transmission electron micrograph of two soil isolates of members of the Acidobacteria, KBS 83 (A and B) and KBS 96 (C and D). The arrow in panel A indicates the capsular material layer produced by KBS 83. Scale bars indicate 1 μm (B and D) and 200 nm (A and C). Source.

The Acidobacteria are an offspring of metagenomics. Their existence as a phylum was not known until 1997, when their existence was first noticed using 16S rRNA techniques. But these are no obscure oddities living in extreme environments. Look for them in soils where they are among the most abundant bacteria, particularly in acidic soils where they make up 30-50% of all the 16S rDNA clone libraries. Belying their name, some of these organisms are found in alkaline environments, but the majority remains true to it and prefers a low pH.

Most Acidobacteria were hidden from us BM (Before Metagenomics) simply because they were part of the uncultured majority. The relatively few that have been cultured comprise about 1/1000 of the bacterial species in captivity. Their recalcitrance may reflect nutritional and physical predilections that are not readily satisfied in the lab. These organisms are distinctly oligotrophic: in the environment, they prefer poor soils to carbon-rich ones and their number decreases when soils are enriched with sucrose. Thus, you can “entice” them to grow in the lab under oligotrophic conditions, with best results being obtained when using a combination of low nutrient media, low pH and high CO2 concentrations in diffusion chambers. And patience helps greatly. When plates are sealed and incubated for weeks, colonies of Acidobacteria will show up.

So, what do they do in soils? Many different things, most likely.  Only a wide repertoire of metabolic activities could explain the difficulty in culturing, the group’s diversity, and their widespread distribution. There is some experimental data available to corroborate this. An isolate from the Yellowstone hot springs, Chloracidobacterium thermophilum,is a thermophilic phototroph, while another, Geothrix fermentans, carries out Fe(III) reduction—an activity that metagenomic analysis suggests may be widespread in Arctic soils. Most of what we know of the Acidobacteria has been inferred from genome gazing, and little else. This tells us that the group includes versatile heterotrophs that may be equipped to use various carbon sources, including plant polymers such as cellulose. Others have genes for making cellulose and for secreting a large class of novel high molecular weight proteins that may contribute to desiccation resistance, biofilm formation, or the alteration of soil structure. Genes for polyketide synthase and macrolide glycosylation have also being found in some genomes, suggesting they make antimicrobial compounds such as antibiotics.

I asked my friend and soil microbiologist David Lipson for his view on these organisms. He replied: One idea I find intriguing is that these guys are the sleeping giant in the soil: slow-growing, "K-selected" (or autochthonous!) species that hold on during stressful times, while Proteobacteria are generally the "r-selected" (zymogenous!) opportunists going through boom and bust phases when conditions are right.

One may well be stunned that such an ecologically abundant group of bacteria had remained largely unknown until so recently. But here you have it, abundant and widespread, with remarkable diversity, yet a group whose activities, by and large, remain to be elucidated. Who knows what surprises they will provide.