Art on a Dish 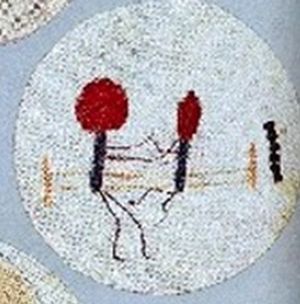 Fleming was one of the first to explore microbial art by creating “germ paintings” using living bacteria. Source.

Quite a few years ago, I spent some time viewing a natural history-inspired show at the Boston Museum of Fine Arts. One exhibit that especially caught my attention consisted of a meter-square dish containing what must have been EMB agar. This “plate” had been left exposed to the air and the ensuing mold colonies were allowed to grow until they became confluent. The result was stunning: individual molds displayed their natural colors plus those of the dyes (methylene blue and eosin) they selectively picked from the medium. The result was a riotous jumble of exceptionally vivid colors, from blues to reds. 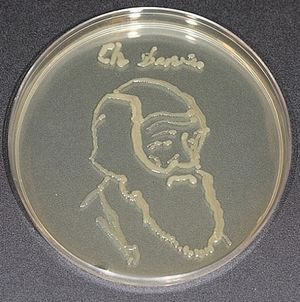 Darwin, as portrayed on agar using E. coli, by students in the Gregory lab. Source.

Although such “microbial art” is impermanent, it has had its adherents since the early days of agar plates. In fact, Alexander Fleming “drew” portraits, and even a pair of phage particles fighting. He inoculated the plates using pigmented bacteria and incubated the plates until growth became evident. To quote from this website Apparently he prepared a small exhibit of bacterial art for a royal visit to St Mary’s by Queen Mary. The Queen was ‘not amused and hurried past it’ even though it included a patriotic rendition of the Union Jack in bacteria. 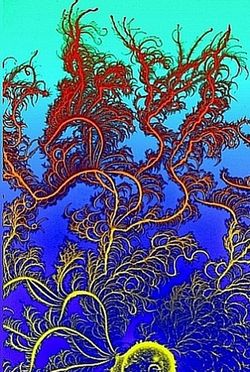 Patterns that Paenibacillus forms when grown in a petri dish. The colors and shading are artistic additions. The colony structures form as adaptive responses to laboratory-imposed stresses that mimic hostile environments faced in nature. By Eshel Ben-Jacob. Source.

The Microbial Art website contains a remarkable collection of art on a dish. A true gift to the eyes, this feast for the eyes is curated by T. Ryan Gregory of the University of Guelph. It includes 16 galleries of microbial art, most of them stunning in their beauty and inventiveness. Here you find pictures and patterns created using as “paints” inoculums of pigmented bacteria, and also a few labeled with fluorescent proteins. Others were painted with light, taking advantage of the bioluminescence of some bacteria. One gallery, by Eshel Ben-Jacob, makes no attempt to improve on nature and simply displays the stunningly intricate patterns formed by Paenibacillus as they wander on the agar surface. For more on this remarkable organism , click here.

What prompted this excursion into microbial art is a recent post by a friend of this blog, Mark Martin. Here Mark shares pictures form a recent Halloween party in his microbiology class. The students arrived in costumes, some imitating famous microbiologists, others, famous microbes. Mark arrived with a gallery of portraits (also shown on the post) of some of his favorite microbiologists “painted” with bioluminescent bacteria by his mathematician wife, Jennifer.

Mark Martin on the left and in a luminous rendition by his wife, Jennifer Quinn.  The bacteria? Photobacterium leiognathi.  Source.

Microbiologists are not necessarily thought of as having special artistic bents, but this notion is disavowed by these varied demonstrations of creativity. Go and take a look; it will be worth your time.

Addendum.  I found out that I had omitted a truly exciting blog on "microbial art" by Simon Park at the University of Surrey in the UK.  Click here.