« A Whiff of Taxonomy The Acidobacteria | Main | Talmudic Question #92 »

The Excitement of Clinical Microbiology 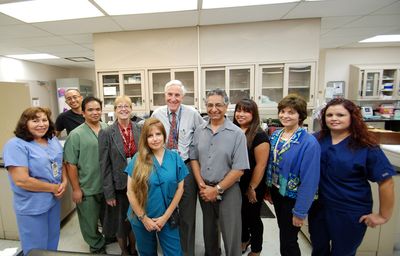 Clinical microbiology, one of the major branches of microbiology, goes largely unnoticed by academics, in part perhaps because the diagnostic activities of microbiologists are pursued separately, in hospital and commercial labs. I’d venture to guess that many academic microbiology researchers have never set foot in one of these labs. Their loss, as it would be an exciting and rewarding experience.

This rift casts aside the historical roots of our field. At its beginning, soon after bacteria were found to be the cause of infection, there was a huge rush to develop methods for determining the identity of agents responsible for a patient’s illness. Ingenious laboratory media were designed to favor the growth of certain organisms and to reveal their distinguishing properties, and serological techniques were developed alongside. In those days, there was no significant distinction between diagnostic microbiology and the rest. In time, as research in other fields of microbiology matured, these diverged more and more from this point of origin.

I find it unfortunate that such a cleft exists. From a practical standpoint, microbiology laboratories continue to make most of the diagnoses of infectious diseases in hospitalized patients and thus play a key role in medicine and public health. Further, the world of clinical microbiology can teach the rest of us a great deal. Some of you might recall the TWiM podcast recorded at the General Meeting of ASM in 2011, where Andreas Baümler lifted the curtain on how tetrathionate broth, an old medium used for the enrichment of salmonellae in stool specimens, selectively enriches for these species. Salmonella carries out anaerobic respiration using tetrathionate generated in the colon and thereby outcompetes the normal flora.

Clinical microbiologists uncover new and important pathogens, perform the role of sentinels to alert of possible upcoming epidemics, provide statistical and clinical information regarding the pathogens currently on the scene, and spur demands on research to create novel diagnostic tools. In fact, the development of such tools is taking place so swiftly that in not too many years the practice of clinical microbiology may well become unrecognizable. Not only will the introduction and use of nucleic acid-based techniques continue apace, but other sophisticated techniques such as mass spectrometry will make diagnoses ever more rapid and accurate.

Let me back up a moment and share with you a brief nostalgic trip I took recently. I spent a morning in the clinical microbiology lab of the VA Medical Center in San Diego, just following the people around in their normal course of work and asking a bunch of questions. The nostalgia arose because this experience took me back to my early years. As a youngster, I had the good fortune to work in a pharmaceutical company in Quito, Ecuador (for an account, click here and go to chapter 8). Since this was then the only facility equipped for microbiological work, it also served as the diagnostic lab for the local physicians. For a couple of years, I was more or less in charge of doing this work. And I loved it. To a kid in his late teens, what could be more exciting than finding out that a specimen contained such famous bacteria as staphylococci, typhoid bacilli, pneumococci, or shigellae? I remember the exquisite pleasure it gave me to isolate a somewhat unusual and difficult-to-cultivate organism, the agent of chancroid, Haemophilus ducreyi. I also isolated a strain of Klebsiella pneumoniae var. rhinoscleromatisthat led to my first publication and which made it into the ATCC. It’s still there. I felt that I had developed an intimate and personal relationship with all these exciting bugs. With such memories in my head, I stepped into the San Diego VA laboratory to learn, among other things, if anything has been preserved from the old days.

A modern inoculating needle sterilizer that replaces the old Bunsen burners (but the new gizmo may result in fingers getting burned more easily). Source.

Sure enough, much of what is going on in this lab is now automated. Biochemical tests for sugar fermentations and other physiological attributes, once a test tube business, are now performed several dozen tests at a time by inoculating a multisectored plastic plate. The readout is of course electronic and the identity of the bacteria revealed by comparison to a database. Blood samples are placed in a special incubator and monitored continuously for anything that grows and produces CO2. PCR-based tests are used to detect gonococci, chlamydiae, and many viruses, with more such applications on the horizon. For some specialized purposes, the material is outsourced to a central laboratory facility.

For all the new gadgetry, most of the lab’s transactions required old-time skills, and abundantly so. I’ll give you an example: Crucial to the work is “reading” the Petri dishes 24 hours after inoculation with a clinical specimen (sputum, feces, abscess aspirates, etc.). Each specimen would have been inoculated onto several selective and differential media designed to favor the growth of certain species and to disclose some of their characteristics (e. g., colonial morphology, sugar fermentations, hemolysis). 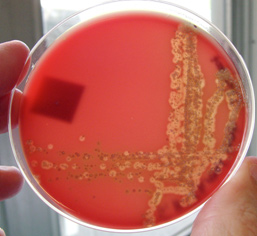 Blood agar plate inoculated with a throat swab and incubated for 24 hours. Note the great variety of colonial types. The areas of clearing of the blood cells reveal that the bacteria are hemolytic. Source.

Though “reading” the plates may sound simple, it surely is not. Every set of plates presents a different challenge about what to do next with each bacterial colony and it takes considerable experience to get it right. In fact, laboratory technologists (a title not to be confused with laboratory technician) go to school for five years but are not considered to be fully trained until they have had three more years of actual practice! I could see why it takes so long. The variety of information that can be gleaned from just looking at these dishes and smelling some of them seems endless. I could almost see the wheels turning in the brain of an experienced technologist, Tracy, as she navigated in her head through a set of decision trees. She had to choose among many paths, such as picking a colony for biochemical tests, making a smear for a Gram stain, carrying out antibiotic sensitivity tests, and so on. I could hardly believe how many judgments Tracy made in front of me in a matter of seconds, all while thoughtfully answering my questions.

One key problem confronting the technologist is to tell if the bacteria growing on the plates are relevant to the diagnosis or are adventitious contaminants. Not always easy. A specimen of sputum may have been badly tainted by the contents of the pharynx, a urine sample may come from a “bad catch,” or bacteria may have been picked up from the skin while drawing blood. Making this judgment may require looking at a Gram-stained smear of the specimen as well as at the colonies that grew from it. Jasmine, one of the newer technologists, showed me how looking at the smear helps her decide how to proceed. For example, if characteristic epithelial cells are present and neutrophils are absent in a sputum specimen, it probably contains mainly material from the throat and not deeper in the respiratory tract. And always there is the challenge of distinguishing potential pathogens from normal flora members, especially in samples that normally contain a large number of different organisms, such as throat swabs and feces. In addition, today’s technologist runs PCR and immunodiagnostic tests, thus must be familiar with such technology and keep up with its continual advances. Proficiency with other special techniques is required to diagnose fungal and animal parasites. Such an impressive array of essential skills would be hard to duplicate with machines. 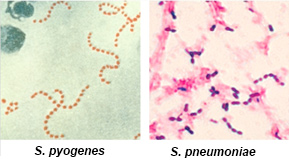 In a Gram-stained preparation, the α-hemolytic pneumococci appear slightly elongated as compared to the β-hemolytic S. pyogenes. You’ll appreciate that it takes an expert to tell the difference by the shape of the cells alone. Source: CDC.

Not surprisingly, basic science continually interfaces with both the established and the newer techniques. As Josh Fierer, my friend, infectious disease physician, and microbiologist, explained to interns and research fellows, it is important to glean as much information as possible from microscopic examinations of Gram stains. Here, basic microbiology knowledge often enters the picture. For instance, an experienced person can often tell a-hemolytic strep from b-hemolytic ones by just looking at them in a smear. The former add new cell wall material from the septum outward, thus will look elongated just after they divide. The b-hemolytics, on the other hand, make this material mainly at the septum, so, after division, they eventually become spherical. And there are many such tricks. Amazing, how much information of great value can be gathered from simple procedures combined with keen observation.

Some of the challenges these labs face are distinctly new. From time to time, Public Health agencies tasked with detecting bioterrorism send them “unknowns” and ask them to determine the identity of the bacteria. Depending on the organism, this can be a challenge or it can be relatively straightforward. But either way, they better get it right. Juan, the technical specialist in the lab, allowed that having to identify these “unknowns” is a good thing for the lab because “it keeps us on our toes!”

I was curious about how the people in the lab felt about the possible impacts of future changes. All the signs point to continuing technological developments geared toward increasing the speed of diagnosis but likely displacing laboratory personnel in the process. But when talking to Monica, the supervisor of the lab, I appreciated her assurance that even in a very high-tech world, human skills will still be required. She felt that though times technologies will change, the need for astute and experienced people will continue, even if the particular complement of skills required will somehow shift. She sounded confident. I was mighty glad.