The Slime That Smiles

Figure 1: Cell death occurs between the emerging digits during development. A fluorescent chemical was used to visualize regions of cell death in these embryonic mouse limbs. Source.

Have you ever wondered how individual fingers form? If you have taken a developmental biology class, you know that the hand first develops as a mitten-like structure with the future fingers connected (Figure 1). Later, during normal development, the cells in the areas between the fingers undergo programmed cell death, and thus leave behind five fingers on each hand. Programmed cell death is important not only in development and long term viability of animals, but also plays a role in unicellular organisms. For example, in the social amoeba Dictyostelium, a subset of cells undergoes a type of programmed cell death similar to autophagy to form fruiting body stalks. The remaining dead cells in the stalk are highly vacuolated and provide support for the spore body (figure 2). 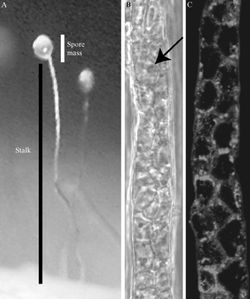 Figure 2: The stalk cells of Dictyostelium undergo programmed cell death. In panel C, dead cells are labeled with propidium iodine, which labels DNA of cells with compromised membranes. The vacuoles are unlabeled. Source. 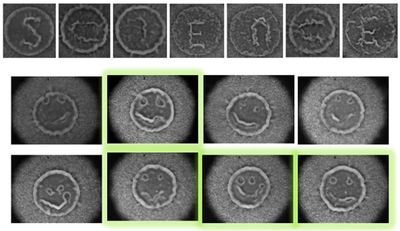 Figure 3: Letters and smiley faces artificially engineered on B. subtilis biofilms. The authors harness the power of cell death to engineer wrinkle designs on the biofilm surface. Source.

A new report initially caught my eye due to the Science magazine feature A wrinkle in slime and all the smiley faces that had been artificially induced in B. subtilis biofilms (Figure 3). How were the authors able to accomplish this amazing feat of biofilm engineering? By selectively labeling dead and dying cells in biofilms with fluorescent chemicals, the authors show that areas of cell death ultimately become the location of wrinkles in biofilms (Figure 4). Cells in biofilms secrete extracellular matrix components such as polysaccharides and amyloid fibers. When cells grow and divide, the additional mass pushes on the existing matrix, generating an ever increasing force on cells. Localized areas of cell death allow the biofilm surface to buckle, relieving the excess mechanical force and alleviating the stress on individual cells. In support of this model, the authors demonstrate that mutant biofilms without an extracellular matrix exhibit uniform cell death (instead of the wild-type localized pockets) and form a wrinkle-free biofilm. Thus, the extracellular matrix is crucial to restrict the areas of cell death. The excess force distributed through the extracellular matrix underlies localized cell death in wild-type biofilms. In addition, the authors show that patches of cell death corresponded to areas where originally there was an increased cell density. In a neat demonstration, they artificially place initial areas of high cell density in cool patterns such as letters and smiles. As the biofilms developed, these areas were more likely to undergo cell death and wrinkle into the author’s designs. 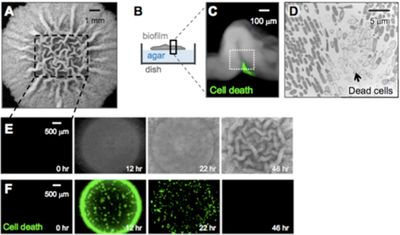 This paper shows that cell death helps generate 3D biofilm wrinkles by giving the biofilm surface room to buckle. I couldn't help but notice its parallels with programmed cell death during development. The cells in the biofilm encounter a mechanical stress due to increasing cell density. Somehow the cells “sense” this increased density, perhaps through forces generated by the extracellular matrix. These cells die in order to relieve the tension in the surface of the biofilm and help create wrinkles. In addition to the developmental processes of biofilms reviewed here, this provides an example of the importance of social interactions in bacterial biofilm development. In contrast to the programmed cell death undertaken to delay sporulation, by forming wrinkles, localized death can benefit the entire biofilm in nutrient rich environments as well as nutrient poor environments. Notably, biofilm wrinkles have been shown to deter the efficacy of antibiotics dissolved in liquids or applied by gases, as well as ethanol and other antiseptic cleansers. The resulting increase in surface area may also help cells obtain nutrients and expel waste.

The results of this study bring up many interesting questions. I am curious if the cells that die to enable wrinkling exhibit the hallmarks of bacterial apoptosis observed in this paper. I also wonder about the signals that induce these specific cells to die: is pure mechanical force the trigger or does this process involve a signal secreted from neighboring cells, similar to the cannibalistic cells that live off nutrients from dying neighbors mentioned above. Answering these questions will add new insights on how cell death to form biofilm wrinkles compares to known mechanisms of bacterial programmed cell death. In addition, the author’s demonstration of engineering biofilm structures can be used in synthetic biology and material sciences and could propel new cutting edge experiments and designs in tissue engineering.

Buddy said it best in the movie Elf, “I just like to smile. Smiling’s my favorite!” I am sure these bacterial emoticons have made countless people smile and marvel at the prokaryotic wonders that never cease to amaze.

Heidi Arjes is a graduate student in the Levin Lab in the Department of Biology at Washington University in St. Louis.