« A Bacterium Learns Long Division | Main | Art on a Dish »

Virus in the Room 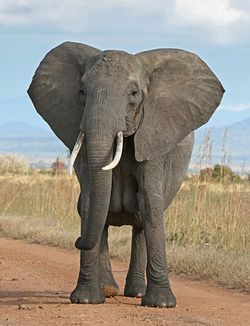 As biologists, we divvy the biological realm up into domains using a formula that frankly, smacks of nepotism, bestowing three glorious domains upon our closest relatives—the Eucaryota, the Archaea, and the Bacteria—while committing an injustice to the so-called viruses, lumping them together in a miscellaneous catch-all category (“viruses” from Latin for poison and other noxious substances) with contemptible disregard for phylogeny or any true measure of diversity.

Imagine that viruses, like Dr. Seuss’s Truffula Trees, had a vocal advocate like The Lorax. Undoubtedly, through the agency of their outspoken mouthpiece, they would protest these gerrymandered borders and laugh at our skewed notions of biological diversity. After all (the viruses would argue), just consider the platypus, the coelacanth, the earthworm, and the bacillus. All these organisms have double-stranded DNA genomes, whose lengths all fall within roughly the same order of magnitude, which they replicate using evolutionarily customized versions of what amounts to the same basic enzymatic apparatus. How boring! How unimaginative! Now consider this (the viruses go on to say): the giant Mimivirus, 1256 nm of girth enfolding >1,000,000 base pairs of DNA, and the tiny Circovirus, with a mere 1,800 bases of single-stranded DNA tucked inside a 20nm-wide shell, are neither more nor less related to one another than either one is to an elephant! (For those who are not familiar with the elephant, it is a relative of the platypus, the coelacanth, the earthworm, and the bacillus) 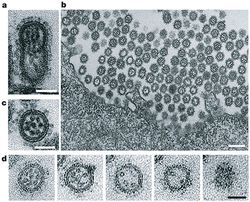 Figure 3: Images of influenza virions Note the eight individually packaged genome segments within each virion. Each of these encodes a different protein or proteins, all of which are essential to the virus. Source.

This diversity of genome styles each comes with its own uniquely-tailored replication system dictated in part by the need (shared by all viruses) to generate mRNA (because all viruses rely on host cells for translation). Importantly, there is very little if any phylogenetic evidence for a common ancestry connecting all the different viral types, or for grouping viruses together. Attempts to prove the existence of a last universal common ancestor of all viruses may be folly, as it is entirely possible that no such ancestor ever existed (that is, what we lump together as “viruses” actually represent uniquely evolved biological entities that happen, just by chance, to have taken on obligate intracellular parasitism as a mode of existence). At best, and by stretching the limits of phylogenetic comparisons, some of the RNA viruses can be combined into hypothetical “supergroups”.

Figure 4: The Baltimore Classification system. The Baltimore scheme is a nifty tool for memorizing the steps each kind of virus must take in order to use the translation machinery of its host’s cell. Thus far, all known viruses (including bacteriophage) fit into one of the seven categories. Modified from: Source.

The tables thus turned, the viruses demand a fair redistricting, with the viral realm to include no fewer than seven domains to our three. They also ask that we wear name-tags, since they are having trouble remembering how to tell an elephant from a bacillus.

Welkin Johnson is on the faculty of Boston College and an associate blogger of Small Things Considered.