Why Listeria Is Competent to Be Virulent 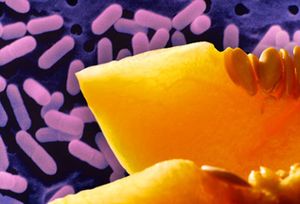 A listeriosis outbreak of 2011 caused 147 cases of illness and 33 deaths in 28 states in the US. The source was cantaloupes grown at one Colorado farm. Source.

It is downright scandalous that in our hi-tech world food-borne infections should be so prevalent (some 48 million cases a year in the US alone, with about 3000 deaths). The tools to take care of these problems are hardly mysterious, requiring mainly safe food production and preservation. High on the list of bacterial offenders is Listeria monocytogenes, a Gram-positive facultative intracellular pathogen that is acquired through ingestion of contaminated food or fluids. Listeria is found in uncooked meats, vegetables, fruits such as cantaloupes, unpasteurized milk and milk products, and some processed foods. Although pasteurization and sufficient cooking will kill Listeria, contamination often occurs after cooking and before packaging. Listeriosis is a disease primarily affecting pregnant women, newborns, adults with compromised immune systems, and the elderly. The two most common life-threatening symptoms are sepsis and meningitis. This is a serious disease with a relatively high mortality that can reach 25%.

L. monocytogenes is an intracellular parasite of epithelial cells and macrophages. It initially resides in a membrane-bound vacuole, the phagosomal vesicle, which is a dangerous site for many bacteria. In order to carry out a successful infection, it escapes into the host cell’s cytoplasm by lysing the vacuolar membrane via a pore-forming hemolysin, listeriolysin and two phospholipases. However, the precise mechanism of this escape is not fully understood. Once within the host cell cytoplasm, the bacteria replicate and use the host’s actin filament network to propel themselves within the cell and from cell to cell. 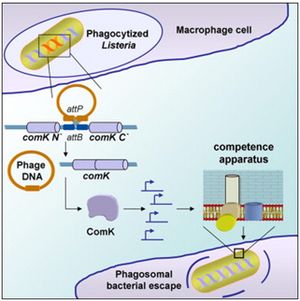 A schematic drawing of the activation of Listeria proteins that allow it to escape form the phagosome. Source.

A recent report tells us that there is more to the escape story and that another system is also involved. This one, it turns out, consists of three operons (comG, comF, and comE) that are homologous to the ones used by Bacillus subtilis to establish competence, the ability to readily take up DNA that can lead to genetic transformation. This complex competence system has been extensively studied in B. subtilis and other naturally competent bacteria such as Streptococcus pneumoniae. Listeria possesses a number of the so-called late com genes some of which, as this paper reveals, are essential for escape from the phagosomal vesicle.

The story is interesting, among other things, because it illustrates how a complex genetic system diverged to allow quite different functions. The two functions discussed here, competence in some bacteria and escape from vacuoles in others, may well have evolved from a common ancestral bacterium where, for all we know, it may have been implicated in yet different functions. Actually, uptake of DNA and damaging the vacuole’s membrane have in common that they both alter cell surface properties, disparate though the two systems may be. Of interest is that Listeria, although endowed with quite a few of the com genes, does not possess certain ones known to be directly related to DNA uptake in B. subtilis. It’s no wonder that repeated efforts to transform Listeria, even strains containing an intact comK gene, have always failed. 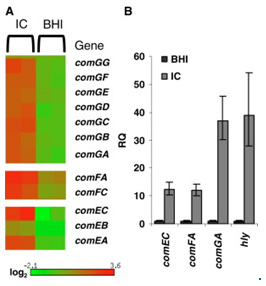 This study shows that the com system is essential for pathogenicity. Using microarrays, the authors found that the late com genes in all three operons are strongly induced upon infection of macrophages. Employing deletion mutants, the authors showed that only comG proteins (involved in making a Type II protein-secretion pseudopilus)and comEC (a transmembrane channel protein) were required for intracellular growth of Listeria both in macrophagesand in mice (but not for growth in broth). These two genes are not necessary for replication of the bacteria in the cytosol, suggesting further that they may play a role earlier on, namely in phagosomal escape. How did they find this out? Cytosolic wild type Listeria nucleate actin filaments but mutants in comG and comEC do not, telling us that they had not escaped from the phagosomes.

The Com proteins required for vesicle escape are under the control of a sole regulatory protein, comK. This protein carries a big load on its shoulders (by contrast, B. subtilis and S. pneumoniae have several Com protein regulators). The comK gene itself is under an interesting control mechanism. In growing Listeria, this gene is not functional because it is interrupted by a temperate prophage but it comes to life when the organism infects host cells. The prophage is now precisely excised by integrase, leaving the two ends of the comK gene to unite to make a functional protein. Such prophage-excision mechanisms to regulate gene expression have been reported in B. subtilis, S. pneumoniae, and a few other species. Mutants with deletions of the comK 5’- or 3’ termini or lacking the entire integrase gene (int) grew like wild type bacteria in broth but were not capable of growth in macrophages. This phenotype was reversed by introducing a plasmid containing either an intact int or a comK gene, suggesting that phage excision is specifically involved in producing an intact comK gene.

Unlike other systems where the prophages involved in excision are cryptic or remnants of a phage, this Listeria prophage actually encodes for an active, viable phage. Surprisingly, a plaque assay revealed that although the prophage had been excised from the genome, the usual ensuing sequence of phage propagation and release of mature virions was blocked in the infected macrophages. Why phage maturation is aborted here is not yet known, nor is the signal that activates the integrase gene within the phagosomal vesicle. It would seem like a good thing for Listeria to have a mechanism to inhibit lytic phage formation, but what is it? Something about the conditions within the vacuole maybe?

This paper reveals a unique control mechanism contributing to virulence in L. monocytogenes. Some as yet unknown signal within the phagosome triggers excision of the prophage from the bacterial genome, liberating an intact and functional transcriptionalregulator that allows expression of proteins from the three com operons. This leads to the formation of two components involved in phagosomal escape. Exit from the phagosome into the host cell cytosol is of critical importance and is required for a successful infection by Listeria. Once again, a pathogenic bacterium demonstrates its ability to select evolving pathways that allow them to fine-tune disease production.