A Whiff of Taxonomy – Verrucomicrobia, The Bacterial Warthogs

"We occasionally post very brief taxonomic pieces on selected bacterial groups. Be warned that we may not be fully attentive to the taxon level and may mix up genera and higher taxa." 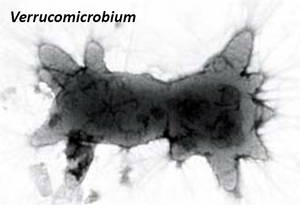 Unlike warthogs, likely to be considered beautiful only by their mother, the Verrucomicrobia  (verruca means “wart, thus the warty bacteria; more about this later) have considerable appeal, be it morphological, physiological, or ecological. This is yet another phylum that owes its recognition to nucleic acid technology. Although few of its members have been cultivated, 16S rRNA studies have confirmed that they are widely distributed in many environments, such as fresh water, oceans, soils, and even vertebrate feces.  Some are host-associated, their hosts including humans and, just because you need to know it, their proportion in the gut of ground squirrels increases as they hibernate. There are no known pathogens in this group although suspicion has arisen. 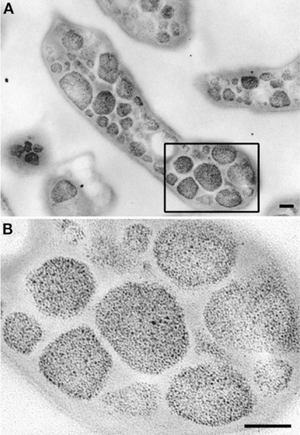 (A) Glycogen is seen in the otherwise electron light particles abundantly present in the cytoplasm. (B) Zoom-in of the boxed-in area in (A).  Scale bars, 100μm. Source.

If you favor unusual and wondrous forms of life, this is a group of organisms for you. Some are autotrophs that grow at high temperature acidic environments by oxidizing methane. Remarkably, when they stop growing, they fill up with glycogen to the tune of 36% of their dry weight.   Among the strangest of the Verrucomicrobia are the epixenosomes (“external alien bodies”) that we featured in an early post. These bacteria cling to the surface of certain ciliates and, in response to yet unknown stimuli, morph into ostentatiously long filaments consisting of tubulin-like proteins.  Others in this phylum are endosymbionts of nematodes. Search for more and you will find it: enter Verrucomicrobia in PubMed and you get 15 pages of references. To add to their tantalizing properties, they have been placed in the monophyletic PVC superphylum, along with the equally curious Planctomycetes and the Chlamydiae. This is in the realm of controversy and discussion; some thinking that in this group some missing links between proks and euks are to be found. 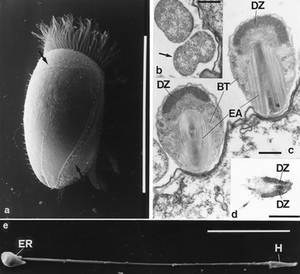 Now for their morphology. They are not called “warty” because they cause warts, but because they sport wart-like bumps on their surface.  Notably, these protrusions are often in the same plane, making the cells looked like scalloped pancakes. What service do these odd structures perform for their cells? Hard to say, but they alter the hydrodynamic properties and change the surface to volume ratio.  Verrucomicrobia now figure prominently in studies of bacterial tubulin. For instance, Btub A and Btub, the closest homologs to eukaryotic tubulins, were discovered in a member of this group, Prosthecobacter. We have it on this blog before, in an article by Daniel Haeusser entitled Tubulins in the Verrucomicrobial Closet.  So, doesn’t it seem reasonable that such proteins may play a role in verrucomicrobial morphogenesis? Stay tuned, as surely more is coming.  But even now, the Verrucomicrobia make for good cocktail hour conversation.