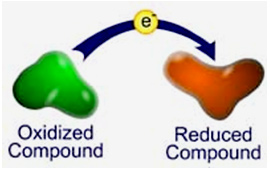 Although both cooperation and conflict are decisive forces in evolution, some of the most successful microbial strategies for survival have arisen from cooperation.  At times, two or more microorganisms can even come together to breathe as one. Breathing, or respiration, accomplishes a most challenging fête: the disposal of electrons generated in metabolic cellular reactions to gain energy for growth. The electron donors and acceptors that microorganisms can use for respiration can be aligned hierarchically on a tower based on their redox or reduction potential (to wit, their affinity for the electrons). The more positive the potential, the easiest it is for the molecule to capture the electrons (i. e., to be reduced) and the more energy that is gained from the reaction. The redox tower provides a visual reference of the energy that microorganisms may generate from the transfer of electrons to each chemical species. Oxygen, for example, has a higher redox potential (it is more electropositive) than nitrate [NO3-)] or iron ([Fe(III], often present in nature as hydrated iron oxide -FeOOH-). As a result, more energy is generated when oxygen is used as the terminal electron acceptor. 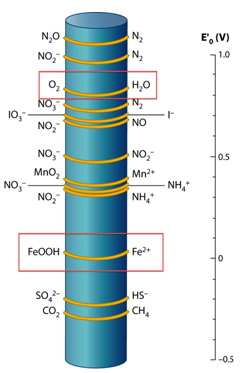 Redox tower showing the reduction potential (E’0, expressed in volt -V- units) of redox reactions catalyzed by some microorganisms (oxidized species on the left and reduced species on the right). The more electropositive the potential, the higher the energy yield from the reduction one chemical species (on the left) to another (on the right). The reduction of O2 to H2O and iron oxides -FeOOH- to Fe2+ is highlighted within red boxes. Modified from source.

Because there is high competition for the most energetic available electron acceptor, microorganisms have also evolved mechanisms to cooperate during their respiration. The process, known as interspecies electron transfer, involves the exchange of electrons between two microbial partners to enable a reaction that each could not accomplish individually. These organisms are said to be growing syntrophically (“feeding together”). The electrons are exchanged using mediators, most often metabolites. The canonical example of interspecies electron transfer consists of the exchange of electrons as molecular hydrogen (H2). Hydrogen being a gas, the microbial partners can maximize its rate of exchange by growing in close proximity to each other, often forming cell aggregates or granules. The fermentation of organic substrates by some bacteria is, for example, greatly stimulated in cocultures of hydrogen-forming fermentative bacteria and hydrogen-consuming organisms such as methanogenic archaea. Both organisms benefit from the exchange: unless removed, hydrogen accumulates and slows down or even inhibits the bacterial fermentation; without the hydrogen, the methanogen cannot grow autotrophically and reduce CO2.

For some microorganisms, syntrophic partnerships are obligate. The fermentative and respiratory metabolism of the aptly named bacterium Syntrophus aciditrophicus, for example, is restricted to specialized pathways for the degradation of low-energy substrates such as fatty acids and benzoate and for rerouting metabolic electrons to hydrogenases, thus generating hydrogen. The removal of hydrogen makes an otherwise endergonic (energy requiring) reaction exergonic (energy releasing) and allows the bacterium to generate energy for growth. As a result, this bacterium can degrade compounds such as fatty acids and benzoate but only when growing syntrophically with a hydrogen-consuming partner, typically a sulfate-reducing bacterium or an archaeal methanogen. 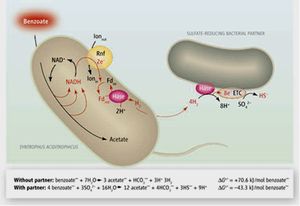 Interspecies hydrogen transfer enables Syntrophus aciditrophicus to gain energy for growth from the degradation of benzoate. The syntrophic partner is typically a hydrogen-consuming sulfate-reducing bacterium but it can also be a methanogen. Source.

A recent paper by K. Watanabe’s team reports a new mode of interspecies electron transfer mediated by conductive minerals. They studied Geobacter sulfurreducens, a bacterium that couples oxidation of acetate to reduction of iron but that cannot use nitrate as an electron acceptor. On the other hand, another bacterium, Thiobacillus denitrificans can reduce nitrate but cannot use acetate as an electron donor.  G. sulfurreducens is known to produce hydrogen as an electron sink under some conditions, i.e., when grown under electron-acceptor limiting conditions. However, Thiobacillus cannot use hydrogen as an electron donor for nitrate respiration.Thus, these two organisms cannot grow syntrophically with acetate and nitrate by carrying out interspecies hydrogen transfer. The authors noted however that addition of magnetite particles to the coculture promoted their metabolic cooperation and enabled the coupling of acetate oxidation and nitrate reduction. Magnetite is a conductive iron oxide mineral (Fe3O4) so the team hypothesized that the mineral particles were enabling the transfer of electrons in the form of electric current flowing between the two microbial partners. In support of this notion, insulating mineral particles such as the iron oxide mineral ferrihydrite (FeOOH) and alumina (Al2O3) particles did not work. Another iron oxide mineral hematite (α-Fe2O3), which is semiconductive, enabled the transfer of some electrons between the two microbial partners but much less efficiently than the conductive magnetite.

The partnership between G. sulfurreducens and T. denitrificans is a good example of how interspecies electron transfer allows organisms to extend their metabolic capabilities beyond the confines of their own metabolic network. The metabolism of Geobacter enables the efficient oxidation of acetate, which is often abundant in anaerobic environments during the fermentation of organic matter. Thus, by partnering with Geobacter, Thiobacillus cells access an abundant electron donor and benefit from its efficient utilization. G. sulfurreducens, on the other hand, expands the range of electron acceptors it can use for the oxidation of acetate to nitrate. Nitrate is also more electropositive than iron (note that it is placed higher than iron in the redox tower shown in Fig. 1). Thus, it has more affinity for electrons and cells generate more energy from its reduction. Everybody wins. It is also important to note that magnetite (a mixed Fe[III]-Fe[II] valence mineral) is also the natural byproduct of the reduction of hydrated iron oxide by Geobacter. Hence, once the iron oxides are reduced, Geobacter cells can ‘recycle’ their own waste product and reuse it to establish electronic contact with the Thiobacillus partner. Smart strategy. 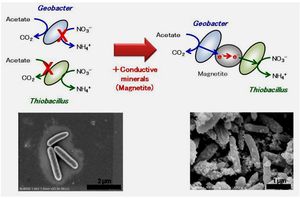 The idea that microbesuse conductive minerals for respiration also has important biotechnological implications. It has being known for long that some microbescan use electrodes as electron donors or acceptors in devices known as microbial fuel cells. The cells actually stack on the electrode surface and form an electroactive biofilm that facilitates electron flow between the cells and the electrode. Geobacter, for example, can oxidize acetate and other organic acids using electrodes as electron acceptors, thus generating electric currents.  Other microbes like Thiobacillus can use the electric current to reduce electron acceptors such as nitrate. Each organism performs its reaction in separate chambers of the fuel cell: Geobacter in the anode, where electrons are generated, and Thiobacillus inthe cathode, where electrons are received. The work of Watanabe’s team supports the notion that Nature may have selected for other organisms that exchange electric currents to couple redox reactions. These very same reactions could be mimicked in microbial fuel cells.

Perhaps the most fascinating aspect of interspecies electron transfer is not so much the mechanism that mediates the transfer but the evolutionary gain that microorganisms get when breathing as one. The famed Lynn Margulis and her son Dorion Sagan discussed in their 1997 book What is Sex? “the basic arithmetic of live”. “In biology”, they wrote, “1 + 1 does not equal 2, but rather 1 + 1 = 1”. Their equation does indeed describe the nature of the chemistry that brings two species together to function as one. In some cases, all it takes is a ‘zap’.

Great post - it's been included in the 55th Carnival of Evolution on Genome Engineering at http://tinyurl.com/55thCoE