« A Whiff of Taxonomy – Verrucomicrobia, The Bacterial Warthogs | Main | TWiM #47: Resistance on the Surface »

We continue our semi-annual ritual and offer this quick tour of our blog postings since our June 2012 Retrospective. 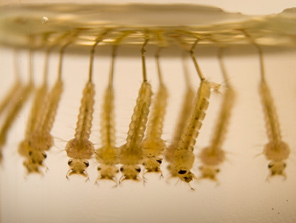 Galectin 8: The Cell’s New Sheriff?
Graduate student Andy Cutting delves into the arcana of autophagy and explains why it matters to Salmonella.

Fishing With Algae For Malaria Vaccines
Making a vaccine for malaria, one of humanity’s scourges is a matter of great urgency.  James Gregory discussed how algae can be used to make an effective antimalarial vaccine.

A Kick in the Midgut
Another strategy for subduing malaria would be to kill the parasite as it wanders though the mosquito. Fellow blogger Marvin Friedman tells us about a pertinent experiment.  Be prepared for some mosquito anatomy.

The Road to Microbial Endocrinology
One of the founders of this field, Mark Lyte, shares some of his experiences on what was a times quite a rocky road.

Coxiella Intercepts Host Signals!
Marvin digs into the ways coxiellas counter apoptosis of their host cells. It’s surprising, how many there are!

Why Listeria Is Competent to Be Virulent
Genes for competence (uptake of DNA) can be co-opted  for something completely different; in the case of Listeria, they become tools for escaping from phagocytic vacuoles, as discussed by Marvin. 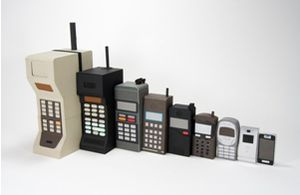 Begetting the Eukarya: An Unexpected Light
Our sage friend Frank Harold ventures into the challenging topic of eukaryogenesis, and in so doing offers us a worldview that is not only broader but even more exciting.

Fine Reading: Speciation by Symbiosis
Endosymbiosis is what we have to thank for being Homo sapiens.  Examples of how symbioses contribute to the evolution of new species are discussed in a review by Brucker and Bordenstein.

Livestock Bacteria Are as Old as the Livestock They Kill
A bad bug for cattle, Mycoplasma mycoides, evolved as a species about the same time as their hosts. Lucas Brouwers explains that two of the most deadly strains came along later.

Oddly Microbial: Cancer Cells
When you stop to think about it, cancer cells have some microbial attributes. The list is actually quite long. Marcia Stone , a friend of this blog, finds this viewpoint intriguing

An Evolutionary Tale of Zombie Ants and Fungal Villains & Knights
Fellow blogger Gemma Reguera takes us back to the amazing world of thought- and behavior-control of insect by parasitizing fungi.  The latest twist is how yet other fungi help the ants fight back. 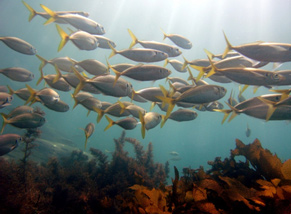 Who Would Have Thought It?
Some bacterial species are common in any given environment, some rare. Which ones ought to be easier to cultivate? Guess again.

The Tyranny of Phylogeny: An Exhortation
Elio gets on his high horse and exhorts us to include ecology, like evolution, in all biological thinking.

Life On the Edge: What Happens When Phosphorus Is Limiting?
You would think that life with little phosphorus is tough, and so it is. But bacteria adapted by making membranes with a variety of lipids that lack phosphorus. Here, Howard Goldfine expands our lipid horizons. 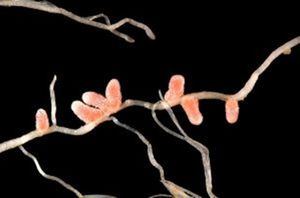 How an Endosymbiont Earns Tenure
Marvin Friedman picks on Paulinella, an ameba that carries within a pair of cyanobacterial endosymbionts. Are these on the way to becoming plastids? But then, how do you tell a symbiont from an organelle?

Fine Reading: Cnidarians and Dinoflagellates Together
Merry discusses a comprehensive review of the symbiosis between Cnidarians (corals, anemones hydra, etc.) and dinoflagellates.  This is how an animal can become photosynthetic, sort of.

A Table for Two
One parasite should be enough, but some bacteria can get infected by a Bdellovibrio predator and a phage at the same time. Enough already!

Two Tales of Symbiosis
Elio unveils his first law of endosymbiosis and discusses two examples, one where such symbionts mysteriously have flagellar genes, the other where flagella are used by a synthrophic consortium of a bacterium and an archaeon. 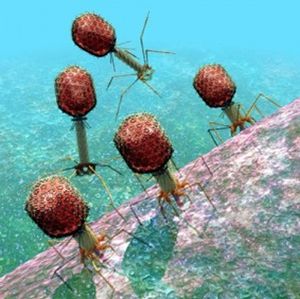 Virus in the Room
Where is the most biological diversity to be found? Fellow blogger Welkin Johnson thinks it clearly is in the viruses. Just look at their diverse genome structures.

MicroRNAs and Retroviral Integrity
The retroviruses are nothing if not clever but one of their group, the deltas (e.g.,  BLV and HTLV-1 are the only ones to make micro RNAs, a topic discussed by Jamie Henzy

The Rise of Genomic Superspreaders
Graduate student Steven Quistad has some curious things to say about those curious endogenous retroviruses and why the loss of some of their genes increase their proliferation.

Ehux: The Little Eukaryote with a Big History
Phages and sex matter a great deal in the collapse of the giant blooms made by this little alga, as discussed by student Jaime Zlamal.

Phee ɸ Phoh PhuZ: A Tale of Giant Phage with a Furtive Tubulin
Fellow blogger Daniel Haeusser discusses a recent novel finding: the production of tubulins by phages. Why on Earth do they do that?

Revisiting BYOG: Bring Your Own Gene
Merry continues to share her fascination for cyanophages, that group that carries genes for photosynthesis. This latest chapter tells an even more sophisticated tale of metabolic manipulation by these experts. Stained glass by Judith Schaechter. Courtesy of the artist.

Seeing Biology Through the Eyes of Visually-Impaired Students
How to teach microbiology to someone who can't see a centrifuge or a classroom demonstration, let alone bacteria or their colonies? Amy Vollmer shares with us her experience. It can be done!

Blog Evolution
Merry shifts gears, ending her many years as co-blogger, but now becoming emeritus, and continuing to act as part of its main cytoskeleton, much to Elio’s relief.

The Higgs Boson and Biology
With that elusive particle in the news, Elio had fun asking physicists why we should care.

Directed Science, Curiosity-Driven Science, and Striking the Balance
Jeff Miller, the new president of ASM, shares with us his thoughts about the need to support “non-directed’” that is basic science. Food for thought, if not for the stomach.

The Excitement of Clinical Microbiology
Elio thought that the clinical lab is terra incognita to most microbiologists, so he went to visit one. Here he shares his travelogue, with unexpected and exciting vistas

Requiem for a Machine
Ever heard of the Model E? That was an analytical ultracentrifuge, the pride of many  a department. Elio recalls it fondly and rues its demise.

Book Review: Son of Double Helix
Watson’s original book was good. This version, amply illustrated and further documented, is at least as good if not better.

Why Medical Microbiology Is Not Like Stamp Collecting
Elio pontificates once more, this time on why teaching microbiology to medical students should not be a listing of facts, no matter how exciting these may be to the lecturer.

Art on a Dish
Microbiologists like to play with agar plates and draw on them with bacteria. Some of the results are stunning. 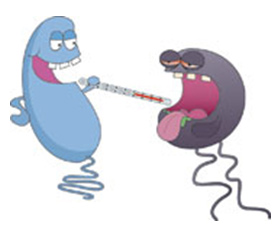 Faster than a Speeding Bolt: Mycoplasma Walk This Way
Daniel presents a truly extraordinary story, how some mycoplasmas walk on stilts (or something like that).

Teaching E. coli to Endocytose
Here’s an amazing story. Introduce into E. coli the gene for caveolin, a protein involved membrane vesicle formation in euks, and what does E. coli do? It makes vesicles and more vesicles, literally filling the cell with them!

A Whiff of Taxonomy
Elio started a new blog department, one devoted dot short piece about particular microbial taxa. The first one is on the Roseobacters. The second, on the Acidobacters is found here.

Who Would Have Thought It?
Bacteria make mineral deposits, but usually outside their cells. Here are some cyanobacteria that form benstonite “cannonballs” within.

Love At First Zap
We’re used to having electrons flowing from a wall outlet to power our lifestyle. Gemma reminds us not only that bacteria use electron flow for their energy production, but that this can be an obligatory co-operative effort between species.

The Colors of the Microbial Rainbow
Ever wonder why some bacterial colonies look like colors of the rainbow?   Gemma explains the reason for this phenomenon.

The Slime That Smiles
Ah, the mechanics of biofilm and colony formation!  Here we find that B. subtilis makes them in waves. Graduate student Heidi Arjes explains.

A Bacterium Learns Long Division
Nanne Nanninga tells us of a bacterium that divides lengthwise, not across at the midline like a respectable bacterium. Strange? Indeed. This eccentric has only been found living of the cuticle of some worms, which may or may not have something to do with this quirk.