Biting the Hand That Clothes You 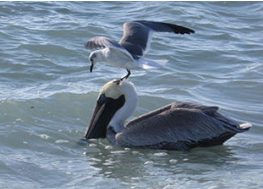 (Fig. 1.) This laughing gull is a kleptoparasite poised to steal food caught by the brown pelican. Since kleptoparasitism also includes the stealing of nest material from one animal by another, I would apply it also to the theft of capsid proteins from a helper phage by a SaPI. Source.

Troublesome strains of Staphylococcus aureus are often troublesome because they carry genes for superantigens and multiple antibiotic resistance. But don’t blame the bacteria. These genes are hitchhikers that arrived by horizontal gene transfer, embedded within mobile pathogenicity islands known as SaPIs. SaPIs are common; all S. aureus strains investigated so far carry at least one. They have also been found in other staph species and a few other Gram-positive genera. They have garnered much research attention because they rapidly move those clinically-significant genes from host to host. (They received some attention on this blog, too, several years ago.) The typical SaPI is composed of 15-17,000 base pairs of DNA that encode 18-22 proteins. Of those proteins, nine at most are required for the SaPI life cycle. This leaves plenty available to use to benefit or manipulate their host bacterium.

SaPIs resemble temperate phages in that they travel from host to host within a capsid and, upon infection, they choose between two options: they can replicate immediately or they can integrate into a specific site in the host chromosome and assume a quiescent state, held in check by a SaPI-encoded repressor. You might think of them as defective phages because they don’t encode the structural proteins required for their own capsids, relying instead on a “helper phage” to supply them. However, these kleptoparasites (see Fig. 1) are no more defective than every other sophisticated parasite that exploits another life form to provide some essential goods or services. It isn’t simple to be a successful parasite. Let’s consider how SaPIs do it.

One obvious requirement for successful capsid theft is that the SaPI must replicate its genome when capsids are available. This synchronization can be achieved a couple of ways. For one, co-infection by a SAPI and a phage can lead to immediate replication of both. Alternatively, since most S. aureus strains also carry at least one prophage, a SaPI can integrate into the host chromosome and wait until the prophage is induced. Induction of the resident prophage also prompts the SaPI to exit from the chromosome and replicate. This SaPI replication is just in time to take advantage of the synthesis of phage capsid proteins. Synchronization alone does not guarantee capsids for the SaPI. The phage needs to be of the “helpful” sort, and not all are.

A “helpful” phage is one whose capsid assembly and DNA packaging can be exploited by the SaPI. No altruism here. Stuffing a SaPI genome into a phage capsid requires subverting the phage packaging machinery that otherwise would package only phage DNA. Packaging is done by the phage terminase. The small subunit of the terminase (TerS) recognizes the phage DNA, while the large subunit handles the actual packing. SaPIs encode their own TerS protein, one specific for SaPI DNA. Upon induction, SaPI TerS transcription gets underway before the phage’s TerS. Not only does this fill some capsids with SaPI DNA, but these can even be the majority. On the other hand, if you experimentally inactivate the SaPI TerS, all capsids contain only phage DNA. 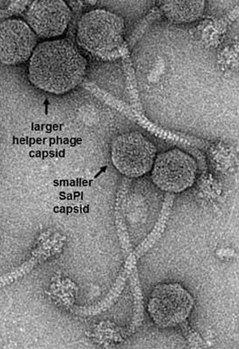 (Fig. 2.) Electron micrograph showing both larger helper phage capsids and smaller SaPI-containing capsids. The helper phage virions possess the long, flexible tails typical of members of the Siphoviridae. The SaPI virions are identical to those of the phage except for the dimensions and symmetry of their capsids. Image courtesy of Terje Dokland. Source.

Many SaPIs also take advantage of their smaller genome size (only one third of the size of the helper phage’s) and assemble smaller, SaPI-size capsids. This architectural sleight-of-hand is possible because two different size icosahedral capsids can be assembled from the same building blocks. The SaPI helper phage assemble 415 copies of their major capsid protein into a 63 nm capsid with T=7 icosahedral symmetry, while the SaPIs build smaller, 46 nm capsids with T=4 symmetry from 240 copies. Assembly of the small capsids does require a SaPI-encoded protein in addition to the phage-encoded building blocks. That SaPI protein is an internal scaffolding protein. Scaffolding proteins function as chaperones; they direct capsid assembly and are then discarded from the capsid when the DNA is packaged. The SaPI scaffold mimics the helper phage’s own, but directs formation of the smaller capsids. These small capsids may account for 80% of the virionsproduced.The SaPI TerS can also package SaPI DNA into full-sized capsids. Since packaging uses a headful mechanism, three copies of the SaPI genome are now packaged instead of one, but nevertheless these large SaPI capsids are infectious.

SaPIbov2 uses yet another tactic to exploit its helper. (The name ‘SaPIbov2’ tells you this was the second SaPI found in an S. aureus strain causing bovine mastitis.) In addition to making its own TerS, SaPI bov2 also disrupts the functioning of the phage’s TerS. The SaPI gene involved is aptly named ppi for phage packaging interference. To explore this, researchers expressed the ppi gene in an S. aureus strain that carried the helper prophage but no SaPI, and then induced the prophage. The phage replicated its genome, made capsid proteins, and lysed the host cell as usual, but the lysate contained mostly proheads and tails instead of intact virions and the number of phage progeny (measured as plaque-forming units) decreased 500-fold.

The researchers suspected that the ppi gene product Ppi disrupted packaging of the phage DNA because during phage assembly the DNA has to be packaged before the tail can be attached to the prohead. They did more experiments and demonstrated that Ppi interfered with the phage TerS. For this they isolated phage mutants that were able to form plaques on Ppi-producing strains, then sequenced the TerS isolated from ten of them. All ten mutants had a single amino acid substitution in the region of the protein known to interact with the large subunit of the terminase. Using a pull-down assay they found that Ppi binds to wild-type phage TerS, but not to any of the ten mutant TerS proteins and not to the SaPI TerS. Clearly, Ppi specifically binds to the phage TerS and prevents it from working. Thus, when SaPIbov2 and its helper phage replicate together, virtually all DNA in capsids is SaPI DNA packaged by the SaPI TerS. So far, all known SaPIs carry a ppi gene, but these genes vary in their effectiveness, playing more important roles in some SaPI-helper phage pairs than others. 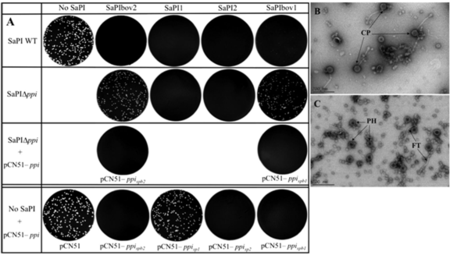 These same researchers also presented preliminary evidence of yet another interference tactic that involves neither small capsid production or ppi. This mechanism is as yet unknown. This will be number four. Likely it won’t be the last. Helper exploitation has evolved repeatedly, employing a variety of tactics. Exploitation of phage P2 by satellite phage P4 also involves the assembly of small capsids by P4, but the mechanism here is different. There are also helpers and helpees among the eukaryotic viruses (e.g., the adeno-associated virus and Sputnik). There are bound to be many more out there just waiting to be discovered. Kleptoparasitism pays!