We know quite a bit about how the wild aurochs or their ilk evolved into tame, bossy cows and how the insignificant grass teosinte became nutritious maize, but what do we know about the evolution of microbes involved in food and drink production? For thousands of years before the advent of microbiology, our ancestors used microbes for this purpose without knowledge of the contributions or the domestic origins of these small workhorses. Even today, when microbes continue in key roles during food and beverage production, we know far less about their evolution of domestication than we do for the process in animals or plants.

Why should that matter? Obviously, we humans would like to encourage microbes that benefit us and hinder microbes that harm us. The key to this is understanding what evolutionary routes can lead to one state or the other and how they can be purposefully altered to favor the benefits.

A recent publication by Gibbons et al. analyzed the ‘evolutionary imprint’ of microbial domestication using genomic data from the filamentous fungus Aspergillus oryzae. This fungusis used in the food and beverage industry to hydrolyze polysaccharides during the production of miso, rice vinegar, soy sauce, and notably, sake (Figure 1). The fungus is such a vital part of Asian cultures and cuisines that the Japanese manga (comic) Moyasimon and its anime adaptation have even made it a supporting character in the series.

Figure 1: The importance of sake and Aspergillus oryzae to traditional and modern Japanese culture. (A) Sukeroku shirozak euri (~1775 – 1781) by Koryüsai Isoda. Print showing selling of white sake. Library of Congress. (B) A field of the Aspergillus oryzae character from the Japanese manga/anime series Moyasimon: Tales of Agriculture (via Google Images). (C) A conidium (asexual, non-motile spores) of Aspergillus oryzae. Source.

Domestication of A. oryzae involved the selection of strains with pleasing fragrances, rapid mycelial growth, high yield of amylases, and low production of pigments or toxins. In other words, humans of the distant past inadvertently encouraged the success and survival of strains that could break down complex carbohydrates in soy and rice into simpler compounds that enhance product flavor. This tamed fungus likely derived from a strain of A. flavus, an agricultural pest of seed crops that produces carcinogens, the aflatoxins, which target the liver. Interestingly, aflatoxin is also toxic to yeast, another fungus integral to sake production, partially explaining why domestication of A. oryzae selected against it.

Gibbons et al. first looked at the genomic differences between strains of A. oryzae and its wild relative A. flavus (95.5% genetic similarity). Sixteen strains split evenly between A. oryzae and A. flavus revealed a monophyletic (i.e. they all descended from the same common ancestor) A. oryzae with only ~25% of the genetic diversity found in the A. flavus isolates (Figure 2). Furthermore, while 86 polymorphic (genetically variable) sites were identified in A. flavus, only 6 were found in A. oryzae. In other words, domestication of A. oryzae from a single ancestor has to a large extent fixed its traits from further natural evolutionary variation, in contrast to what occurs in its wild ancestor.

The researchers then searched the A. oryzae genomes for regions that show evidence of recent positive selection. They assumed that alleles under positive selection should be ‘linked’ (through synteny) to neighboring chromosomal regions that show reduced variation by virtue of proximity, despite being under neutral selective pressure themselves. This is because chromosomal genes close to one another tend to be inherited together during meiosis, so if a given gene is beneficially kept during evolution, its close neighbors usually are too. Not surprisingly, the sixty-one identified putative regions of positive selection included genes involved in primary or secondary metabolism and degradative enzyme production or secretion. These general processes are all important during the breakdown of grains into palatable products in food and beverages. For instance, included within one identified regions is a gene for glutaminase, an enzyme that converts glutamine to glutamate, a well-known flavor enhancer found at high levels in products such as sake. 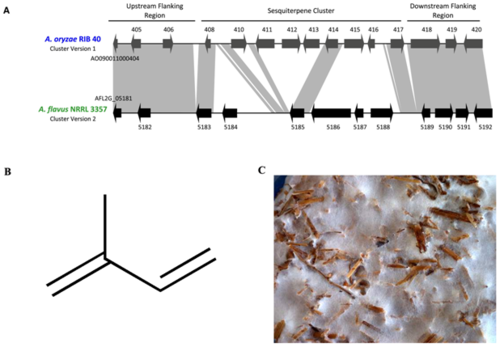 Figure 3: (A) Figure from Gibbons et al. showing the comparisons between the sesquiterpene synthesis clusters of A. oryzae and A. flavus. Gray shading represents regions with high sequence similarity. (B) The structure of isoprene, the building block of terpenes, a chemical group that includes the sesquiterpene class of compounds. Source. (C)Trichoderma virens, a symbiotic fungus of plants that produces flavor-enhancing sesquiterpene compounds, here shown growing on wheat straw in solid-state fermentation. Source.

Further genome comparisons between the two fungi highlighted additional instances of positive selection in A. oryzae of key metabolic genes, including an augmented gene cluster related to sesquiterpene synthesis. These are chemicals used primarily in plants and insects for defense and as pheromones (Figure 3) that can also be food-flavoring aromatics. While conserved and fixed in A. oryzae isolates, this gene cluster is more variable and reduced in A. flavus genomes. Finally, looking at the transcript levels of A. oryzae revealed massive upregulation of carbohydrate metabolism, including a sugar modifier used in commercial sweetener production and an enzyme used to reduce acrylamide levels in starch-rich foods. Consistent with A. oryzae’s primary domesticated role in starch degradation, its most abundant transcript is for a-amylase and is encoded in multiple loci.

The domestication of A. oryzae thus was driven through specific metabolic changes, not via changes in physical form, as seen with plants or animals. This makes sense, given that humans selected for better tasting products. Importantly, these metabolic changes include both the upregulation of specific carbohydrate catabolism, but also included downregulation of genes involved in toxin production and of enzymes involved in degradation of plant polysaccharides whose products do not enhance flavors that humans appreciate.

For me, this study brings up two speculations in why microbial domestication that deserves further consideration and discussion (Comments are welcome!):

1) Laboratory strains are basically domesticated for growth in the lab. Researchers are aware, at least in the backs of our minds, that what we see in the lab may not be important in the wild and vice versa. But how deeply does this divide run? Does the repeated growth of a strain in a lab keep certain polymorphic phenotypes from ever arising, or is there bias selection toward phenotypes we hope for? Does it matter if a genotype/phenotype appearing in a lab experiment is unlikely to occur in the wild, and how can we know?

2) If pathogenic microbes like A. flavus can be domesticated for human benefit, it is conceivable that domestication of other pathogens could be a method of controlling human disease. The idea has been brought up before, such as in this TED talk by Paul Ewald. But it remains uncertain how easily this could be achieved or how broadly effective it could be. Even if a more beneficial, domesticated strain could be produced, this would not necessarily lead to the eradication of the extant pathogen. After all, A. flavus still is present throughout the world and is a frequent contaminant of foods.  A domesticated pathogen would therefore need to not just be harmless to humans, but also do one of two things: outcompete the wild strain for occupation of the host or prime the host immunity to fight off the wild pathogenic form.

It will be interesting to see how far the directed domestication of other microbes is possible, whether for science, health, or the cuisine. Perhaps, following in the steps of Wylie Dufresne, the next generation of molecular gastronomists will be composing their own unique metabolic variants of microbial genomes to domesticate microbes for signature dish flavors. A Top Chef critique of the future?: “I’m sorry. The fungus you used just expressed too much a-amylase. The dish was just sickeningly sweet. Please pack your strains and go.” 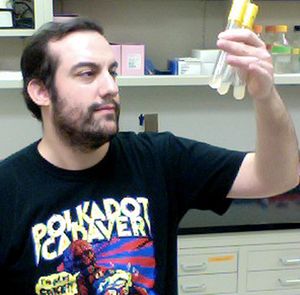