« TWiM #47: Resistance on the Surface | Main | Living Wires of the Ocean Floor » 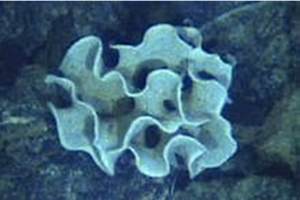 A Xenophyophore from the Galapagos Rift observed from the US National Oceanic and Atmospheric Administration's Ocean Explorer. Photograph by NOAA. Source.

We are embarking on our seventh year, not a bad age for a blog, and we continue to be astounded by the fanciful tales from the pint-sized world of the Small Things. So, just to be contrary, I’ll start out with a story of a group of giants among microbes, the single-celled protists called Xenophyophores.

If you were to visit the deep-sea bottom in many parts of the world, you would see a lot of these organisms. You couldn’t miss them, being that some are the size of a regular pancake. Had you been aboard the recent James Cameron Deepsea Challenger expedition to the deepest part of the oceans, the Mariana Trench in the western Pacific, you would have found them even there. Never heard of them? You’re not alone, as neither had I. This is something we should remedy, being that the Xenophyophores may be, depending on your criterion, the largest single cells extant—some  reaching 20 cm in diameter. It’s no wonder that in 1889 their discoverers first thought they were sponges. But single cells they are, endowed with many well-spaced large nuclei, each 2-10 μm in diameter. 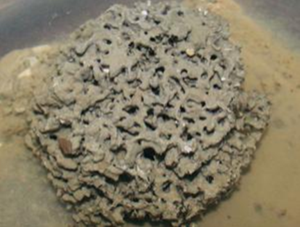 Syringammina fragilissima a xenophyophore that looks like a ball of sand. Image by Andy Gooday. Source.

The Xenophyophores comprise some 40 species that vary in shape from that of a bathroom sponge to a flattened or curly disk to a tetrahedron. The architects of these structures are giant amoebas, living encased in their owner-built shell. (The technical term for such shells is a “test;” that for the whole group, the “testate amoebas.”) Their shells are not made of the usual calcium carbonate, which becomes soluble at the high pressures of the oceanic abyss, but instead consist of organic material with bits of shells from other organisms plus mineral particles. In good amoeba fashion, they feed by taking up particulates via their pseudopods. And they host a whole zoo of small worms, crustaceans, nematodes, brittle stars, and other marine organisms, both on their shell and within it. Some of these organisms are hitching a ride, others are permanent residents. The name xenophyophore sums that up well: it means “carrier of foreign bodies.” 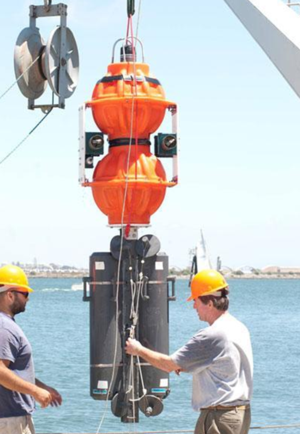 Picture the ocean floor nearly covered with Xenophyophores, in some places as many as 20 per square meter. Additional surface is shrouded by the copious slime they secrete. Little else is known about them as they are extremely brittle and have yet to be brought to the surface intact, but it is likely that they play important roles as scavengers, predators, and prey, as well as habitat builders. They stir up the sediment, thus allowing other creatures access to buried foodstuff and new sites.

Such gigantism is in keeping with the theme that the very deep ocean harbors giant life forms—big squids, crabs, and shrimps, among others. In addition there is another group of giant protists, also very abundant, called the komokiaceans, which we’ll save for some other time.

The researchers from the Scripps Institution of Oceanography at UC San Diego were justifiably excited by their finding the Xenophyophores in the Mariana Trench. My friend and colleague Doug Bartlett, who was the chief biologist for the Deepsea expedition, waxes eloquent when describing the experience. Keep in mind that so far we literally have only a glimpse of these organisms—pictures of them taken by lowering special cameras. The research team hopes to devise a rig that can retrieve intact specimens with which to start answering some of the many questions arising. Until then, these giants remain consigned to a rather shadowy category.

Moselio Schaechter on January 03, 2013 at 04:00 AM in Ecology, Protists, Teachers Corner | Permalink