« TWiM #48: It’s All About Direction | Main | Teaching Students To See Through “Microbial Eyes" » 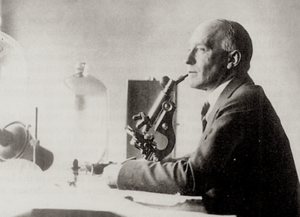 If you would like to have a particularly striking organism named after you, choose your collaborator well. The Harvard rickettsiologist S. Burt Wolbach was lucky to have such a colleague—the entomologist Marshall Hertig. In 1936, Hertig gave the name Wolbachia to the endosymbionts of mosquitoes they had jointly discovered in 1924. As is now widely known, Wolbachia are among the most common host-associated bacteria, infecting perhaps 70% of all insects, many spiders, and some worms to boot. And what they do for their hosts is mighty interesting. As an aside, it’s worth mentioning that the two discoverers were on the mark in deciding that the organism belongs to the Rickettsiales (Alphaproteobacteria). True enough, the genome sequence confirms that.

Wolbachia endosymbionts are transmitted maternally, hitching a ride on the zygote’s mitotic spindle. Among their most intriguing activities is their manipulation of the reproductive capabilities of their hosts. In females, they reside primarily in the ovaries, provoking a variety of reproductive consequences (some of which were described in earlier posts here and here). For instance, they skew the sex ratio in the population by killing male flies and enabling females to reproduce by parthenogenesis. They also reduce the number of uninfected flies in the population using a competitive strategy known as cytoplasmic incompatibility. Only uninfected females produce Wolbachia-free zygotes, but Wolbachia sees to it that infected males cannot mate productively with uninfected females. On the other hand, some species of flies cannot reproduce without their endosymbionts. In addition, some Wolbachia protect their host against infection by certain fungi and RNA viruses, including the agent of dengue fever.

Fast and co-workers have discovered yet another way Wolbachia tampers with reproduction: infection increases egg production in the fruit fly Drosophila mauritiana. First, a warning: the anatomy of the female fruit fly genital organs is not simple; refer to the figure for help. The authors first noted that Wolbachia accumulated in the Germ-line Stem Cell Niche (GSCN), the region at the end of the ovary where eggs develop from multiplication of Germline Stem Cells (GSC). These infected female flies produced about four times as many eggs as uninfected females. Could this difference be due to increased GSC mitotic activity? Employing three assays, including the use of antibodies to phosphohistone H3 to label cells in mitosis, they observed a two-fold increase in the mitotic activity of the GSCs. This was half of the answer, but what accounted for the remaining two-fold stimulation of egg production? 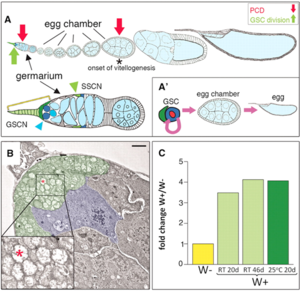 Wolbachia target the GSCN, and infection increases egg production. (A) Drosophila ovariole with the germline in light blue and the somatic follicle cells in white. Egg chambers are formed in the germarium (left) and mature into the egg. The upward-pointing green arrow indicates GSC (dark blue) division [see inset (A′): GSC divides asymmetrically, and one daughter cell exits the GSCN (green) and forms the egg’s germline (light blue)]. The downward-pointing red arrows indicate developmental points where the onset of PCD reduces egg production. The black asterisk indicates the onset of vitellogenesis. (Lower left) A magnified view of the germarium shows both the SSCN (green arrowhead) and the GSCN (yellow bracket), which contact the GSCs (blue arrowhead). (B) Electron micrographs of a GSCN (green) and the GSC (blue) in infected D. mauritiana. Most of the cytoplasm of the cap cells (GSCN) is occupied by Wolbachia (red asterisk). Scale bar, 1 μm. (Inset) Magnified view of the GSCN. (C) Fold change of total amount of eggs laid per infected female (W+, green) under different conditions normalized to noninfected females (W–, yellow). Relative egg production was measured at room temperature [(RT), 20 and 46 days (d), light green] or at 25°C (20 days, dark green). Wolbachia significantly induced fecundity gains at all conditions. Source.

Since programmed cell death (PCD) is known to regulate egg production in Drosophila, the researchers thought the increase might be due to inhibition of PCD. Using two different assays (TUNEL and visualization of dead cells), they compared PCD in infected and uninfected fly ovaries at two developmental stages. Although infection made no significant difference in PCD within the pre-vitellogenic egg chambers, Wolbachia infection reduced PCD in the germarium (a zone past the GSCN) to about one-half of that in uninfected flies. Thus, enhanced egg production in Wolbachia-infected D. mauritiana can be attributed to the additive effect of increased GSC mitosis and decreased PCD in the germarium. Once again we see that Wolbachia manipulates host reproduction to promote its spread within the population, here through elevated egg production by infected females. The research team also took a look at infected males and found that Wolbachia targets the hub, a niche in the testis that supports germline and somatic stem cells. Here, too, Wolbachia infection increased GSC mitosis. However, both the targeting and the upregulation of GSC division were much weaker than in females. The significance of Wolbachia activity in the male awaits further investigation. 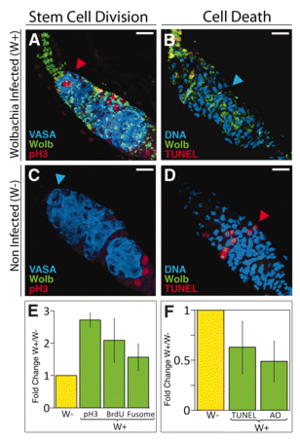 Wolbachia infection increases GSC mitotic activity and suppresses PCD in the germarium. Confocal images of D. mauritiana germaria infected [W+, Wolbachia shown in green (A and B)] and noninfected [W–, (C and D)]. Red arrowhead indicate the presence and blue arrowhead the absence of GSC division [pH3 (phospho-histone H3), red in (A) and (C)] or PCD [TUNEL, red in (B) and (D)]. Scale bars, 10 μm. E and F: Fold difference for each marker, normalized to W–. Infection significantly affects GSC mitosis (E) and PCD (F) for all markers. AO, Acridine orange. Source.

Does the number of Wolbachia in the GSCN correlate with GSC mitotic activity? In order to control for variable systemic and environmental factors, they looked only at infected flies, comparing niches that were highly infected against those with low degrees of infection in the same fly. This is possible since in a small percentage of infected flies some of the individual GSCNs harbor few or no Wolbachia. GSCs residing in the sparsely infected GSCNs displayed less mitotic activity compared to GSCs in highly infected ones. This suggests local modulation of stem cell activity within a niche by the resident Wolbachia. However, this data does not rule out possible contributions from systemic or possibly stem cell-specific signals. The nature of the many chemical signals elaborated by an endosymbiont residing in its host remains a challenging question for future research.

As biological phenomena go, increasing fecundity by a significant amount is an unusual and rather remarkable occurrence.  It can deeply affect the structure of a population plus it illustrates the great variety of ways that endosymbionts have evolved to manipulate their host to their own advantage.  In addition, such basic research may well have useful practical applications.  Thus, this kind of study may also reveal ways that we can enlist endosymbionts in our war against insect-borne diseases such as dengue fever and malaria.