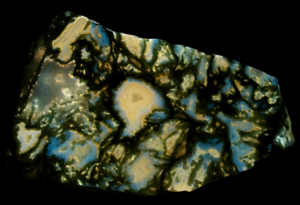 Sections of Rockyard Chalcedony (var. Agate) from Burns, OR. Except for the colors, might a section through feces look like this? Source.

In the celebrated novel The Rebel Angels, the famed Canadian author Robertson Davies mentions Ozias Froats, a fictional professor potentially on his way to a Nobel Prize for discovering that everyone’s feces reflect the maker’s personality. He did not have today’s ready recourse to metagenomics (that being still in the future), so he looked at "extremely thin slices of faeces, cut transversely, and examined microscopically and under special light.” He found that each person’s specimen reveals differences in individual temperament. It occurred to me that using this same approach could add another dimension to fecal metagenomics by determining the intra-turd location of individual species. This could readily be visualized using specific fluorescent-labeled antibodies on thin sections—merely a technical elaboration on Froats’ methods.

I know little about how feces are made (“turdopoiesis”) except that it involves dehydration of the colonic contents. In the process, some bacteria are surely displaced mechanically but others perhaps turn on their motility apparatus early in the process to travel to a preferred site, be it the edge or the interior of the creation. Do those species that cling to the mucosal surface or inhabit the mucus also get carried along? Or are they found mainly on the surface of the bolus? And what about prophages, which may well come to life as the result of bacterial stress? Sampling for metagenomics is easier to do with feces than with the insides of the gut, but at present we know little about the geometry of microbe-rich environments and their dynamics.

Froats saw much beauty in his work. He described what he saw in the sections as "splendid cuttings of moss-agate, brecciated agate, an extraordinary beauty reminiscent of ‘that chalcedony which John's Revelation tells us is part of the foundations of the Holy City’." Who knew? Anyhow, with individualized medicine upon us, perhaps standard laboratory tests in the future may include cutting sections of fecal samples for microscopic evaluation. Besides, this may give the person doing the examining unexpected visual pleasures.