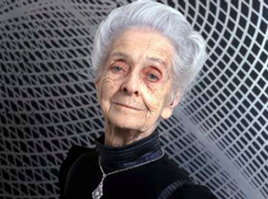 Editor’s Note: While it may be true that bacteria do not have neurons (at least not more than one per cell!), their modes of communication hint at a simple equivalent of a nervous system. But we need not apologize for the inclusion in this blog of a non-microbiological topic. The story here described has much poignancy and is relevant to all biologists.

The year 2012 was quite turbulent in Italian politics but it ended with a display of near unanimity. The reason was the posthumous homage to the oldest senator of the Republic and the oldest Nobel Prize winner, Rita Levi-Montalcini. In Italy, the President has the privilege of personally naming up to five senators–for–life, with all the legislative privileges and duties that entails. In 2001, President Ciampi appointed her to this post, which she held until her death at the age of 103 on December 30, 2012.

A School of Nobelists 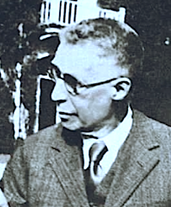 In a wonderful course of Embryology and Histology given in 1956 by Prof. Washington Buño in the School of Medicine in Montevideo, I acquired my taste for developmental biology, through the description of classical experiments such as those of Driesch and Spemann. I also encountered the name of Giuseppe Levi, who had visited the country a few years before and helped set up the first tissue culture laboratory in Uruguay.

Among many excellent scientists, three future Nobel Prize winners came from the laboratory of Giuseppe Levi in Turin. Salvador Luria got it in 1969 for the discovery of the mechanism of replication of bacterial viruses; Dulbecco in 1975 for discovering interaction of viruses and the cell's genetic material; and Rita Levi-Montalcini in 1985 for the discovery of growth factors. A cousin of Rita’s, Eugenia Sacerdote, also trained with Giuseppe Levi, and eventually introduced tissue culture techniques and the polio vaccine to Argentina. She died at 101 years of age, Dulbecco at 98, and Luria, nearly a youngster, at 79.1

From Marengo to Munich 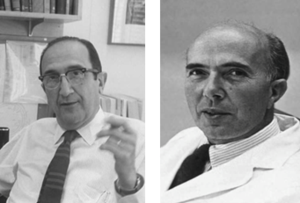 In 1800, Napoleon, the winner of the battle of Marengo, extended civil rights to Piedmont but following the monarchic restoration, the Jews were not fully emancipated until 1848. After the creation of the Kingdom of Italy in 1861, the Piedmontese Jews became the vanguard of Italian Jewry. Most were Italian patriots and liberal. Some Italian Jews were nationalistic and eventually became fascist, even participating in Mussolini’s 1922 “March on Rome.” Others were active antifascists, like the brothers Rosselli, founders of the “Giustizia e Libertá” movement, who were assassinated in France by the regime’s hit men. Giuseppe Levi, Levi-Montalcini’s teacher, started as a nationalist, volunteered as a doctor in the First World War, and eventually became explicitly and actively antifascist.

In 1938, Czechoslovakia was dismembered in Munich, while Hitler and Mussolini cemented their alliance and Mussolini discovered his own anti-Semitism. The 1938 “Manifesto of the Racist Scientists” proclaimed that the Jews were not members of the “Italian race.” Royal Decree #1779 followed and excluded Jews from all educational institutions. Giuseppe Levi had to give up his chair and laboratory in the Institute of Anatomy at the University of Turin. Luria followed the exodus of many others, going first to Paris until the debacle of 1940, then to Marseilles, Lisbon, and finally New York City. Dulbecco was drafted as a doctor and witnessed the massacre of his regiment on the Russian front and eventually became part of the anti-Nazi movement in Turin. 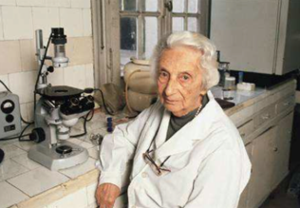 Rita Levi-Montalcini was born in 1908 to a well-to-do Jewish family. Her twin sister, Paola, with whom she remained close throughout her life, become an original and important painter, while elder brother Gino was a top architect. Overcoming family objections, Rita became a physician in 1936 along with Eugenia Sacerdote. Both joined Giuseppe Levi’s laboratory as students. Rita and Giuseppe Levi continued their research in Belgium after 1938, soon to be interrupted by the German invasion. On the train back to Italy, Rita read a paper by Victor Hamburger (a refugee from Nazism to the USA who also died a centenarian at 101 in 2001). Hamburger showed that ablating the wing primordium of a chicken embryo resulted in the decrease in number of the corresponding neurons in the spinal cord. Both student and teacher repeated and perfected Hamburger’s results in a clandestine improvised lab. In 1942, they published their results in an obscure Belgian journal.  Hamburger proposed that the peripheral tissue stimulated the formation of the spinal cord neurons. The Italians, on the other hand, suggested that the peripheral tissue inhibit the death of the neurons.

In 1943, Italy collapsed, with the creation of a puppet fascist state in Northern Italy and the deportation of Jews. Eventually, Rita emerged from a clandestine refuge in Florence, where after the liberation of the town she worked as doctor (and nurse) with the Anglo-American troops. Both she and Giuseppe Levi returned to Turin and the laboratory in May 1945. In 1947, Hamburger invited her for a short stay in his laboratory in St. Louis, Missouri for the purpose of resolving their different interpretation of the ablation experiments. The initial six months became thirty years.

The Road to the Nobel Prize

The differences between their results were soon resolved in favor of the peripheral tissues inhibiting death of the pre-existing neurons. It is arguably the first description of programmed cell death. A former student of Hamburger, Elmer Bueker, had implanted sarcomas in chick embryos and saw that the “type 180” sarcoma became invaded by nervous fibers, with an increase in size of the nearest sensory ganglia. Rita and Hamburger, with Bueker’s permission, repeated these experiments under a variety of conditions. In one experiment Rita implanted tumor fragments outside the embryo, in the corioallantoic membrane. The results left no doubts on the diffusible, soluble nature of the nerve growth-promoting factor released by the tumors. Hertha Meyer, another refugee and ex-student of Giuseppe Levi, had set up a tissue culture lab in Rio de Janeiro. Rita flew to Rio carrying in her hand-bag two mice with implanted tumors. Co-culturing tumors and nerve ganglia led to an exquisitely sensitive assay of the not yet named nerve growth factor (NFG). Stanley Cohen joined the team bringing to it biochemical know-how, leading to the purification of NGF. An unexpected finding was that the salivary glands of male mice were a great source of NGF. In addition, Cohen found another novel factor, that for epithelial cell growth. But what was the physiological role of NFG? This was determined by injecting newborn mice with anti-NFG antibodies. The result was a dramatic atrophy of the sensory and sympathetic ganglia. It was concluded that neurons that touched peripheral tissues via their axons transported NFG upstream survived, whereas those that didn’t, degenerated and died.

The discovery of growth factors depended on both chance and convergence. The role of intercellular communication in embryonic development had been discovered in the laboratory of Spemann in Freiburg, Germany, where Hamburger had trained. G. Levi studied development of the nervous system at a more microscopic level. Levi-Montalcini used a modification of Ramon y Cajal’s staining technique to distinguish individual neurons. G. Levi also pioneered the use of in vitro culture of tissues and organs. Hamburger had a holistic view of development, Levi-Montalcini a more reductionist and molecular one. Both visions contributed to our understanding of the nervous system as being adaptable, plastic, and not rigidly determined. NFG, named in 1954, was the first of a series of small peptide factors that stimulate cell growth or division, or inhibit programmed cell death. Nowadays, searching for it yields 51,295 entries. Growth factors may influence various cell types differently but are all recognized by receptors on the cell’s surface that transmit a signal that informs a cell of its fate: grow, divide, or even die. Their role in the immune response, in pathological changes, and in therapy has become central to modern medicine. Thus, the contribution of a deficit of NFG in Alzheimer’s is being actively investigated and discussed.

Life After the Nobel Prize

The 1986 Nobel Prize in Physiology and Medicine was awarded to Levi-Montalcini and Cohen, surprisingly omitting Hamburger. Since 1962, Rita divided her time between St. Louis and Rome, where she directed a center of cellular biology (1969-79), founded the EBRI Institute of Neurobiology, and kept up her scientific and community activities. In the Senate, her deciding vote ensured the majority for Prodi’s government (2006-2008), which earned her insults from right-wingers. She participated in the FAO Action Against Hunger. In 1992 she started a foundation to promote African women access to education. She wrote eight books. At one point, she declared that her brain worked better at one hundred years of age than at twenty. Rita Levi-Montalcini embodied the intellectual and ethical values that are the absolute opposite to the vulgarity and banality afflicted on Italy by the Berlusconi era.

Claudio Scazzocchio is Visiting Professor in the Department of Microbiology at Imperial College London. This article appeared originally in a shorter form in the magazine Brecha, (Montevideo) January 25, 2013, and is reproduced here in translation with a few modifications.

1The first graduate student of Salvador Luria was no other that Jim Watson. The description of Rita Levi-Montalcini meeting the not yet twenty years old Watson, is worth reading. The following is a very free translation from the Italian by CS. The time is “late autumn, 1947”, the place, Bloomington, Indiana.

“At the end of our conversation, Luria introduced me to one he defined as his most gifted student, who has joined his team not very long ago. It was Jim Watson, not yet twenty. He looked adolescent, with a blond tuft of hair, shading his brow, which in time would be replaced by precocious baldness. His engrossed and dreamy appearance, his strut and thinness, reminded me of a harlequin of Picasso’s blue period. He took absolutely no interest in my person, and left swiftly with a hurried good-bye. Later on, when the unknown teenager had become the famous Watson, our sporadic encounters were characterised by the same complete indifference to my research and myself. I was aware of his misogyny and his coldness never bothered me.”

1An inkling of Levi’s character, as a mentor and as father can be had by reading Rita Levi-Montalcini autobiography, “In praise of Imperfection” and in “Family Sayings”, one of the books of Giuseppe Levi’s daughter, the novelist Natalia Ginzburg. It may be of interest that Natalia Ginzburg’s son, Carlo Ginzburg is a major Italian historian.