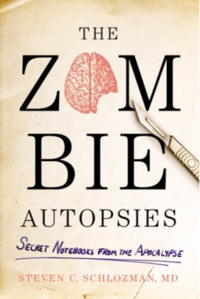 Steven Schlozman’s book, soon to be a movie. 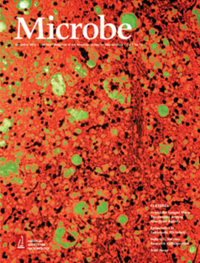 Electron micrograph of brain tissue from a monkey infected with the prion disease kuru. Between the rounded nuclei of the nerve cells (green) are tiny vacuole spaces typical of the disease’s dark spots. From the cover of the December 2012 issue of Microbe, the ASM Magazine. Image PHANIE/Photo Researchers, Inc.) Source.

Prions can turn their victims into zombies—they punch holes in their brains and steal their souls. The infected stumble about, might take a bite out of someone if hungry, certainly don’t think straight and, most important, lose their memories and with them the very essence of their humanity or “soul.” Zombie enthusiast and Harvard psychiatrist Steven Schlozman made the connection and has even written a science fiction novel, soon to be a film, about a prion-caused apocalypse called The Zombie Autopsies. In the book, influenza-like viruses with prion payloads, possibly concocted by mad scientists, cause a zombie pandemic that kill off a goodly portion of the planet’s humans; but not before the newly minted zombies stagger about trying to eat, and likely infecting, anyone they manage to fall into. Schlozman’s hypothetical disease, “ANSD” or Ataxic Neurodegenerative Satiety Deficiency Syndrome, is readily transmitted by coughing or sneezing.

OK. That neurologic prions turn people into “zombies” is a good analogy; sadly, that’s what seems to happen when Alzheimer’s and raft of other protein-instigated neurodegenerative diseases take hold. However, it’s unlikely that any amount of microbiological savvy could keep a tiny RNA virus schlepping around a prion or two afloat. And even if a few overloaded viruses manage to accidently plummet into an open nostril while struggling to stay aerosolized, it isn’t in the nature of prions to cause immediate disease. (More about prions from ASM.)

Pathogenic proteins accepted as infectious agents … but not without a fight

Notably, before Stanley Prusiner, a neurologist, stood his ground in the 1980s insisting that dementias could be caused by nucleic acid-deficient infecting agents, virologists were adamant in their belief that these strange diseases were caused by “slow viruses.” Emphasis was on the “slow.” Furthermore, dogma at the time held that “conveyers of transmissible diseases required genetic material composed of nucleic acid (DNA or RNA) in order to establish infection in a host,” Prusiner writes.

Prusiner lost both his promotion to tenure at the University of California San Francisco and his Howard Hughes Medical Institute (HHMI) grant by stubbornly defending his then heretical belief that “proteinaceous infectious particles“—or “prions”—could underlie inherited, as well as communicable, diseases. Such dual behavior was unknown and thus unthinkable at the time. “Virologists were generally incredulous, and some investigators working on scrapie and Creutzfeldt-Jakob disease were irate.” Prusiner got even at the Nobel Prize ceremony in 1997 and cautions in his autobiography: “While it is quite reasonable for scientists to be skeptical of new ideas that do not fit within the accepted realm of scientific knowledge, the best science often emerges from situations where results carefully obtained do not fit within the accepted paradigms.” He also got his tenure at UCSF and a much larger grant, but not from HHMI. Now, 30 years after he and his colleagues isolated a rogue protein that could cause disease in healthy animals, Prusiner says there’s enough evidence to support a unifying prion-like mechanism in neurodegenerative and, perhaps, other diseases.

Prion infectivity depends on a normal cellar prion protein (PrPC) misfolding into what’s known as the “scrapie” protein (PrPSC), and then corrupting the normal surrounding proteins. PrPSC is prone to aggregation, thus the misfolded prion proteins tangle themselves up as, for example, in Alzheimer’s disease, forming brain-destroying Aβ amyloid plaques. Alzheimer’s has recently proved transmissible in marmosets, thus proving beyond a doubt that prions can cause disease. And distressingly, grafted fetal brain cells can become infected with α-synuclein prions after they’ve been transplanted into patients with Parkinson’s disease. Prusiner conjectures that the disease-causing prions cross from the neurons of the recipient and corrupt the healthy fetal cells.

Prions can take on two different conformations. The one on the right, in a helical conformation, dissolves easily in water, and is relatively benign. The one on the left, in a beta-sheet conformation, tends to stick to other similar prions and forms plaques. These plaques disrupt the structure of healthy tissue, resulting in the "spongy" texture found in the brains of infected animals. Source.

Prions are also thought to be involved in amyotrophic lateral sclerosis; familial amyloid polyneuropathy, frontotemporal dementias, transmissible spongiform encephalopathies (TSEs) and their human variants, Creutzfeldt-Jakob disease, as well as kuru, a TSE spread by ritual cannibalism. Type II diabetes too is considered a prion-instigated illness, one of the very few non-neurodegenerative prion-related diseases so far described. But that’s because neurologists have dominated the field; however, this seems to be changing. 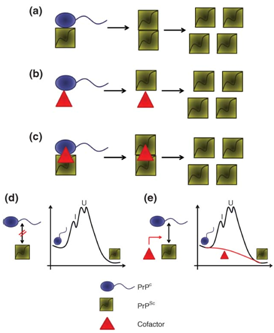 Cancer has recently been added to the growing list of deadly prion diseases by Jerson Silva and colleagues in Brazil. When cells are stressed, tumor suppressor protein, p53, triggers cell-cycle arrest or apoptosis—that’s as it should be,” says Silva. If this doesn’t happen cells keep cycling in an uncontrolled manner; typical cancer cell behavior. It doesn’t help that p53 is unstable and mutates easily after which, in true prion fashion, the misfolded proteins self-perpetuate by driving normal p53 into corrupted, aggregation-prone conformations. It’s a Jekyll and Hyde scenario, the normal p53 prevents cancer and its misfolded version seems to not only allow cancer genesis but to possibly even instigate malignant transformation.

“PrPC and PrPSC share the same amino acid sequence and are encoded by the same gene,” says Silva who has found evidence that non-coding RNAs (ncRNAs), the kind that used to be thought of as “junk,” play a role in prion conversion from normal to disease inducing. The transformation probably takes place during transcription. There’s a vast amount of ncRNA in the cytosol of normal cells and the prions might interact with it there.

“This [the conversion] process may be a molecular relic of biological propagation in early evolutionary times,” according to Silva. The ability to alter prion folding was likely acquired during evolution to enhance the ability of cells to rapidly diversify and adapt, adds Australian scientist Alan Munn. Munn also notes that “the phenotypic shifts in metastatic cancer cells occur in a spontaneous, rapid, and reversible manner that resembles what happens in yeast during spontaneous prion induction and curing.” Apparently the process is well conserved.

Although his work shows that p53 and other prions probably don’t act alone, ncRNAs are non-genomic nucleic acids and there is still no challenge to Prusiner’s “protein-only” status of prions, says Silva.

It’s highly unlikely that influenza viruses will ever vector neurologically pathogenic prions but don’t breathe a sigh of relief quite yet. We are facing a potential zombie pandemic—it just won’t be the kind Schlozman envisions in his book. 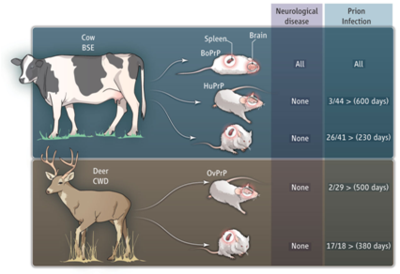 Transgenic mice expressing human (Hu) or sheep (Ov) PrP, inoculated, respectively, with BSE (Bovine Spongiform Encephalopathy) or CWD (Chronic Wasting Disease) prions, do not generally develop clinical disease, and were observed to end of life or culled for examination. The majority examined beyond 300 days showed evidence of prion infection in the spleen, whereas only a few mice had detectable brain infection beyond 500 days after inoculation. Bo, bovine. Credit: Y. Hammond/Science. Source.

Until this year, scientists believed that prions had difficulty passing from one species to another because of the so-called “species barrier effect.” This was called into doubt last January by Vincent Béringue and colleagues at France’s Institut National de la Recherche Agronomique. By implanting foreign prions into transgenic mice expressing human and sheep prion protein, these scientists discovered that lymphoid tissue (such as spleen and tonsils) was as much as sevenfold “leakier” to prions from other species than brain. So much for the long-established notion of an absolute species barrier. John Collinge at the University College London Institute of Neurology says lymphatic tissue is so hospitable to prions that “…propagation in the lymphoreticular system may precede, and in some cases even be necessary for neuroinvasion.”

Very worrying was the fact that very few of the prion-infected animals became clinically ill, suggesting that the persistent concerns of a silent reservoir of infection in the human population are justified. Silent infection in humans endangers the safety of the blood supply and because misfolded prion proteins are not denatured by autoclaving, transmission during surgical and medical procedures is also a risk. Thus prion experts are calling for the routine testing of lymphoid tissue in addition to the central nervous system in livestock.

These scientists are also calling for routine prion testing of tonsils and lymph nodes from people exposed to “mad cow disease” (bovine spongiform encephalopathy or “BSE”) as well as hunters who are at risk for acquiring chronic wasting disease (CWD) from North American cervids including deer and elk. And because prion transmission will come from healthy people, not those who already have the signs and symptoms of disease, Collinge argues for an intensive investigation of our currently used blood-tests to make certain they can accurately detect medically relevant prions; like microbes, there are a great number of different prions and they can speciate. These precautions are becoming increasingly urgent as the list of known prion-associated illnesses expands, he says. Thus a real prion-induced zombie apocalypse may ultimately prove more fact than fiction.

Schlozman, who emphasizes that he was “screwing around with medical speculation” in his book which is entirely fictional, comments about real potential risk of a neurodegenerative disease pandemic thusly: “The good news? We have science to keep our heads as the story unfolds.” He also notes that “Prusiner could have won his Nobel recognition for [his] increasingly rare gifts of intelligence and skeptical persistence. It always makes sense to pay attention to the one or two guys who manage to think outside the proverbial box.”

Editors’ Note: This is the fourth in what is expected to be an ongoing series about cells that might not come immediately to mind when you think “microbe.” The first, second and third links are here—Oddly Microbial: Ribocytes, Oddly Microbial: Cancer Cells, Oddly Microbial: 86-Million Year-Old Deep Seabed Mystery Cells. Comments and suggestions for future posts are encouraged.