The Gender Bias of Science Faculty

If you were a science professor, and you received two equally strong applications for the position of laboratory manager, one from a female, one from a male, which one would you pick? The answer may surprise you.

It is well known that women are underrepresented in many fields of science. Whether or not this disparity is a result of gender bias by science faculty has not been investigated. To answer this question, a randomized, double-blind study was conducted in which science faculty from research universities were asked to rate the application of a male or female student for a laboratory manager position. Identical applications were sent to all participants in the study, except that half (n=63) received materials from a male student, John, and the others (n=64) received materials from a female student, Jennifer. The faculty were then asked to rate the student’s competence and hireability, and the amount of salary and mentoring that they would offer. 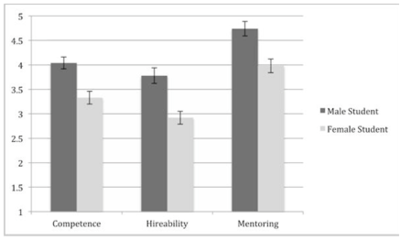 What might be the reason for the subtle gender bias observed in this study? The authors suggest that it is due to a belief that women are less competent in science than men.

The fact that faculty members’ bias was independent of their gender, scientific discipline, age, and tenure status suggests that it is likely unintentional, generated from widespread cultural stereotypes rather than a conscious intention to harm women.

I found the difference in mentoring offered the male versus female applicants most disturbing. An understanding and supportive mentor is an important component required for a successful career in science. Lack of encouragement and positive judgments may cause women to leave academic science before they reach university positions.

How can this subtle bias be eliminated? The authors suggest educating faculty and students about the existence and impact of bias within academia, an approach that has reduced racial bias among students.

We need more scientists in the US—one million over the next ten years, according to a 2012 report from the President’s Council of Advisors on Science and Technology. Achieving this important goal is jeopardized by faculty gender bias.

We discussed this work with Jo Handelsman, senior author on this gender bias paper, on episode #48 of the science show This Week in Microbiology. You can find TWiM #48 here.

This article first appeared in the Virology Blog and is reprinted by the author’s gracious permission.

Vincent Racaniello is the Higgins Professor in the Department of Microbiology and Immunology at Columbia University’s College of Physicians and Surgeons in New York City.